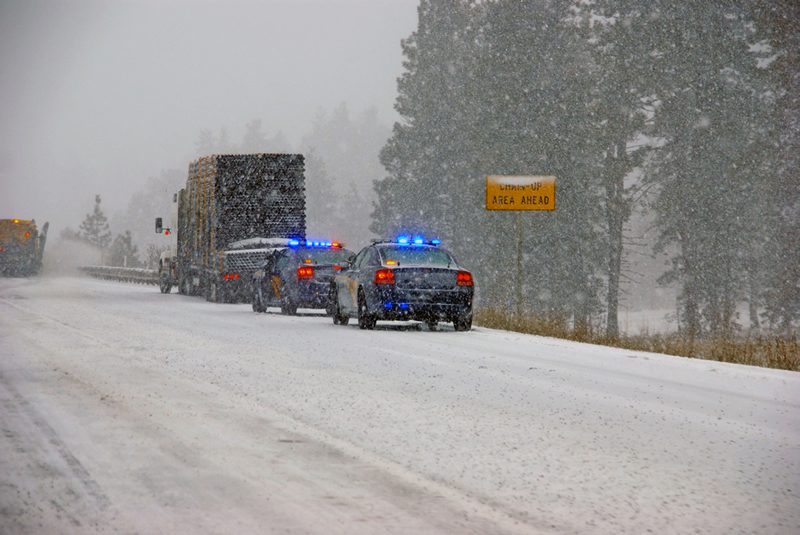 Often overlooked in evidence training are the considerations for inclement weather. Try as we might, we can’t choose the conditions crime occurs in, we can only develop the best possible plan to preserve evidence of the crime so that we can document, collect, and build our case as efficiently as possible.

Many parts of the country deal with harsh wind and wet snow in the winter months, and this can ruin many types of evidence before personnel even has a chance to get on the scene. But even with the rules of evidence, there can be some ways of salvaging what is on the scene that may not always be accepted practice under perfect conditions.

Collecting evidence at content-rich crime scenes is always a team effort. For many small agencies, a basic approach is to have one officer photographing, one officer packaging, and another documenting each photograph and each item. Collecting evidence in inclement weather will require at least three personnel if not four. And they have to work together efficiently if there is no other way around staying in the elements. Agencies should consider their manpower issues ahead of time, formulate a plan, and then practice that plan long before the call to a given scene takes place. The more rehearsed this team is, the better they can make use of their time because when working against the elements, time is of the essence.

Under such conditions, it might time to consider altering the roles, leaving one person to photograph and document in your evidence management system, while the remaining personnel focuses on collection, which will be the toughest task faced in this scenario. If your agency has less than three personnel assigned to evidence collection, it may be time to consider assigning more personnel for this set of circumstances or entering into a partnership with a neighboring agency for assistance when these scenarios occur.

Vehicles can present some challenges, but much of that can be remedied by a good old-fashioned tow truck. If the evidence is strictly within the vehicle, there’s no sense in placing officers in harm’s way by staying out in winter conditions conducting an inventory on the side of the road. Photographing as much of the inside of the vehicle, and then sealing the vehicle’s doors, windows, engine, and trunk compartments are a quick step to ensuring that all evidence is secure and preserved. With any luck, your agency has access to a garage or similar structure where the vehicle can be relocated for a full investigation.

In cases where there is evidence inside and outside of the vehicle, following the same steps for inside the vehicle apply, with the additional focus of documenting evidence on the outside. Again, photographing as much as you can initially alleviate a lot of burdens when trying to decide what items are evidence of a crime, and what is incidental to the scene.

When it comes to two of our more common discoveries, it can be a true “Russian Roulette” experience. Firearms laying in snow or rain are still relatively easy to document. Photographing, and documenting is still done the same, but what about packaging? Moisture sealed within the packaging can lead to rust, which can lead to destruction. What is the best way to preserve this evidence? One method that can save the day is a forced air can, like the one sold at many computer repair stores, or in bulk at a local wholesale store. While you likely won’t be able to spray away every bit of moisture present, you will be able to enough most, which will give you a sporting chance at packaging the firearm, which should later be taken by the investigator for re-examination, leading to an opportunity for the firearm to air dry. Of course, this method assumes there is no additional evidence on the firearm, like say, blood spatter. In that case, you’ll be moving too quickly to grab your air can, and your supervisor should be advising against it.

Narcotics can still be photographed and documented just the same as we always do, but again moisture plays against us. If it’s marijuana, it can lead to mold later. If it’s cocaine, it won’t change the evidence, other than make it very difficult to collect, as it becomes something resembling watery toothpaste. If it’s heroin, it’s more of the same in a different color. The list of substances and bad reactions to weather can go on for pages. The point is, we have to find a way to package this evidence in its alternate state.

There are some that may say the harder narcotics will be a loss, but one can still capture some of these items. A semi-unorthodox method of collection is to use the 30 mL fecal container with a spoon attached to the container’s screw cap. This is an item sold through many medical laboratory supply companies and is plastic. The spoon is small enough that you can collect a significant amount of the wet narcotics you’re dealing with while placing them in a temporary, sealable container for immediate re-examination indoors. This particular method is all about being quick, which means you should discuss it with your respective agencies before implementing it as practice. The biggest question is when is this type of collection necessary? Is it necessary with every drug arrest, or is based on the quantity recoverable? If it’s a minor amount of narcotics, compared to a larger quantity inside the vehicle, it may not be imperative to recover what’s on the ground.

In any event, while documenting physical evidence in harsh weather conditions, decisions have to be quick, and that means they have to be thought of ahead of time. There are some decisions that will have to be made at the moment, but much of what we encounter regarding evidence can be planned for.

As we stated before, photographing and documenting is completed with the comparative ease of collecting. And in the case of blood spatter, photography in bad weather might be your best tool in evidence collection.

One additional step that is not optional in this evidence collection is covering it in a way that saves the scene from a further weather-related breach. Blood trails and DNA present a specific challenge, and if we designed our collection team to move quickly before, we need them to double down on that speed when documenting and collecting this evidence.

Because trails can be inconsistent, finding an effective way to cover them further disturbance is unlikely. What might be our most effective method of dealing with a blood trail in the snow is once it has been found, to have the photographer take overhead shots of the pattern until the end of the trail is reached. During this time, the two remaining members of our team should focus on capturing samples at the beginning point we’ve established, and working as quickly to catch up to our photographer, who should be placing a marker at the end of the trail. As the two members work towards the marker, the photographer should assist with any measurements that need to be taken, be it for the distance of the trail, or for a sample of the trail pattern. After these primary tasks are completed, if there are any other considerations to be made, the team can proceed. Keep in mind that this is one possible method of handling this scenario, there are always other ways that your agency may deem a better method.

Peripheral bloodstains or blood spatter tend to give us important information about the violent act and thus become intimately important to solving elements of the case before us. A number of tent systems exist that intend to shield such stains from casual interference, but inclement weather overpowers these items every time. Another unorthodox method is placing large size Sterilite, or other similar style plastic containers upside down with the lids removed, placing a counterweight on the top, in case you’re dealing with wind. This won’t solve the problem, but it can buy more time than cardboard can, keeping the elements, and temperature changes at bay for some time.

We’re not covering every possible item that could be evidence. We’ve focused on three items that are common to investigations. Hopefully, the concepts used in each can help you formulate a plan for other items you might deal with.

The main point here is that a team is necessary when documenting, collecting, and packaging evidence. Especially during inclement weather, the team you put together can enhance the process, or hinder it, depending on the plan you’ve put in place. Specialized training, assigned roles that a specific while allowing the team leeway in altering roles as needed, and having tools and policies in place that guide the process are crucial. Collecting evidence during inclement weather is a race against the clock, not only for the sake of collecting evidence but also for the safety and health of your personnel. Make sure your plan, whatever it is, addresses those concerns first, before anything else.