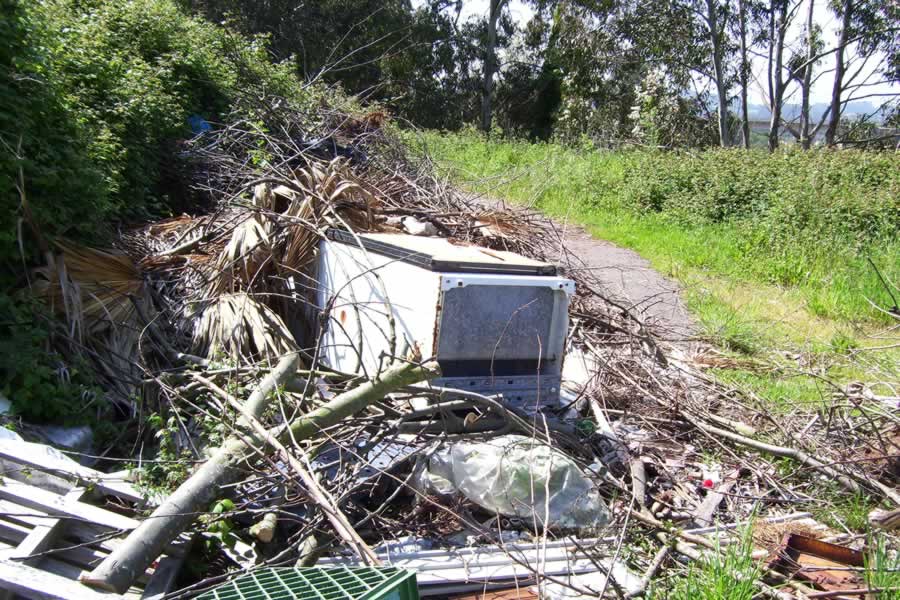 An oft-overlooked crime of importance in law enforcement involves a Misdemeanor offense that’s typically not arrestable on sight. Illegal dumping is a crime by which a person or persons, absconds responsibility of managing waste they have produced, and relinquishes it by leaving it in unauthorized areas. From ditch lines, unoccupied dead-end roads, to city parks, utility easements, alleyways, and even residential greenbelts, there are virtually no limits to where illegal dumping can be found. But, there are some considerations to make from a broader investigative standpoint. While many illegal dumping incidents are perpetrated by people who are attempting to avoid landfill or disposal fees, there are instances where closer examination of illegal dumping should be investigated. Let’s review some scenarios your agency may be exposed to and discuss some additional tactics and strategies that your agency may want to employ.

With illegal dumping, usually the cart comes before the horse. An officer is assigned to a call of illegal dumping, and when they arrive, something acutely obvious is located in the trash that suggests this is not the typical pile of garbage. History will always alert us to such incidents that sparked a homicide investigation. These are always worth reviewing. However, it is safe to assume that this scenario is a “lottery ticket” type event, and that while it is possible, it is unlikely to occur. But, because of these historic examples, policy addressing illegal dumping must be created, and that means that upon finding, or being called to, illegal dumping, your personnel needs to treat the incident as a potential crime scene, don protective equipment, and dig through the trash. An important note to make, that if this is an enforcement strategy your agency intends to employ, you will need to address your personnel treating these incidents as a crime scene. Remember, if you end up finding evidence of a crime, expectations of evidence handling will be expected. Officers should be documenting illegal dumping by photograph and video, or at least one of these two methods. Documenting how the illegal dump was formally discovered, starting with a general “geographic-oriented” photo/video, followed by the specific “trail” the initial, and subsequent, officers took will be expected. Also taking photographs/video of how the bags of trash were tied. While this may seem tedious, the way bags in illegal dumping cases are tied can be useful, as they can assist in revealing the identity of the person(s) responsible.

While a grizzly homicide may not be found, here are some more common examples of crimes that may be discovered through examination of an illegal dumping: identity theft, burglary, stolen property, arson, crimes against the elderly, sexually-based crimes, crimes against children, fraud, production of illegal munitions, drug manufacturing/processing, and counterfeiting. While there are surely examples of other crimes that have been discovered through illegal dumping, considering the examples we just provided, one can safely assume that inspection of all illegal dumping is necessary. Of course, there are exceptions. Officers may respond to a call of illegal dumping, and upon arrival, discover that all the trash left at the location is spread thoroughly, and consists of nothing more than household waste with no suspicious items, markings, or signs of dubious intent. In such instances, officers can close the call, refer the matter to public works, waste management, or the county jail (litter pick-up detail), and move on. But, if there are whole bags, responding personnel may want to radio for additional assistance (whether those officers want to help or not!), and ensure there is no evidence of additional crimes.

What Can be Done with Illegal Dumps?

Let’s assume in this example of bagged trash, that there is nothing concerning additional crimes, outside of the illegal dumping itself. What can we do? We have a few officers who have waded through trash, likely have a stench following them, and we’re none the wiser. That’s where the use of deduction should intercede. For one, we know that we are dealing with multiple bags of trash, they are close together, likely were tied the same way, and may even have a generally similar shape. One of the first things officer should be looking for is documents that denote identity. When they do find them, they need to document with photographs and/or video where they were found in the bag. It’s not necessary to point out each specific position, it’s more about the timeline of discovery. Any personnel that has been assigned to such incidents will tell you that in many of the cases that were purely illegal dumping, multiple documents bearing the name of one or two people were found over and over again during the described process. These are good clues to put together and treat as evidence.

Once all of the identifying documents have been found, another type of clue that may be within the bags are pictures. Believe it or not, people throw away pictures that no longer have value for them. But, they have excellent value concerning illegal dumping, because those pictures tend to contain at least one of the people you have already identified through the documents. At the scene, you won’t know it, but the picture becomes a very important piece of evidence, especially if any follow-ups are to be conducted. Another clue that comes up more often than not are items of a personal nature. They could be customized clothing, family heirlooms, or other unique items that identifiable to the owner. It may come as a shock to think that personal items that seem to hold greater value than money would be thrown away by a person who owns them, but it happens quite a bit, and with these three pieces of unique evidence, officers have the ability to start building a case against the persons responsible.

Officers will need to exercise restraint in contacting the identified person(s) from the documents found right away. Instead, it is better to use those documents, which could be as easily traceable as utility bills, to identify the most recent address for them. At the same time, using Google Images, Facebook, or even Instagram as an open-source search to see if the named person in the documents lines up with the pictures found in bags is prudent. If a match can be identified, then documenting those matches, over as many locations that can be found, are also helpful in developing the case further.

Officers use the information to contact the identified person, but rather than going into the contact with a “full-court press” on the incident in question, starting from a casual set of questions is better, to build to a logical conclusion. Asking them if anything unusual has occurred on their property, if they’ve noticed any personal items missing, if they’ve experienced identity or credit issues in the immediate past, are all ways of eliminating possibilities, until the conversation can be singularly focused on the matter at hand. You can also ask the person if they can identify items found during the recovery of the illegal dumping. Generally, showing the person pictures of the items, or the items themselves are acceptable, so long as the items have been properly packaged. At this point, the person may become suspicious, which is an indicator of their involvement in the illegal dumping. But if they freely identify the items, there is reasonable suspicion they were involved in the illegal dumping. Previously established agency policy will dictate how to continue from here. It may be that once this conversation is recorded and documented, that the investigation is referred to a detective. It may be that the officer handling the case refers the matter directly to a prosecutor for further consideration. It may also require that the officer escorts the person to the agency office to elicit a written statement from the person concerning what was discussed, and to then refer the case for further action. What is important to note here, is that no arrest will be made for mere Illegal Dumping. Instead, the person will be free to go as soon as the conversation, or written statement, is obtained, and any further action is at the discretion of another party.

From the agency’s standpoint of meeting public safety standards, this process will likely prevent this specific person from ever illegally dumping trash in their community, ever again. By being meticulous in the investigative approach to illegal dumping, an agency can virtually eliminate a health and safety nightmare that is oft-overlooked, due to competing priorities. Especially in smaller, rural communities that are under heightened growth, this type of approach to illegal dumping creates a scenario where offending parties become acutely aware that their activities can re-visit them in a very embarrassing manner. There will always be some that do not flinch at such efforts, but more will than won’t, and ultimately, while misdemeanor type crimes are difficult to follow-up on to a logical public safety-oriented conclusion, a show of proverbial force can typically be all that is needed to change community behavior.