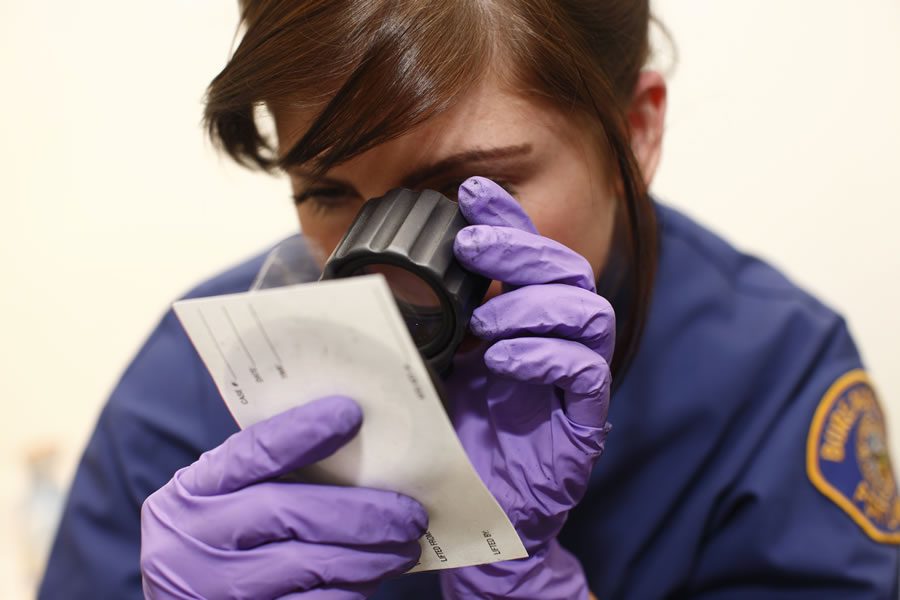 Over the last ten years, law enforcement across the country has seen an upswing in financial crimes. From Embezzlement, to Blackmail, to Check Fraud, whether you are a seasoned street cop, or a newly sworn-in federal agent, you are likely going to be tackling a financial crime as part of a larger investigation. Many criminals are transient, willing to travel across multiple States to avoid being detected as quickly, and they use financial fraud to fund other criminal enterprise, and their own lifestyle. Police can no longer afford to not train field personnel on how to identify crimes that are potentially involving financial fraud, because many of the current fraud trends are based as street crime. One such trend that has become all too familiar across most of the county is our focus in this article: The Felony Lane Gang.

What Is the “Felony Lane?”

Most people go to the bank, and prefer to use the drive-up lanes, then go inside. It’s quicker, we live in an on-the-go society, and it accomplishes the same task without losing time to parking, getting out of the car, standing line, and losing momentum. Most people use the lanes closest to the bank to conduct their business. As it turns out, people do prefer making eye contact with someone they are conducting business with. But, there is an innovative group of criminals hailing from Fort Lauderdale, Florida who have exposed a weakness in bank drive-up lanes. As it turns out, may of the far lanes at banks are too far away for bank personnel to see who is at the drive-up. That means anyone can drive to that far lane, pass a bad check, and it’s too difficult for tellers to make a clear comparison between the identification presented, and match the face of the person presenting it. Thus, the outside drive-up lane has been labeled the “Felony Lane.”

There is court documentation that suggests the Felony Lane Gang has been in operation since 2004. They originate from Fort Lauderdale, Florida. The racial makeup of the groups is usually black males, and white females. They use rental vehicles and stay in hotels while they drive Interstates throughout the country, typically during seasons of fairer weather (think late Spring through early Fall), and target white females who leave their purses in their vehicles, typically while they are on playdates, taking their children to day cares, parks, or other events. This presents a perfect backdrop for these brazen criminals, who break into vehicles, steal the purses, and flee the area. They will attempt to break into every vehicle they possibly can in one incident. It is not uncommon for law enforcement to respond to half a dozen or more vehicle break-ins at a park when the Felony Lane Gang is in town. Another point of interest, when we typically think of gangs, we think of well-organized criminal enterprise, controlled by a chain of command. While it is true this gang is well-organized, there does not seem to be a true hierarchy within the organization. It seems as though the 100 or so verified members all do know each other, but none are specifically in charge of another.

When this group takes the purses, the clock begins. The female half of the gang will raid the contents, looking for checkbooks, ATM cards, credit cards, and identification. The more they find of either, the better they can operate. They start with the identification, deciding who of their female counterparts most closely resemble the victim. The females routinely use make up, wigs, and sunglasses to pull of their identity theft. As they approach the outside lane to cash a check to themselves, they will have another member in gang use another drive-up lane to create a distraction so that teller loses concentration on the task of verifying identity of the criminal in the outer lane, instead cashing the check and providing the proceeds to the criminal. With that, their work is done, and they repeat with as many victims as possible. In some instances, some communities have seen as many as 300 victims in one day.

Easily, the Felony Lane Gang is responsible for millions upon millions of dollars in fraudulent check crime, not to mention credit card fraud. In those instances, they use credit cards to purchase high dollar electronics and boutique items at local shopping malls. This means that a law enforcement agency could be investigating car prowls/break-ins at a daycare center, check/wire fraud at a bank, and retail fraud at a mall, and all three calls are directly related.

Law enforcement needs to have a sophisticated strategy ready to go when it comes to this criminal organization. They have been found in operation as far west as Arizona, and as far north as Massachusetts, stretching to Iowa and Minnesota. There are a number of elements to their crime spree that can be used to law enforcement’s advantage, when trying to thwart their efforts.

If your agency is anticipating the arrival of the Felony Lane Gang, you need to consider some things as it relates to your patrol shifts. Are your officers making a regular habit out of making their presence known at local parks, or other locations where mothers and their children frequent? It may not seem like a priority, but the simple act of having marked patrol vehicles and officers within sight can prevent Felony Lane members from acting. Keep in mind that many of these criminals have previous histories of drug dealing, and firearms crimes. The whole reason they’ve got into check fraud is that on the surface, it’s not as dangerous, and comes with a better pay day some of the time. Just by virtue of their histories, these criminals will try to avoid being seen by law enforcement. However, do remember officer safety priorities. Felony Lane members have been in many high-speed pursuits, and some have attempted serious bodily harm of officers. Just because they won’t want to act in front of officers, doesn’t mean they’re above assaulting officers.

When officers are on patrol, is there a unified effort to address crime prevention matters? If so, officers should be encouraged to casually inspect vehicles that are parked at the types of locations targeted by Felony Lane Gang members. If officers find vehicles with purses in the open, or other high dollar items, that is the perfect opportunity for officers to place a business card, or agency crime prevention literature. First, it causes the owner of the vehicle to contact your agency, and allows your officers to inform them of the potential victimization, and this re-enforces that officers are pro-actively working on behalf of citizens. Second, if members of this criminal gang see police literature and contact information on a vehicle they want are wanting to victimize, this gives them major pause to not only cease their activity, but get out of the area completely. Repeat this cycle at enough target locations, ahead of their presence, and you’ll likely induce enough panic in the group to leave your community for good.

Another tactic comes from community policing philosophy. An old, unknown officer once said “a police officer is only as good as his informants.” These days informants are thought of exclusively as criminals who tell on other criminals, after they are caught themselves. But this quote is in reference to an officer working their area to the point that they are on a first name basis with the people who are regularly present. Whether it’s a business owner, apartment dweller, home owner, and even a homeless person, law enforcement officers should know all the regulars in their beat/district, and make it a point to known these people well enough that they will talk to officers about things they see. Friendly, polite conversation never hurt anyone, and your supervision shouldn’t be against it either. The more you build rapport with the workers, store owners, and residents, the more you’ll find out about the stranger things happening in the area. But, to be specific to this situation, assuming your area has a hotel or two in it, becoming friendly with these people is rather helpful, because they know who’s checked into their business. As we mentioned before, this gang uses hotels so they can travel longer distances in furtherance of their crimes. Having great rapport with hotel staff means they’ll be willing to tell you when three or four rental cars show up, and everyone is producing Florida driver’s licenses, paying cash for their stay, and no one is wearing wedding bands.

Sure, it doesn’t amount to probable cause, but it does give you reasonable suspicion, enough to take a closer look for yourself, when you wait for the suspects to gather and drive into your community. The more information you can obtain ahead of their crimes, the easier it will be to make a case later, but also potentially prevent their crimes altogether.

We did mention that these criminals wait for fairer weather to operate, but just this week, members of this gang were arrested in Maryland, Louisiana, Tennessee, and Missouri. With the exception of Louisiana, none of the weather is fair in these locations right now. It’s quite possible that these members are changing tactics in hopes of catching law enforcement off guard. Don’t let them victimize your community. While all crime is equally problematic, a “gang” that tries to pray upon jurisdictional boundaries, busy mothers, and sensitive locations deserve no rest. Simple patrol tactics can make a huge dent in the expectations these brazen criminals have moving forward. The more you can do to disincentivize their efforts, the more likely they are to move onto something else.