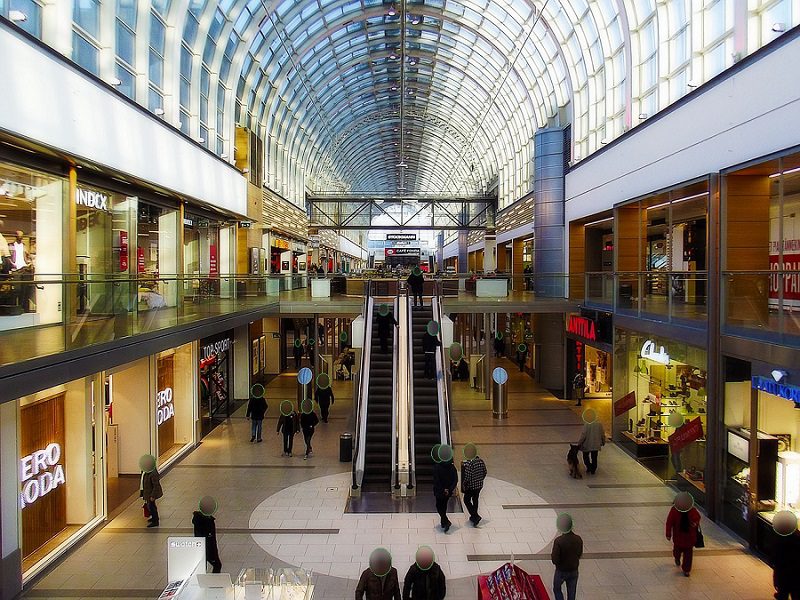 CCTV Security Cameras Most shopping malls install CCTV security cameras to help monitor common areas of the mall like food courts, walkways, and parking lots. Some malls also employ human security guards to monitor the cameras and make random inspections around the mall and patrol parking areas. Crimes in shopping malls usually follow a typical pattern and can include shoplifting, nuisance behaviors, or even robberies. Shopping malls located in affluent areas are likely to attract a greater number of car thieves too. CCTV security captures excellent image quality and provides security departments with a clear picture of the mall surroundings in real time and recordings.

Since most malls use security guards to monitor their CCTV security cameras consistently, it is crucial for employees to understand how to detect criminal behaviors while monitoring the live video. CCTV camera systems should be well placed for it to capture the best video. The presence of these security cameras alone can also deter crime. Security cameras can also be used to monitor employees when they are working the cash registers to avoid thefts. Some shopping malls can also contract with local professional security companies to help monitor their shopping centers. In the end, this can save the mall significant time and money.

Shootings in shopping malls aren’t new occurrences across the country. Mall security must always be on the lookout for this possible threat. Many mall security departments review and update their security plans today to prepare for this potential event. Shopping centers should always be prepared for emergencies of any kind, be it shooting, bomb threat, or weather emergency. Security experts consider retail malls as soft targets. That’s because you have an influx of people entering and exiting the mall through multiple locations. Such an environment only makes it easy for an active shooter to enter and exit the building quickly. This puts shoppers and employees at risk. It is crucial for shopping mall security departments to establish a good emergency preparedness plan at all times.

Shoplifting is a big problem for every retail mall. It’s in order for the mall security force to be trained on rapid response for this type of threat. They should also be in the know for shoplifting laws of the state (These laws can vary from state to state). Mall security personnel need to know how and when to confront a shoplifter safely. CCTV cameras can help in this area by recording the event. This data can easily be turned over to local law enforcement to aid in an investigation.

Despite these outstanding Pros of CCTV surveillance in the shopping malls, there are also disadvantages which can arguably slow down the effectiveness of CCTV solution.

Video Redaction is the Solution

The prevalence of video recordings from smartphones, dash cams, body cams, and CCTV cameras, surely means that privacy becomes the elephant in the room, especially in light of the laws such as the Freedom of Information Act, CCPA, or GDPR.

Video redaction comes as a viable solution, as it is used to blur sensitive and personally identifiable information that people wouldn’t want to be revealed. A typical workflow (outdated) involves simple detection, tracking, and manual intervention. However, automated methods rely on the accuracy of detection mechanisms being paired with robust and reliable tracking methods across the video sequence to ensure the complete redaction of all sensitive data while minimizing spurious obfuscations.

Video redaction protects the privacy and identity of innocent bystanders, minors, passers-by, and undercover police officers. It also involves obscuring identifying information within individual video frames. Identifying information that can be redacted often includes; faces, license plates, identifying clothing, house numbers, tattoos, computer screens, and so on. Video redaction, therefore, means that such data will be blanked out or blurred within a region, e.g., applying a tight crop around a person’s face. Alternatively, it can involve blanking out the whole frame save for the portions that are not considered private.

Today, one thing is for sure, public cameras and CCTV surveillance can be extremely helpful. On the other hand, heated debates have also arisen about the intrusion of privacy through potential abuse of the surveillance cameras involved. Besides, there are always crimes that will never be deterred by surveillance cameras. Video redaction can be the missing link to iron out the difference between video monitoring and privacy concerns. It provides a balance between public safety and personal privacy that has been often forgotten or ignored by most authorities.

It is fair to conclude that the benefits of surveillance greatly outweigh the disadvantages. One can only imagine how bad the situation would be, suppose there were no public security cameras at all. There wouldn’t be much concern about privacy violation if you behaved in public places because security in public places is always the top priority. However, the term ‘behaved yourself’ is arguably too wide for some people. we suggest you get the best video redaction software today and get rid of all your worries.

In today’s retail business, surveillance is a necessity. Surveillance systems are used to deter theft, reduce insurance rates, and to improve customer experience.

A casino may look a lot more exciting than a bank lobby, but if you break it down on a transactional level, casinos are also banks. Data security and data privacy have real consequences for companies that collect and retain the information as well as the consumer on whom the information is collected.

License plate detection and redaction can be fairly simple for the complex machine learning AI-based video redaction software. The data to be searched for or tagged is entered by the information specialists or trained law enforcement officer and the system then searches for all objects that match the data set within the video.