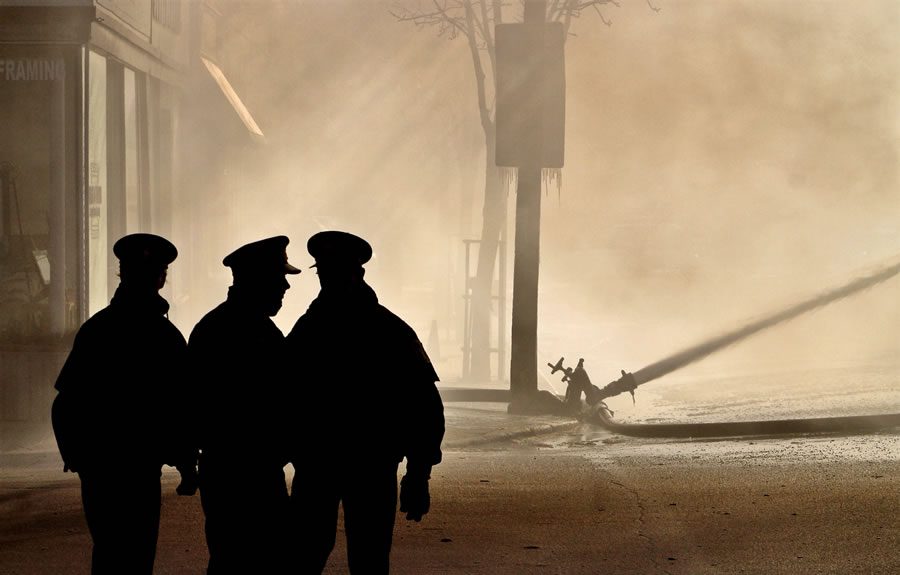 Many law enforcement agencies don’t have the resources to prioritize public property damage that isn’t directly linked to crime. Roads being gouged by farm implements, cars parking on curbs and cracking the curb form, street signs being knocked down partially from ATV’s, or torn down by teenagers late in the night, if it’s not witnessed, the end result is a radio call to Public Works, and the taxpayer bears the burden. We know law enforcement cannot solve every crime that happens, but when it comes to infrastructure damage, they can become some of the largest expenses of the year to repair or replace, and the evidence is almost always digital in nature. No one is going to carve out a chunk of asphalt and log it into the evidence room, unless they’re looking to jack their performance reviews up for the next four years.

Imagine it’s 4:25 AM on a Sunday. You’ve had zilch for activity on shift, and your patrol log looks like a security company’s check-in sheet. It’s so dead, you came upon a parking violation and wrote it. As you’re heading down the next street, considering a final lap into the station to wrap the whole dead night up, you come across a car, blocking an alleyway, and it’s clear that something is wrong.

You get out of your car, and notice several dead cuts in the roadway, in front of where the car is. Light the cabin of the car up, you notice no one is in the car. You begin looking under the car, because the front tires seem to be at an unnatural angle. And notice that the drive shaft is completely dislodged from the car. Looks like you found your eleventh-hour caper partner!

The car has clearly been in a collision. It’s vehicle to property, in this case the road is the “victim.” And since no one is here to claim the car, you’re staring down a charge of Leaving the Scene of an Accident (substitute your State’s Statute language on your own). In this case, our next step is taking pictures. Documenting this scene is crucial, because you need to show the vehicle, and its relation to the damage of the road, and how the drive shaft has a unique build that could only explain the deep cuts you’ve found in the road. Once you’ve documented the vehicle, it’s condition, and the damage, if you haven’t already, it’s time to run the plate. With any luck, the registration is current, and gives you the address of the owner. Now it’s time to knock on a door, long before anyone wants to answer.

At this point you could be dealing with a stolen car that broke down before the criminal could get it on the road. This field interview that’s going to happen at the front door, has to be handled carefully. Good thing you’ve got a body-worn camera available and recording.

A middle-aged woman answers the door, you introduce yourself and ask if she owns the vehicle. She says yes, but her son drives it. Now we’re getting somewhere, but it’s another quirk, it’s a juvenile. She calls her son on the phone, which is strange, seeing as he presumably in the same house right now, but hey, it’s a tech world, right?

Her son comes to the door, he could be under the influence, but it’s not clear at all. You ask him about the car, and he says right away that he was going to friend’s house, he heard a large crash as he entered road, thought he hit something, and he managed to back up into the driveway, but then says he had to actually place it in neutral and push it back into the alley. He decided to leave the car, because he couldn’t push it all the way back home and thought he would ask his dad for help in the morning. In one fell swoop, we’ve established Leaving the Scene of an Accident.

Once you mention a citation for Leaving the Scene, the mom gets on the phone with the dad, who happens to live in a separate residence, next door to the one you’re at right now. As you write the citation, the dad arrives and he’s mad, but surprisingly not at his son. He’s instead mad at you, for making a “bigger deal out of the situation than necessary.” Opinions can vary on this, we ask that you make a call on that later.

You write the citation, the dad asks where the car is, and you tell him it’s being impounded. Then he goes ballistic. Because he believes he should just get the car back. Unfortunately, that’s not policy, so you’re doing your job. He continues to get agitated and yells because you won’t do things his way….good thing that camera is recording, right?

Back at the scene, your partner has been monitoring the tow and logging it into the records management system. The dad shows up from the alley, and begins yelling about the car being towed, and that it’s not fully hooked yet and it needs to be dropped. You tell the dad to go home, and he says he doesn’t have to. You inform him that if he doesn’t leave the area, he’ll have charges for Disorderly Conduct. He looks you up and down, and then storms off, yelling at his son. What a winner.

After the car is towed, you get back to the station to process the collision report, the self-initiated call, and the report concerning the charge, the dad shows up at the station, again screaming, and yelling about getting his car out of impound. You explain that because the car is inoperable, he needs to secure a tow truck to take the car out of impound, before his payment for the impound can be accepted. He quickly secures the tow truck that has taken his car to impound (yes, that happens), and pays his bill, and then screams he’s not paying the ticket his son got. That’s when you inform him that’s fine, because he has a court date to attend for the incident. The dad storms off again, luckily for the rest of the shift.

The paperwork is finished, now it’s time to upload all the pictures and camera footage of the incident. This very simple case, that was turned into a three-hour disaster, despite everything moving as smoothly as described (thanks to your professionalism), now rests on potentially the easiest part of the equation, logging the evidence of the crime.

You’ve got pictures showing the vehicle’s condition, the damaged road, and the video of the interview where the juvenile openly admitted to his actions with the vehicle. After all the reports, all the graphs, and all the abuse, uploading goes very smoothly, with the digital evidence automatically linked to the case number that produced from the self-initiated call. The digital evidence uploads even quicker because the system you have analyzes the geo-tags and location data to build the addressing information, along with the registered owner information, logged to the call. And with minutes to spare on your shift, the case is done, and the crazy shift is over. All that’s left for the case is to get a written estimate from the Roads Department concerning the cost to repair the road.

This is the type of case that doesn’t always get written up. Minus the overbearing dad, this whole scene could have taken an hour and half, dependent on the speed of the tow truck. But, what you may have not paid attention to in our story of small-time crime, is that the software used in this system, from CAD, to RMS, to DEMS, all worked succinctly, making the process much easier on you, the officer. Does your system work with your personnel in mind? Or does it work with a vendor’s bottom line in mind? If these systems aren’t working together and pushing data to the next logical conclusion in the chain, then it’s time to change your system. If you have competing software, you could easily turn this minor situation into a six-hour ordeal, which is a big reason officers don’t pay any mind to these types of scenarios, depending on where they are working. Sure, they’ll address the vehicle blocking the alley, but they’ll try to minimize the situation as much as possible. Think what officers would be motivated to look into if their entire system removed redundant entries, automated the entry process, and knew exactly what they were doing as they were doing it?

You want your officers to deal with problems that affect your community, and believe it or not, people tearing up your roadways cost you far more money than you may realize. In this scenario, those deep cuts turned out to be $1,500.00. Imagine that scenario playing out seven times in the course of two months in one neighborhood? If you stretch that math over a one-year period, half of that expense could likely purchase three systems as described (CAD, RMS, DEMS), that would make your officer’s lives easier, and empower them to go after crimes like these, that perpetually get overlooked due to priorities.

It’s worth thinking over.