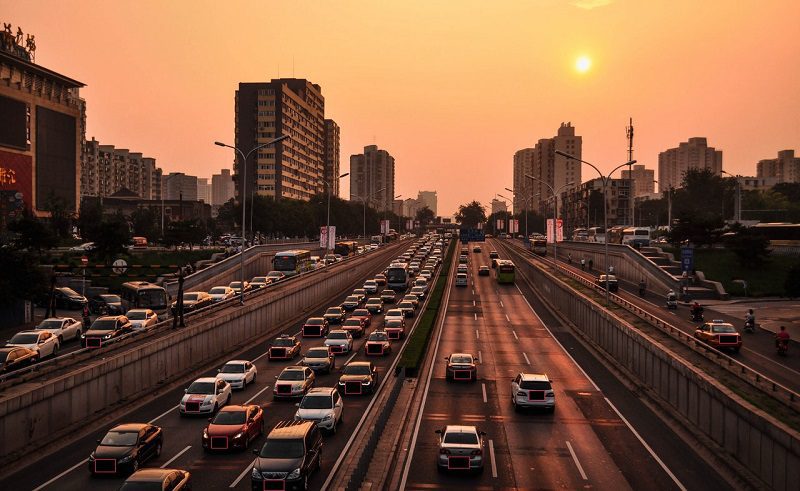 In recent years, the world has experienced significant growth in road traffic. Road Traffic has forced road network managers to optimize the use of existing infrastructures and to provide drivers with reliable and comfortable conditions. Severe traffic disruptions, such as congestion and accidents, require real-time control of traffic conditions and the rapid implementation of suitable traffic management measures. To achieve this important target, road traffic video surveillance systems appear as an indispensable tool.

Traffic congestion is one of the major challenges that governments all over the world continue to grapple with. Some governments that are viewed as successful in the area of traffic management have done so through proper deployment and utilization of modern technology. However, this has not come without its fair share of criticism.

Research on privacy concerns suggests that people assess for which purpose data is used and weigh the benefits that providing their data may offer them. When these benefits are of immediate personal relevance (medical services, commercial gain), most people are willing to share their data with the organization asking for them. They do make a trade-off between the amount of data requested and the benefits received in exchange. Asking for too much data can quickly lead to a sense of being watched rather than being serviced. The benefits of data sharing that have a broader social goal are less easily accepted as a worthwhile trade-off.

Human rights crusaders have argued that deploying surveillance equipment in public places is a violation of citizen’s privacy. Therefore, setting up a good case for the utilization of video redaction technology. Evidently, technologies such as video cameras and CCTV are quickly becoming a common feature of many cities in America. This has even become worse with the uprising of ideological warfare and terrorism. In a country that believes in democracy, it worries the citizen when police use advanced surveillance technologies for public security.

The implicit reason for the recent move to improve video surveillance is the possibility of terrorist attacks. But suicide bombers are clearly not deterred by video cameras-and they may even be drawn to the tv coverage that cameras could guarantee. The terrorists’ main aim is to strike fear within the population, sometimes bombing and suicide attacks may not inspire more fear compared to when the main act of the bombing happening, with injured and dead citizens, is captured and widely shared over the media. The videos and images of dilapidated persons circulating in media houses and across social media can strike more fear with a broader population. Video redaction software can be used to clean up these videos and graphics that might shock the conscience of the population and, most importantly, the children.

Footage from the traffic cameras put in different places in the cities is very beneficial, especially in preventing petty crimes, but sometimes they are also prone to abuses. Video redaction software can be used to avoid these abuses by public officers and criminals. For example, in 1997, a top-ranking police officer in Washington DC was caught using police databases to collect information about a gay club’s patrons. He sought to threaten customers who were married by looking up the license plate numbers of cars registered at the club and investigating the history of the vehicle owners. This is not only an abuse of office discretion and a gross violation of the bill of human rights, but it is also unethical and morally unacceptable in our society. The good news is that this can be avoidable, especially when the first handlers of such kind of data collected from traffic cameras subject it to video redaction before the recorded images are released to the media, police, or other agencies in the criminal justice system. The disclosure of video recordings for some purpose other than the improvement of the criminal justice system is not recommended.

Although there is consensus on the importance of surveillance in traffic management and in protecting American values, it is also agreeable that the use of these technologies can equally be detrimental to the same values that we hold so dear. A social consensus about how to use cameras is necessary. Fundamentally, we are a nation of laws and rights that have their origin in law. Although the Fourth Amendment to the US Constitution provides some safeguards against the invasion of privacy, there are currently many unclear guidelines to restrict invasions of privacy and to protect against misuse of CCTV systems. This gives responsibility to state and private agents to protect the data they collect from various traffic management systems.

In the area of audio recording, there have been well-defined laws regulating individuals’ audio recordings without their permission for a long time. This explains why most surveillance cameras are not fitted with voice recording microphones. The same needs to apply to visual recordings. This kind of regulation needs to be tempered with putting in place ruthless enforcement mechanisms to ensure compliance to protect the public from the dangers of misuse and abuse of such information.

Different legal commentators have emphasized, there is a dire need to come up with rules that determine a consistent public understanding of such issues as how video signals are registered, under what circumstances and for how long they are retained; what the requirements are for other government entities or the public to access stored footage; how the rules will be checked and enforced; and what penalties will apply to infringers. Although this has been a big challenge in protecting the privacy of the American citizens, now the efforts should be focused on technologies such as video redaction to do what the law may not have been able to cover over the years specifically.

Like any disruptive technology, it is crucial to balance the advantages of installing public video cameras against the costs and hazards involved. This kind of technology has the real and potential power to change the underlying experience of public outings in America. Video redaction software comes in as the only reliable tool that can be used to ensure safe usage and storage of the videos and images received from the surveillance systems used to monitor and manage traffic. With the availability and usage of video redaction by authorities, the civilians will be able to build more trust with the authorities as they realize a reduced intrusion of privacy.

As traffic trends continually evolve, it’s critical to use a management platform designed to adapt. The cities and organizations that will best adapt to this ever-changing landscape are those that choose to implement an operations platform that takes full advantage of new technologies to keep a step ahead of emerging traffic challenges.

The deployment of video surveillance systems in any public space should be in tandem with the privacy principles in public spaces. Video redaction comes in as a complimentary service or technology to ensure compliance with these kinds of principles and regulations. For instance, data collection and gathering should be done within the constraints of what is considered to be reasonably necessary to meet a legitimate objective. As such, this data should be subjected to checks and controls. Through video redaction, there is legitimacy over the data retained, and whatever part of the footage will be used and released to the public will be good for consumption. Since deployment and management of video surveillance cannot be restricted to few officers, the only way to tame rogue handlers of the data obtained from the video surveillance in traffic management should always be subjected to redaction.