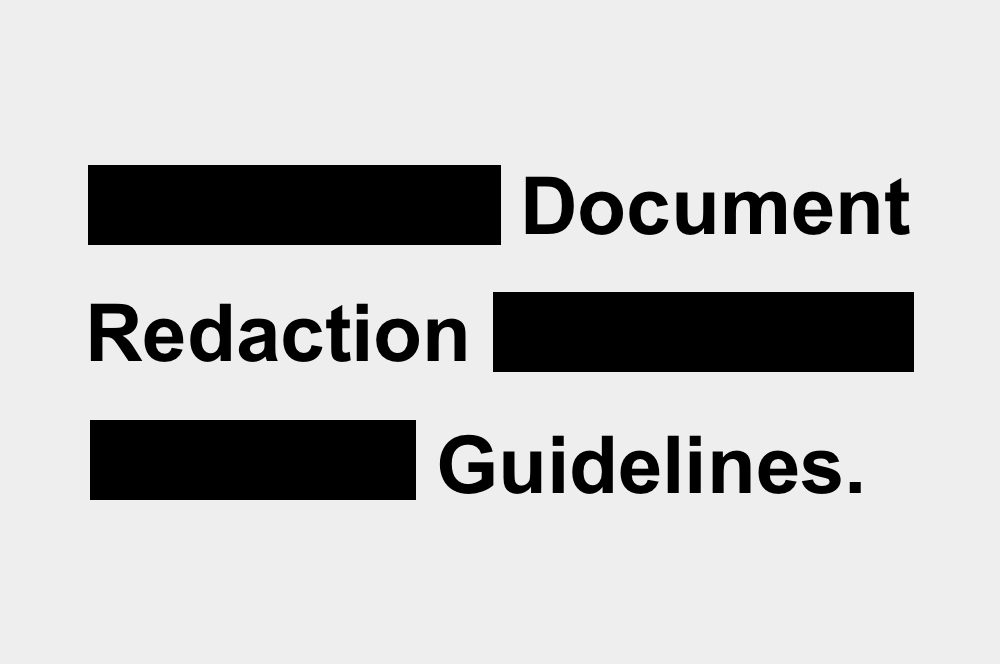 For a long time now, the redaction of electronic documents has been a topic of debate. Much of the debate centers on what can be redacted, what should be redacted, and how to accomplish a full-proof redaction so that redacted information cannot be compromised. Compromise of redaction is the larger issue by far. The ramifications of redacted information being compromised is dire, especially if the documents in question pertain to an on-going investigation, or provide intelligence concerning previously undetected crime. In years past, the public was not well informed on their access to documents of government agencies, but that has changed drastically. When considering these two factors, personnel charged with releasing documents have much greater scrutiny placed upon them since the turn of century.

The Beginning of Electronic Documents

As Microsoft Word proliferated into the modern workplace, the use of the Word formatted document became very common. The use of these documents dovetailed with another proliferation: email. And from that point forward, how we received documents forever changed. Scanning signed documents into a database, and then sending them to interested parties slowly became the norm. Soon after this, the idea of sending documents electronically to satisfy public records request became a topic. Some courts were against the idea, but without a lot of fighting, it became typical for document records to be furnished electronically, rather than being forced into expensive printing of the documents.

However, as the need for redaction came up, how to accomplish that with electronic documents became an issue. At the time, there really wasn’t a tool that could provide redaction, so as it goes, these documents would first be printed, with redaction efforts physically applied (white-out and black sharpie), re-scanned into the computer, and then sent off. This adds a lot of time to the process, but ensures that the work gets completed accurately, which is what matters most when conducting redaction efforts.

In 2005, the NSA derived a way of redacting documents electronically that involved using Microsoft Word, and Adobe PDF. There method involved taking a Word document, removing the Track Changes option from the document, and then replacing all words in need of redaction with a series of x letters. Once completed, you would then open a second Word document, and copy and paste the final result to the new document. The next step is to convert the new document to a PDF. In between each step, you’re supposed to check each phase of the redaction to ensure that no information in need of redaction got past the previous step. This was rather efficient, when considering the original method discussed, but there has to be a better way than handling the same document three times to accomplish the objective.

That’s where the latest addition to CaseGuard Studio comes into play. Rather than having to handle a document multiple times, we’ve taken the same principles of video redaction, where you work from a single document, and create a “child file,” where your redaction work is saved in real-time to a separate file, and then you burn the redaction work into that file. This means you handle two documents, one time, leaving the original document untouched, and creating a fully redacted document that can be disseminated to unlimited amounts of people, without having to revisit the document later, if it’s requested again.

We are very excited about our document redaction feature. It’s a first of its kind tool, and will make your public records mission much more manageable, and will leave you plenty of time to get many other tasks completed, still with time to spare.

How to Use the Watcher Feature in CaseGuard Studio

The Watcher feature within CaseGuard Studio is a tool that enables users of the software to automatically redact image, video, audio, pdf, and email files.

OCR Technology and its Various Applications

Optical character recognition or OCR for short is a widespread technology that is used to recognize text inside of a variety of different images such as scanned documents and photos.

How Can I Redact Personal Information From a PDF File?

Many businesses and organizations may come across instances in which they are required to redact sensitive information from PDF files.