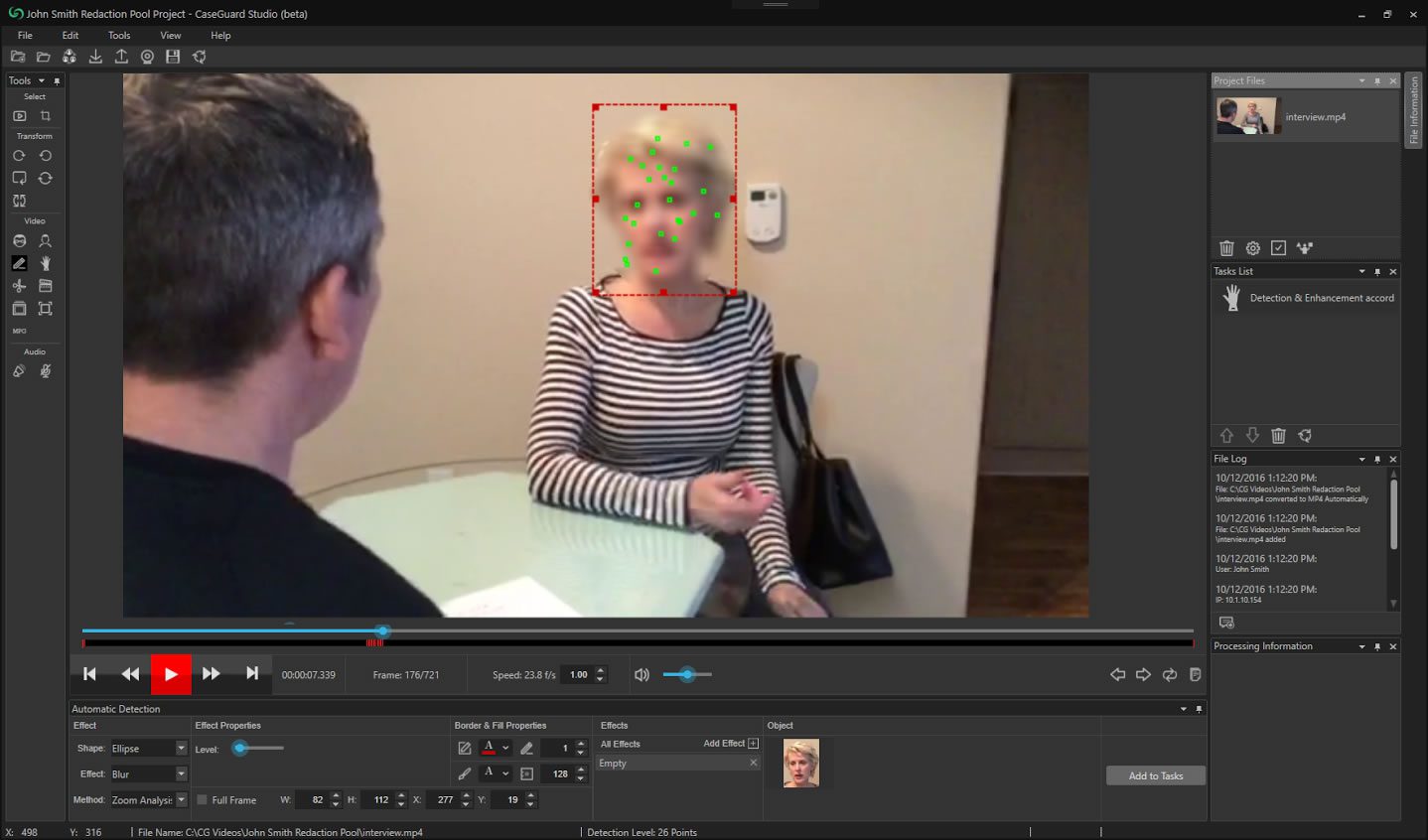 Video redaction and enhancement software has turned from a rare luxury, to a mandatory tool for all law enforcement agencies. From responding to public records requests, to protecting victims, witnesses, confidential informants, and most of all the innocent who happen to be at a scene, agencies can no longer afford not to be proactive on their own in responding to requests for records, including video, while ensuring that those records only provide what is permissible. And this trend, while it may slow, is not going to revert. This is the modern era, and government records are going to be requested by many people from here on out, including the media, big and small. But law enforcement agencies are not trained in video production, or editing. Sure, there some large agencies among us that have staff trained in these fields for specific purposes. By and large, agencies don’t have this talent available, nor do they have the money to send someone to film school. In all actuality, they shouldn’t have to. Here’s what video redaction and enhancement software should have at a minimum, to save you money, time, and most of all liability and penalties.

First, any software purchased for any function, should be compatible with your current system. That means that it can interact with other applications, your server files, etc. If it’s not capable of this, don’t buy it. It’s 2018, and the idea of proprietary function needs to be a thing of the past. Don’t encourage its existence.

Second, it should not be web-based. If the software doesn’t meet this standard don’t buy it. Web-based software involving video becomes cumbersome due to the use of video streaming, rather than direct playback from your server. Considering that many videos in need of video redaction and enhancement tend to be lengthy, and you can see quickly that streaming these videos, while constantly playing and stopping is going to lead to a problem. Software that is application based is the preferred method of operation. Playback is in real time, meaning you can start, stop, select a new starting point, and whatever else you can think of on the fly, without any effect on playback. And this brings us to our next point.

Third, playback and review of enhancements should be just intuitive as watching the video. If the software is only allowing you to look at increments of the video, rather than the whole video, then something is wrong with that software, it’s going to become a time consumer, and time is something your agency doesn’t have. We’ll discuss specific issues concerning time later in this article.

Fourth, your software should have a save function. This comes into play where your personnel have been working on multiple videos during their shift, perhaps they have a few that they just haven’t finished quite yet, but it’s time to go home. Too many times we’ve heard of software that doesn’t have this feature. It’s either they finish the project now, on overtime, or they go home and restart the entire process of redacting and enhancing that video tomorrow, for who knows how long. That’s plain unacceptable, and any software that doesn’t have a save function, allowing you to return to the point you’ve reached at a later date, is simply not software that should be in supply. Get rid of it, and get your money back.

Fifth, your software should be able to handle all video, audio, and photographic files. And this is probably an even bigger priority than everything else. If software designed for these purposes can’t handle a certain file type, then it’s going to be useless some of the time, and that’s something you can’t afford to pay for.

Your video redaction software should serve two purposes: video redaction and enhancement, of both audio and video. Within that software, there should be a plethora of tools that among other things, should have the capability to block out people and parts of people with relative ease, with several ways of doing so. Whether it’s their face, exposed skin, their whole person, you should be able to apply one effect, one time, and then watch as that effect does its job in redacting that person or their identifying features. Touch up work is to be expected, software can’t be perfect, but having to do this work frame by frame needs to be a thing of the past, and software that requires that much labor doesn’t have your agency’s bottom line in mind, only your checkbook. Your software should also be able to mark multiple people in a scene, even if it’s “busy,” in a way that key people are identifiable throughout the video, and easy for your personnel to be able to match people with the accompanying imagery if they come upon them in the future. And the way those people are marked in a video should have. For perspective, we’re discussing the minimum tools video redaction software should have available.

When it comes to audio interviews, your software should be able to mute and bleep out audio in real-time, so you listen, select where you need to remove audio, and then you move on. No one has time to spend hours figuring out points in an audio clip to censor. Having that capability is important, absolutely. And it serves a purpose in certain situations. But it shouldn’t be the go-to option for audio. Editing audio in most situations should be just as easy, and if not easier, than redacting video. Additional tools to control pitch and tone, which relate to distortion are important as well, for those times where you must hear what a person says, but also must protect their identity. If the software doesn’t offer that, then you shouldn’t waste your agency’s money on it.

Now we get to the truest measure of video redaction and enhancement software. What are the associated costs of time and money that your software creates? A general guideline is that it should take no more than two minutes of video redaction and enhancement activity to produce one minute of footage. If your software bogs you down for six hours to wade through a 30-minute video, it’s not worth the cost. You have to consider that when buying software, the lowest price is not always the cheapest solution. What you pay for upfront should be paying off in time costs (i.e. your agency’s money) over the duration of use.

Outsourcing such efforts can be even more costly. Contractors in this field charge $0.99 cents per second. If you look at the math on this, that’s $59.40 for one minute of video. Is your agency prepared to pay sixty bucks for every minute of video? How many public records requests are you fielding a month? How many requests of the court require you to redact or enhance video? How many media requests are you handling?

The truly cheapest way of dealing with the issue of redacting and enhancing video and audio is purchasing software that is responsive, intuitive, and doesn’t cost a lot in training, or time, to be an effective tool in your agency’s war-chest.

These are basic considerations, but considerations nonetheless. If the video redaction and enhancement software you’ve bought, or are planning to purchase do not meet these specifications, you’re wasting your agency’s money. What those software packages offer is something that over even a short period of time, will cost your agency heaps of labor in overtime costs, and the associated labor, as it takes numerous people to complete tasks, that if your software did meet at least these minimum specifications, your tasks could be boiled down to one or two people, without the need for overtime.

When it comes to the overall package, can your software do both video redaction and enhancement? If not, you should find software that does. While redacting is necessary, enhancement is too. Think of the cold cases your agency has, that could be re-examined with new tools that enhance the scene or objects, and then lead to a fresh perspective. If your software isn’t able to do this, you’ve got the wrong software.

Buying software can be an arduous process that most just want to end, but the cheapest option is not always the most practical. We hear it every week from agencies that chose one product, and three months later regretted it because of how much the costs on the back end rose. You should think less about the upfront costs and more about the long-term investment in your agency’s budget.

The True Cost of Failing to Redact Properly

To redact is to edit or prepare something for publishing. It sounds simple, but it is much more than putting black boxes over information or blurring a face. Redaction is not just removing the ability to read or view the data; it is the act of eliminating all traces that the information ever existed in the first place.In today’s post, we’ll explain what redaction is, when redaction is required by the law, when and how to redact, and how redaction benefits your organization.

Many businesses, law enforcement, schools, hospitals, and security systems handle video input from a variety of sources every day. In this piece, we’ll explain how poor quality video can be handled during the redaction process.

What Can an All-in-One Redaction System Do for You?

What can organizations responsible for maintaining, releasing, and redacting information do to work more productively and avoid the improper release or exposure of information? In today’s CaseGuard article, we’ll cover how using an all-in-one redaction system can help organizations work smart, avoid lawsuits, and prevent reputational harm.

AI-powered video redaction software essentially develop the same processes police departments have deployed over the years. With these systems in place, officers can be assured that sensitive information is kept safe while fostering accountability by easily releasing information and preserving the privacy of people.