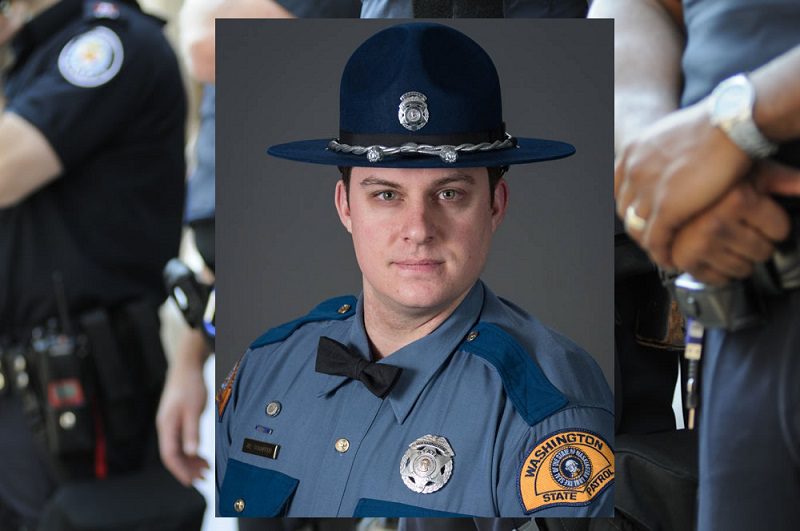 On Tuesday afternoon, March 24, 2020, Trooper Justin R. Schaffer was intentionally struck and killed by a suspect’s vehicle. He was 28 years old and had served with the Washington State Police for seven years.

The incident began on Monday when a 39-year-old man had stolen a bottle of lighter fluid from a local convenience store. The clerk pursued the thief into the parking lot with her camera with intentions of photographing his license plate for police. The man then pulled out a stun gun and threatened the clerk and another customer in the parking lot. Both the clerk and the customer backed away, and the dangerous man jumped into his vehicle. As he began to leave, he accelerated his truck towards the clerk, narrowly missing her.

The local sheriff’s department reviewed the store surveillance and reported the man’s personalized license plate to all law enforcement agencies in the area. He was considered dangerous. All departments and patrol officers in the area were on the watch for this truck and license plate as of Monday afternoon.

The following day, Tuesday afternoon, a Thurston County Sheriff’s Deputy spotted the vehicle. The truck was on I-5 near exit 95. When the officer tried to pull over the truck, a chase ensued. There was a high-speed chase heading southbound along I-5 heading into Lewis County.

Called into action, State Trooper Schaffer was in the area and left his vehicle to deploy stop sticks across the I-5 interstate. He was near mile marker 79 in Chehalis. The suspect spotted the trooper and used his truck as a weapon hitting the trooper at full speed. He continued at high speeds for several miles, where he eventually crashed into a light pole.

The man refused to surrender, and a standoff with SWAT closed the highway. Eventually, SWAT fired teargas into his vehicle, forcing him to come out.

Officer Schaffer was severely injured at the scene. He was taken to Providence Medical Center, where paramedics were arranging an airlift to another hospital in Seattle. He died before transportation could arrive.

Vehicle dangers are the second leading cause of line-of-duty deaths for law enforcement officers. There can be a variety of contributing factors for accidents such as speed, distractions, and even lack of sleep. Some accidents involve officers being struck by vehicles. While trying to do their police work, such as attend to drivers on the side of the road. These types of accidents can be reduced with awareness and drivers obeying state traffic regulations that require drivers to move over to another lane or slow down when passing an officer in their duties.

Another way in which vehicles can be dangerous for police is when a suspect uses their vehicle as a weapon. In the case of Trooper Schaffer, a fleeing suspect intentionally used his truck as a weapon, striking the officer who was attempting to stop him. He had previously tried to use his vehicle as a weapon when he stole an item from the convenience store. Statistics show that Americans lose officers every year due to criminals who use their vehicles as a weapon. In 2018, four officers lost their lives when a suspect ran them down with their automobiles. No matter what weapon is used, a car, a gun, assaulting an officer for doing their job is the wrong choice. Those who choose to harm others, officers or civilians, with weapons of any kind will face appropriate prosecution.

Washington State Patrol officers are called Troopers and have jurisdiction over the entire state of Washington, with the exceptions of federal properties and Indian Nation territories. The reputation of their officers precedes them. By the early 1960s, the Washington State Police was known as an elite law enforcement agency. At that time, they were receiving over 400 applicants a year for less than 25 openings at any given time. To wear the badge of a Washington State Patrol, sometimes known as WASP, comes with distinct honor.

Trooper Schaffer is survived by his wife, parents, and brother, along with his K9 officer and best friend, Frankie. His family, along with his fellow family in blue, are all mourning this tragic loss. The entire state of Washington is stunned by the tragedy and supports the family in their time of grief. Governor Jay Inslee had this to say about the incident. “Trudi and I send our deepest condolences to the friends, family, and colleagues of Justin Schaffer, who died in the line of duty today. The Schaffer family, including Justin’s father Glenn, who is the police chief in Chehalis, has made tremendous sacrifices for our state. I am grateful for the difficult and crucial work that law enforcement does every day to protect us and keep our communities safe. Justin was a young man who served and protected our state with honor for the past seven years. I know all Washingtonians join us in mourning this tragic loss.”

His death certainly takes away the future years that Trooper Schaffer would have given to serve this community and state. The entire area is coming together to support his family. Fellow officers are also profoundly affected by his passing.