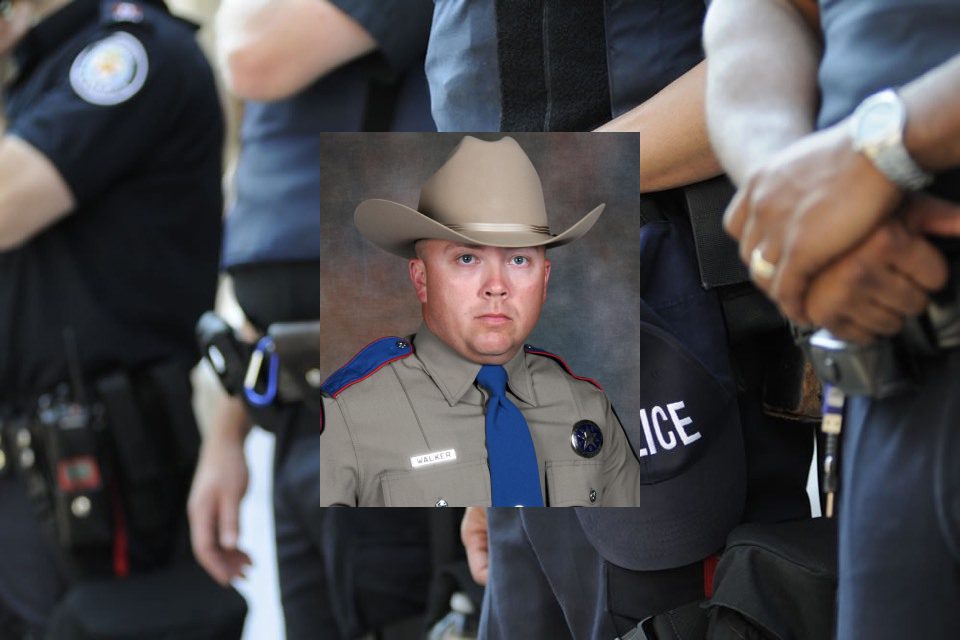 On Wednesday, March 31, 2021, Texas authorities were devastated to face the public with the announcement that another Texas officer had been lost. Over the last year, due to COVID19 and other causes, Texas has lost more officers than any other state in the US. Trooper Chad Walker, age 38, was shot five days earlier during an assist with a disabled vehicle. He had been a member of the Texas Department of Public Safety as a Highway Patrol Trooper for over six years.

Trooper Walker was known to have a good heart and like to help people. It would be the last thing he would try to do, help someone. Walker pulled to the side of the road to assist what he believed to be a disabled vehicle. He was near Mexia, Texas.

Walker had been traveling SW on HWY FM2838. When he was near Highway 84, he observed a vehicle that appeared disabled on the curb. It was 7:45 pm. Walker had been responding to a call of a disabled vehicle in the area. The car was parked on the shoulder of the road. Walker, concerned that someone needed help, pulled in behind the vehicle.

There on the side of the road in Limestone County, near Mexia, Texas, Walker performed his last act of kindness. Before he could put his car into park, the stranded motorist fired his weapon at Trooper Walker, hitting him in the head and abdomen.

According to the Regional Director of the State Department of Public Safety Todd Snyder, the gunman “emerged from the driver’s seat of the disabled vehicle armed with a handgun and fired multiple rounds at Trooper Walker through the patrol unit’s windshield.”

The Texas Department of Public Safety or TDS posted the following announcement on their Twitter. “After extensive life-saving efforts conducted by the Baylor Scott & White Health medical professionals, it has been determined that Trooper Chad Walker no longer displays signs of viable brain activity, and he remains on life-support until he can share the gift of life as an organ donor. This final sacrifice embodies Trooper Walker’s actions throughout his life and service as a Texas Highway Patrol Trooper. The Walker family is grateful for the continued support and prayers as they remain at Chad’s side.”

The Texas Department of Public Safety (DPS) is the state agency responsible for overseeing law enforcement and vehicle registration. DPS is managed by the state Public Safety Commission.

In certain situations that necessitate quick oversight, the Governor of Texas can take command of the agency. This would be in the event of a natural disaster, riot, or insurrection.

The Commission consists of five members appointed by the Governor and must be confirmed by the state. These individuals serve the state, without pay, for six-year staggered terms. This helps to maintain some bipartisanship within its members. The agency is considered a civilian police agency and was formed in 1935.

The Texas Highway Patrol (THP) is the largest state-level law enforcement agency in Texas. The primary duties of the THP are to enforce Texas traffic laws and monitor commercial vehicle registrations. The Troopers do have full police authority to enforce all US and Texas laws.

Patrol Troopers also extend security services to the Capitol Complex in Austin, Texas. The Highway Motor Patrol was initiated in 1929. This was the first statewide law enforcement agency created in over one hundred years when the Texas Rangers were formed in 1823.

Losing a family member can be traumatic and life-changing. It doesn’t matter the reason why. Somehow it can be more challenging to understand when it was so unnecessary, such as in the case of an assault or crime.

Trooper Chad Walker leaves behind his wife, his 15-year-old son, 7-year-old twin daughters, and a new two-month-old daughter. This young, vibrant family will have so many challenges ahead. It will take the entire community, extended family, and ongoing friendships with fellow law enforcement officers to ensure these children reach their full potential.

DPS Director Steven McCraw asked for the community to remember the tough time facing the Walker family. “Texas Highway Patrol Trooper Chad Walker was committed to protecting the people of Texas. His sacrifice will never be forgotten, and we ask that you keep his family, friends, and colleagues in your prayers during the difficult days ahead.”

Texas Governor Greg Abbot was troubled by the news of the murdered officer. “Trooper Walker’s horrific murder is a solemn reminder of the dangers law enforcement officers face every day to keep our communities safe.”

A livestock sale was happening in Limestone County, Texas, at the time of Trooper Walker’s death. The Walker family had rabbits up for sale. As news spread of the tragic accident, the Walker family’s rabbits were the last item brought to auction. The ranchers, farmers, and local 4-H participants then rallied to raise more than $58,000 for the family.

Ty deCordova, president of the fair association, commented on the loss. “He was an awesome father, an awesome friend, an awesome husband. Just always happy. He always had that little smile on his face, you know, when he came up to you. He’s good people, and he dedicated his life to civil service and just loved to help folks. If you ever needed him, you could call him. He’d help anybody. He never met a stranger.”