In Memory of Trooper Caleb Starr 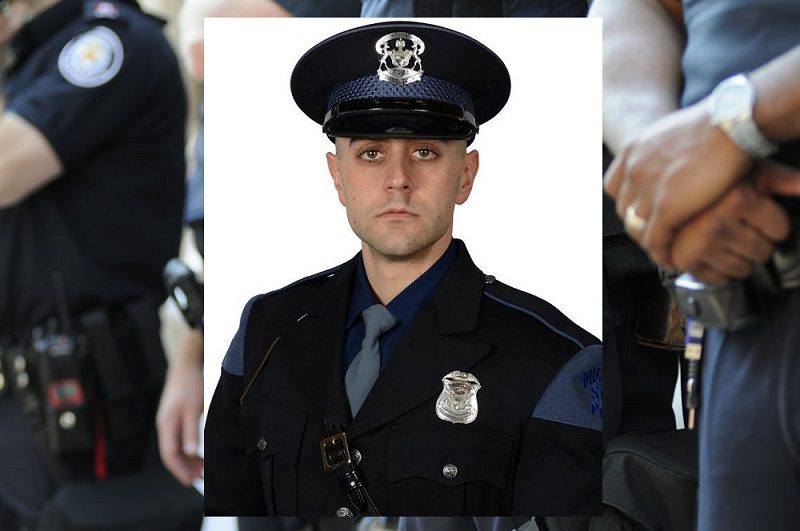 Trooper Caleb Starr, 33, died on Friday, July 31, after being treated for three weeks at Spectrum Butterworth Hospital in Grand Rapids, MI. Trooper Starr had been struck head-on by a drunk driver three weeks ago on July 10, in Boston Township, where he had to be extricated from his cruiser and then immediately flown to the hospital for treatment. Trooper Caleb Starr leaves behind his wife, Rachael, and two very young daughters, ages 5 and 2. Starr was assigned to the Lakeview Post when he joined the State Police in September 2018 as a member of the 135th Trooper Recruit School and was a consistently dedicated public servant.

Karin Manes was one of the hundreds who came out to honor Trooper Caleb Starr as he was driven through her community on his way to his final resting place. She wanted to show her support to his family. She personally knew Trooper Starr, since he was a young man. Manes had been his second-grade teacher and had maintained a close relationship with his family. “His life-long dream was to be a police officer.”

Bryan Oleksyk, the spokesperson for the Michigan State Police, praised Trooper Starr for his life spent serving and helping his community. “He embodied what a trooper should be. He was not only a trooper but a son, husband, and public servant.”

Lee Chaney stood along the route with her family members. She came out to support Trooper Starr, who had been one of the patients at McLaren Hospital she felt grateful to help. She had been a nurse at the hospital who attempted with “It’s pretty amazing but tragic. There is a camaraderie among nurses and first responders when the fallen goes down. I pray for the family and hope he rests in peace.”

Hundreds of police officers came to lead the procession for Trooper Starr. He was a well-respected officer throughout the area. Residents have gathered from all over the community to join the officers in paying their last respects to Starr.

Jim Couchenour, Starr’s uncle, commented about his nephew and the loss to the family. “He was one of those kinds of guys that was looking for a way to be involved. He wanted to make a difference in life. You can’t replace Caleb. It’s a hole that will be there forever. How do you overcome that? One step at a time, one day at a time.”

After distracted driving, drunk driving is the number one cause of most vehicle accidents in America and the deadliest. Alcohol has been proven to cause the chemistry in the brain to become altered, and it curbs common sense, fear, and motor skills. If those three are working behind a vehicle that can travel at 100 miles per hour (or more in some models), the driver is a pilot of a 2-ton assault weapon. Nobody is immune to drinking and driving. The old trope “only one drink won’t hurt” has proven that even buzzed driving is drunk driving.

Starr served the community of Ionia. Ionia is the County Seat, and as of the 2010 census, the population was 11,394 and is 5.48 square miles. The county was named after the historic area of Greece, Ionia. It was organized in 1837 after having been defined in 1831 by an act of the Territorial Legislature. The climate can be warm in the spring and fall, hot and humid in the summer, and severely cold in the winter and is prone to heavy fog and flooding from the Grand River. Two major employers in Ionia are the Ionia Correctional Facility and the Michigan Reformatory, which are both located west of downtown.

Trooper Caleb Starr was a powerful influence on fellow officers to be better than they were. He gave his adult life over force for domestic security during World War One. The Michigan State Police has proudly served the citizens of Michigan since April 19, 1917, and has grown from 300 men to a full-service police agency of more than 3,000 members. Today, the MSP has a 21st-century staff of professionals, using modern-day technology and training that ensure the safety of the Michigan citizens. What used to be a tiny 300-man outfit has expanded to become one of the leading US police agencies. The seeds of commitment, pride, and service that were planted in 1917 have strong roots in 2020 and still play a vital function in the department.

Trooper Caleb Starr’s funeral was held in Mason, Michigan, which is his hometown. State police officers from all over Michigan, community members, family, and friends all gathered to celebrate the life of Trooper Starr. He had used his experience to reach out and help all members of his community.

Michigan State Police Lt. Brian Oleksyk talked about the tragedy of losing an officer within the community. “This is a tragic thing. It’s sad. This is the Michigan State Police way because we were family to him; this is our way of honoring him and saying goodbye to him.”