In Memory of Sheriff Kirk A. Coker 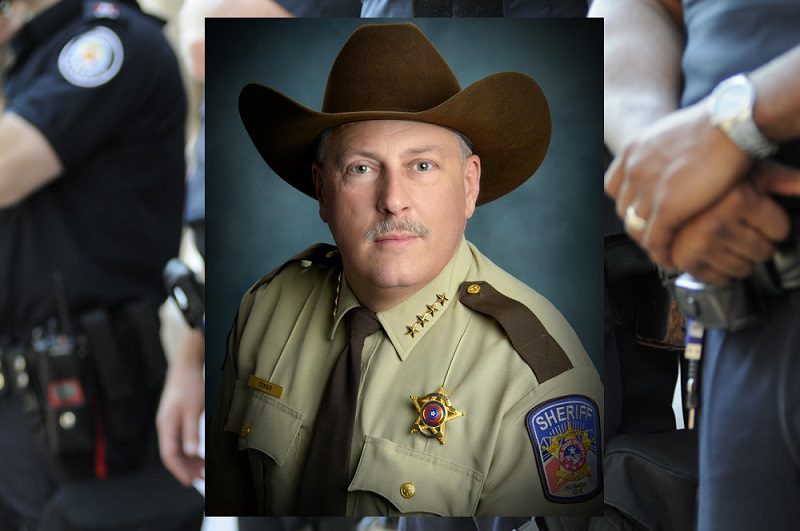 On Sunday, March 29, 2020, the community of Hutchinson County, Texas, experienced the loss of one of their prominent public leaders, Sheriff Kirk A. Coker. A 35-year veteran in law enforcement, he began his day by taking a call nearby to a scene of an unattended death. He went directly from his home to the investigation.

While conducting the inquiry into the death of the victim, Sheriff Coker received multiple calls regarding mass gatherings occurring within the county violating the state-wide COVID19 social-distancing order, putting the lives of members of his entire community at stake. After releasing the death investigation, he was driving east on State Highway 136, just a mile outside of the town of Fritch.

Sheriff Coker was driving his patrol vehicle, a 2017 Chevrolet Tahoe. He suddenly drifted off the highway, through a barbed-wire fence, across a field and ending when his patrol vehicle hit a tree. He has suffered a heart attack on his way to control the scene of the mass gathering, causing his truck to run off the road. He was pronounced dead at the scene of the accident, which was found two hours later by other deputies. He had minimal damage to the vehicle and was wearing his seatbelt, which gave officers reason to believe that medical issues were at the cause of the crash.

The streets are not the only dangerous place for law enforcement officers. Danger can lurk inside their bodies from complications from prolonged stress and shift work that being an officer entails. Over five years, the Buffalo Cardio-Metabolic Occupational Police Stress (BCOPS) study conducted extensive research on the impact of stress on the health of 464 members of the Buffalo Police Department. What the study found was despite physical fitness requirements, the daily onslaught law enforcement officers’ experience of psychological stressors creates an increased risk for long-term health effects. The negative health impacts include cardiovascular disease, obesity, suicide, sleeplessness, and cancer.

Many times, researchers find disparities in health issues are usually related to socioeconomic or ethnic factors; however, this time, they discovered that occupation could negatively impact your health. Law enforcement officers experience daily stressors on the job that include high demands, long hours, shift work, psychological and physical exposure to real dangers, exposure to human misery, and even deaths. These experiences can lead to not only psychological traumas, such as PTSD, but actual physical damage with increased risk of cardiovascular disease, and other chronic health issues.

John D. Volanti, who is a research associate professor in UB’s Department of Social and Preventive Medicine in the School of Public Health and Health Professions, is a leading figure in the BCOPS study. His studies have demonstrated that compared to average citizens, officers over age 40 had a higher risk of experiencing a coronary event. Even more critical to long term health effects, it found that 72% of female officers and 43% of male officers exceed recommended averages for blood cholesterol levels. Overall, officers as an occupational group have above standard pulse rates and higher than average diastolic blood pressures.

Under continual stress, officers have a constant raised level of cortisol throughout the body. Volanti stated, “When cortisol becomes dysregulated due to chronic stress, it opens a person to diseases. The body becomes physiologically unbalanced, organs are attacked, and the immune system is compromised as well. It’s unfortunate, but that’s what stress does to us.” High cortisol releases create an allostatic load on the body, which can, in turn, set officers up for risk of heart attacks.

Today, coronavirus or COVID19 is raising the stress levels of officers across the country. Now there is an invisible threat against their lives. The health threat also impacts the lives of all the community members that officers commit to protecting each day of their careers. With these added stressors, what Sheriff Coker had to deal with on that fateful Sunday was additionally stressful. He had to address the needs of a scene where someone had died. While solving one situation, he also had to answer many calls where churches in the area were defying stay-at-home orders. Failure of church leaders was putting all the lives in the community at risk. While no one can say for sure, these types of situational stressors spike the allostatic load on the body, as the BCOPS study demonstrated.

Sheriff Kirk A. Coker has served his community in law enforcement for over 35 years. He had spent the last 12 ½ years with the Hutchinson County Sheriff’s Office. Elected Sheriff in 2016, he was 57 years old. County Judge, Cindy Irwin, remembered the Sheriff in this light: “Sheriff Coker loved law enforcement. He had a passion for trying to make this a better place. He was about rehabbing people, and he just had a passion for that.”

The Hutchinson County Sheriff’s Office is unique in many ways. They are responsible for the public safety of all the citizens in Hutchinson County. It also includes more ghost towns than any other county in the panhandle area of Texas. The department consists of three divisions, which include Patrol, Jail, and Administration. Sheriff Coker was the backbone of the department, taking responsibility for keeping the entire office running smoothly and protecting all the people in the area. Efren Munoz was sworn in temporarily as acting Sheriff until the county held special elections for a new Sheriff in July.

Grief has overcome the large family of Sheriff Kirk A. Coker. He left behind his wife, three sons, three daughters, grandchildren, parents, brothers, and many more in his large loving family. Though officers came from all around to escort Sheriff Coker in the funeral procession, the funeral itself was private and for family only. The funeral’s restriction was due to the current health crisis. During the procession, citizens lined the streets to show how much he was loved and respected, many holding signs, to demonstrate support for his family.

The family has asked that in place of flowers or cards that donations be made in the Sheriff’s name contribute to his memory with a gift to Snack Pak 4 Kids in Hutchinson County. You can find more about this program and provide to kids in need here: Snak Pak 4 Kids.