In Memory of Sergeant Scott Johnston 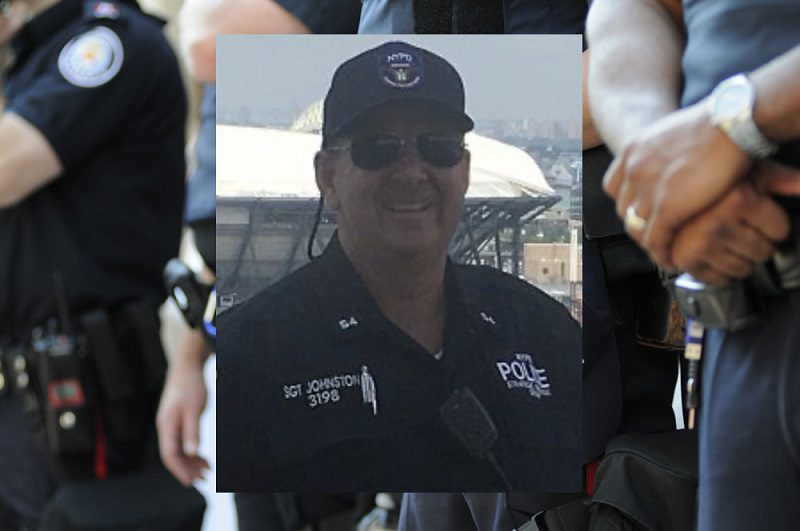 On December 19, 2019, Sergeant Scott Johnston lost his battle with a 9/11 related cancer. He had battled the illness for over two years. Sergeant Johnston had served with the New York City Police Department for over 23 years. On the morning of September 11, 2001, he answered the call to help save victims of the terrorist attack at the World Trade Center.

Sergeant Scott Johnston was a true American hero. When others were fleeing from the impact of the first plane hitting the twin towers, Sergeant Johnston was running towards the danger. He put his own life on the line in order to attempt to save others who were fearing for their safety. He was among the many first responders of police, fire fighters, and EMS personnel who rushed to the burning twin towers in order to save lives. The actions of these brave individuals, including those of Sergeant Scott Johnston, helped to save over 25,000 lives.

Johnston was born in Brooklyn and moved to Levittown, NY, as a young boy. He stayed in the same home he grew up in, raising his family with his wife. He and his wife, Kristin, were parents to seven beautiful daughters. Three of these girls were triplets. He was not only a hero to the city of New York and to the town of Levittown where he had previously worked as a firefighter, but he was a real-life hero to eight amazing ladies.

All of his daughters are either in college or graduate school working on their doctorates. They spoke of how tough it was to watch their father go through this illness. They have worked hard to make their father proud of them. Olivia, 24, is attending New York Institute of Technology and studying for her doctorate. Kaeley is in South Carolina attending The Citadel. Hannah attends Queens College where she is in graduate school. The University of Albany is the school of choice for daughter Amelia.

The triplets are 18 years of age. Their names are Molly, Rebecca, and Natalie. Rebecca is studying for a degree at Quinnipiac University, while both Molly and Natalie are together as students at Adelphi University. Their father was proud of all seven of his beautiful and smart daughters who worked diligently to live up to the example he had set for them. Their mother, Kristen, is equally proud of them. Losing their hero, their father, has been a tremendous loss.

As the first responders were attempting to save lives, the South Tower of the World Trade Center collapsed due to fire. The police, fire fighters, and EMS workers continued to attempt to save lives in the adjoining tower, which collapsed just a short time later. On that tragic day, seventy-one law enforcement officers, and 343 members of the New York City Fire Departments were killed. Due to this tragedy, 2,800 civilians were also killed in the attack on that day.

During the terrorist attacks, a third hijacked plane crashed killing all the passengers on board including one law enforcement officer. The passengers on that plane were brave and attempted to fight back for control of the plane. A fourth hijacked plane crashed into the Pentagon, in Arlington, Virginia. This incident took the lives of nearly 200 military and civilian personnel.

President George W. Bush awarded all of the first responders, posthumously the Medal of Valor on September 9th, 2005 for their acts of bravery. The air quality from the tower collapse presented an additional danger for all the first responders, law enforcement, and fire fighters who continued to work at the site to attempt to locate victims. More than 204 deaths have occurred from illnesses that have presented as a result of the contamination in the New York City Fire Department. Over 250 deaths have additionally occurred since 9/11 within the New York City Police Department from contamination related illnesses.

The numbers now show that more first responders have died since that tragic day, than occurred in the terrorist attack itself. Hundreds and thousands of first responders came to the site of the twin towers to dig through the rubble looking for the remains of victims to return them to their families. These individuals, who put their lives on the line, are now facing illnesses that can be traced back to the event. The police and fire departments of New York City, are devastated by the loss of so many of their friends and loved ones. They lost so many on the day of the attack, and yet eighteen years later, they are still losing the people they love. Their one message as a result of this incident is this: “Never Forget.”

Sergeant Scott Johnston made Levittown, New York his home. He loved his community and worked to protect his friends, family and neighbors by contributing as a local firefighter with the Levittown Fire Department. He later joined the New York City Police Department. Levittown is a suburb or census designated place (CDP) located on Long Island. The name Levittown comes from its builder, and a firm Levitt & Sons, Inc. The area was founded by Abraham Levitt on August 2, 1929. As a builder, he designed the community as an area of housing and a planned community for returning veterans as they came home from World War II. The architects of the community were Levitt’s sons, William and Alfred, and it was the first mass-produced suburb in the United States. Originally the area was known as Island Trees, but later the name was changed to give credit to its founder.

Sergeant Johnston grew up in this neighborhood with his parents. He stayed and never left the home he grew up in. He loved the area and spent his entire life giving back to the community around him and to people of New York.

The New York City Police Department has a rich history as it originated as part of the New York City Government and replaced the inadequate night watch system that had worked until the mid-1800’s. The city modeled its new department similar to that in London, and it officially began in 1845. The need for the new department was due to the increase in population in the city which also came with an increase in crime rates and poverty. In 1857 the Municipal Police was replaced by the Metropolitan Police and other departments in the area were included and worked closely.

One of the first major incidents in which the department came to show its resolve was during the Astor Place Riot of 1849. The department stood tall against the trouble in the area and put the riot under quick control. Originally, the policemen in the department were only required to wear a badge, but a uniform became standard issue and a requirement for officers in 1854.

Sergeant Scott Johnston showed that he valued his childhood home in Levittown. He served with the New York City Police Department for 23 years while wearing his badge, number 3198, proudly. His attitude toward his community and hometown, and the pride he took in serving the department showed that he clearly appreciated the history behind the badge.

Sergeant Scott Johnston left behind many daughters, who are all attending college. This pursuit and the medical bills left behind can be difficult for many families. The large debt that these women are now facing led to the community pitching in and starting a GoFundMe page for the ladies to continue having their success in school and in life. If you would like to donate, you can find their page at the Scott Johnston Fundraiser GoFundMe Page.