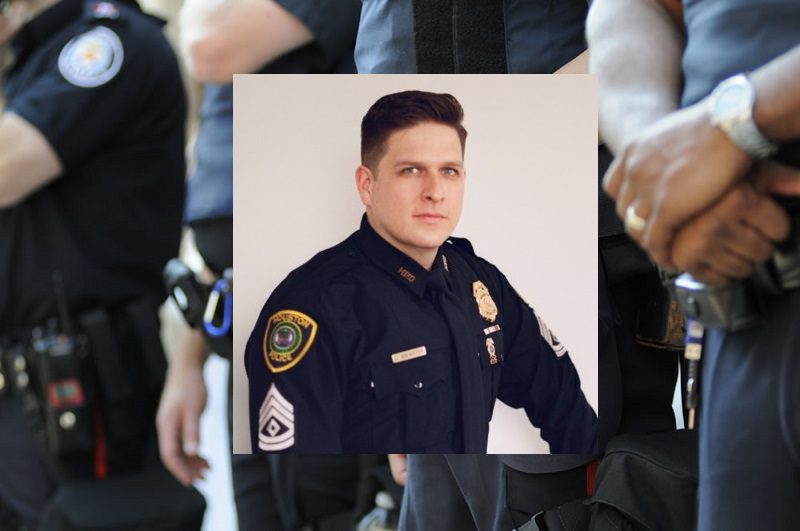 On Saturday, December 7, 2019, at approximately 6:00pm, Sergeant Christopher Charles Lewis Brewster was shot and killed when he responded to a 911 call about domestic violence. He died saving someone else’s life.

A woman called 911, reporting a domestic violence assault and that her boyfriend was armed with two handguns. Officers quickly arrived at the scene only to find that both had left. They began to canvas the area looking to see if they could find them. Sergeant Brewster spotted the couple walking along the 7400 block of Avenue L.

As Brewster approached the couple, the suspect fired on him as he attempted to open the door to his squad car. The bullet hit him right in the chest. Despite his fatal injuries, Sergeant Brewster was able to call in a clear description of the suspect to other officers nearby. Officer rushed to his side; he was transported to Hermann Memorial Hospital where he died from his injuries.

Following a foot pursuit, the suspect was caught and finally arrested. He is now facing capital murder charges and may get up to life in prison as a result of his actions. Sergeant Brewster was a well-liked officer who had served with the Houston Police Department for over 9 years.

The most dangerous incidents that police can face during the course of their duties are traffic stops and domestic violence calls. It is the inability to know who or what situation you are walking into. While one traffic stop could be a simple ticket and a complying individual, the next situation could become extremely volatile. Domestic violence calls are generally considered the most dangerous of the two, because the abuser has already gotten into the mindset that they are the ‘authority’ and can be abusive and controlling of other individuals. The other reason that they are more dangerous is that they are likely to be in their homes and have access to weapons, such as firearms, close by.

Domestic violence is out of control in the United States, which means that police face this type of danger on a regular basis. According to the National Coalition Against Domestic Violence the rates of incidents in the U.S. are approximately 20 people that are abused by their partner every minute. Police intervene to save lives and also to help families. More than 5 million children per year are exposed to domestic violence and more often than not, approximately 30% of children, become additional targets of assault by the abuser in the household.

Police are trained to be on their toes when handling this type of call. To be more aware of their surroundings, to do an additional drive-by and listen to observe additional details of what is going on with the family. Their training teaches them to be both physically and mentally prepared for anything, to call for backup, and be ready should violence escalate.

Sergeant Brewster was born and raised in Houston. He grew up wanting to become a law enforcement officer. It was a natural progression for him to find his place with the Houston Police Department. Sergeant Brewster was 32 years of age and had worked for the department for about 9 years. He was well-liked by his family in blue as well as members of the community.

He was known to be kind, gentle, and have many hobbies including teaching others how to compost and have a worm garden. His friendly manner often took people off guard, making them feel more at ease, and he had a great love for Christmas music. He had been thrilled to graduate from the police academy in November 2010 and join the Houston Police Department as a patrolman. He later worked on the gang division and then later, the major crimes division.

A friend and former employer, Theo Tsekouras, described Brewster’s appearance as somewhat intimidating, as he was large and had many tattoos. He said that what he found after getting to know him was that he was really just a goof. Tsekouras described him as, “Lighthearted and always had a smile on his face and was fun to be around.”

Officer G. Dane Garcia spoke of what it was like to be Brewster’s partner in law enforcement. He was described as honest, kind, yet firm. That you always knew what he thought, good or bad. He was a straight- shooter. Brewster was described as an officer who consistently put his life on the line as they both responded to some of the most dangerous situations in the city. He was brave and always there for others.

He had recently married his wife Bethany in 2014. He leaves behind his wife, his parents, Cynthia and Lewis Brewster, three sisters, and nieces and nephews. The family is filled with such grief they have been unable to talk about the loss. Due to his deep love for the holiday season, many Christmas trees decorated the funeral as his family, the city, and his ‘Blue Family’ all said their goodbyes. He will be missed by the entire community of Houston.