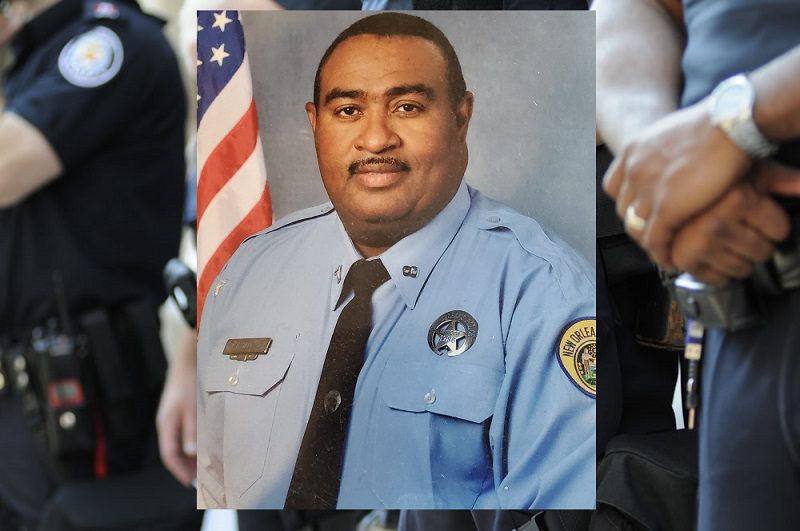 A New Orleans Police Officer died from coronavirus and its complications on Thursday, April 30, 2020. Senior Police Officer Mark Hall, Sr., age 53, had struggled with the illness since his diagnosis on April 3. He had served the community and the NOPD for 35 years and was currently assigned to the 8th District. This assignment mainly covered the area known as the French Quarter.

Hall spent his life as a servant to New Orleans. His family described him as loving, smiling, and always dancing. He was known to be the kind of person that would lend a hand whenever possible. His wife, Sonja Hall, has been overwhelmed by the outpouring of support from people all over the community. “It’s unbelievable the number of people who have so many good things to say; things me and my kids didn’t even know that he did.”

His daughter, Jasmine, is overcome with grief, calling her dad her “nerdy partner in crime.”

Coronavirus doesn’t stop for a badge or a uniform. It doesn’t stop to ask if you’ve been a good person, or if you’re a father. The virus does not care where you live or the color of your skin. If you want to honor first responders and others who have already lost their lives to this illness, then the best thing you can do is be vigilant, wash your hands frequently, wear a mask, and stay indoors.

Just days before Police Officer Mark Hall was found positive with coronavirus, information regarding the virus reaching a sudden peak had hit the news. On March 29, the number of reported infections in the Orleans Parish jumped from 100 cases to 1,350 with 73 fatalities.

Many blamed the Mardi Gras for beginning the wave of outbreaks in the state of Louisiana. While some may have found themselves infected directly from going to the big party, many disease experts are not so sure that is the likely cause of the outbreak. The reason for the experts coming to a different conclusion is that upon talking with residents, they found most leave during Mardi Gras. Many long-time residents leave the city to get away from the party insanity. What the experts fear happened is that these residents went out of the area, many with trips out of state, and became infected, bringing the virus back with them.

Regardless of how the virus spread to or through the city, it shows how this disease does not recognize borders, ethnic groups, or individual neighborhoods. No matter where you live on earth, right now, you are at risk.

The New Orleans Police Department (NOPD) covers the entire area of Orleans Parish. The department is divided into five bureaus, and the city itself is divided into eight districts. Regardless of where the crime is committed, there is one central lockup. The Eighth District was where Officer Hall had dedicated his entire career.

Policing in the city began at its 1718 founding by French colonists, handled by military forces. As New Orleans changed hands, the military government rule also changed. It was during the administration of Baron Francisco Luis Héctor de Carondelet that history publicly records the formation of an official New Orleans Police Department in 1796. What the account read was, “Crime had reached such proportions by the mid-1790s that a full-time city police force was required.”

Officer Mark Hall Sr. is survived by his wife, Sonya, and his two children Jasmine and Mark. He has a large family; many will be mourning the loss of Hall, including siblings, aunts, uncles, extended family, and friends. His family also included many brothers and sisters in blue. Among those who will miss Officer Hall, includes his best friend in the world, a poodle named Peppa.