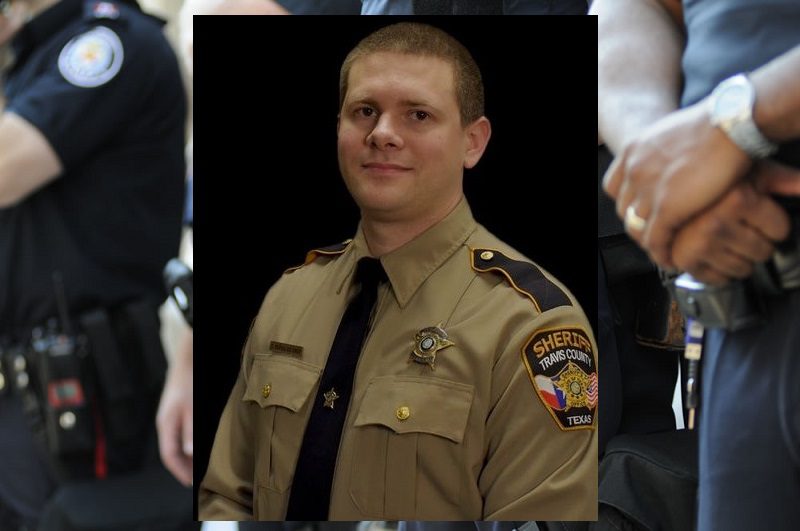 In a tragic fatal accident, Senior Deputy Christopher Korzilius lost his life during his early morning commute to work on Wednesday, March 18, 2020. The accident occurred in the 7700 block of RM2244 at approximately 6:50 am.

It was a two-vehicle crash. Deputy Korzilius had been driving Eastbound in his unmarked patrol car, a Ford Escape. He was struck by a two-door Infinity when it crossed over into his lane. The resulting collision caused the patrol vehicle that Deputy Korzilius was in to then be launched from the force of the impact over the guardrail and down a steep embankment. The injured officer was pinned inside his vehicle, which eventually landed on its roof. The impact and fall from the crash were immediately fatal.

The driver of the second vehicle was also injured. The driver’s name has not been released, but it is known that they were immediately transported to St. David’s South Austin Medical Center with critical but non-life-threatening injuries. As per Texas policy, the investigation of the crash is handled by the Texas Department of Public Safety.

While the exact cause of what led up to this crash is still being investigated, we can learn more about the dangers that automobiles have in the careers and lives of law enforcement officers. Law enforcement is a dangerous job. While gun violence is the leading cause of line of duty deaths, automobile-related deaths consistently run a close second. The two reasons are so close that in 2018 the trend for gun violence had gone down, and automobile deaths had gone up, just enough that these causes tied each other in the number of line-of-duty deaths.

The reasons can be varied. It can merely be an accident, as we all face every day on the roads. Studies show that law enforcement officers spend a great deal of time in their patrol vehicles. These same studies have also demonstrated several contributing factors such as police equipment distractions, such as the radio and computers in their patrol units. The adrenaline rush, as their focus becomes narrowed towards racing to get to a scene in time to save someone’s life or stop a criminal. With that rush to help, also comes speed. Driving at excessive speeds can cause even experienced and well-trained drivers to lose control of their vehicles.

There are also dangers from other vehicles that strike officers who are on or near the side of the road handling their law enforcement duties. Drivers should regard officer safety as paramount as their own, or their own families’. Most states have enacted legislation on changing lanes or slowing down, following these guidelines, and using common sense when passing a working officer can help reduce the number of accidents. While we don’t ever want an officer to lose their life, there are also intentional vehicle incidents. Criminal suspects fleeing, and striking an officer does happen. The studies of the different causes for vehicle-related deaths are to help find ways to protect officers better, develop training and safety protocols and educate the public on how to help reduce the number of fatalities for officers in the line of duty.

The Travis County Sheriff’s Office has a long history in Texas. They engage the community through their website, which includes a lengthy history of their department and the area that they patrol.

Travis County was created on January 25, 1840. Its name was in honor of Alamo commander William Barrett Travis. While the county was later divided into several smaller counties, the name stayed with the original county seat. The first sheriff was appointed March 14, 1840, and won a landslide victory of six votes. Over the history of the department, 32 men and one woman have held the office as Sheriff.

The Travis County Sheriff’s Office has a value system based on their initials, TCSO. Trust – as an honor to be earned; Community – in the strength of having a relationship for the common good; Security – providing safety as a fundamental quality of life; and Openness – leaving ideas, dreams, and passions as a foundation for all community members to build upon.

The Travis County Sheriff’s Office lost a valuable member of their team. Senior Deputy Christopher Korzilius had been given many awards during the four years he served with their department. At 32 years of age, the loss of the many more years he would have given to their team and the people in the area, is a more significant loss, due to the significant impact he had made.

In July of 2018, Deputy Korzilius and five others were awarded the very high honor of receiving the Commendation bar. It was to honor their bravery for going in on a call where people’s lives were at stake, and shots were being fired. He showed great promise from the first days of his employment with the department, having earned the employee of the quarter just seven months after he began serving. He also won other awards, had many letters of recommendation, and was named Victim Services Deputy of the Year. The loss of such a hero is a loss to all those he had impacted and would have impacted in the future as a deputy.

Deputy Korzilius is survived by his parents, and many other extended family members, friends, neighbors, and ‘Blue family.’ All are mourning the loss of someone who had given them all so much in his short time. Texas goes big when it comes to honoring their fallen law enforcement officers, but this time there will be a delay. There is no word on how long funeral arrangements and services will be delayed due to the current crisis of the coronavirus. While everyone wants to attend, social distancing and other viral concerns may make this a difficult funeral arrangement to prepare. He is the eighth member of the Travis County Sheriff’s office to lose his life in the line of duty.