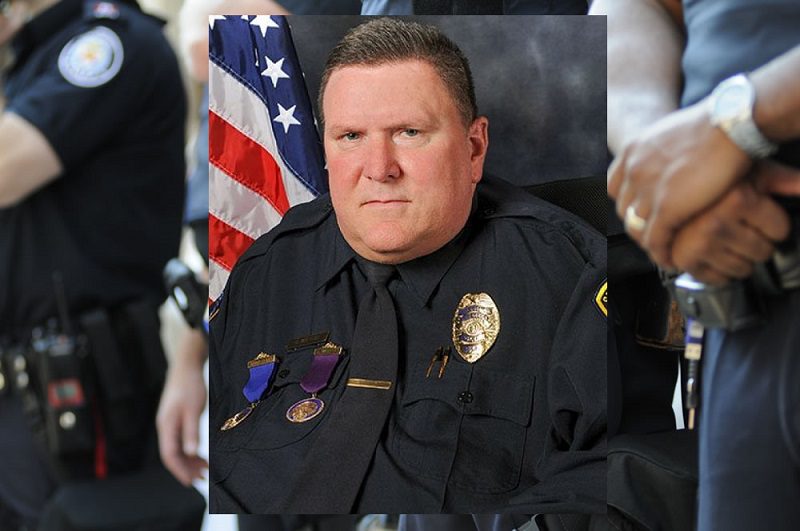 On April 23, 2020, a retired San Diego Police officer, Dan Walters, passed away from injuries he sustained on the job in 2003. Walters, age 53, had fought on from these severe life-threatening and paralyzing injuries for seventeen years.

San Diego Police Officer Dan Walters was on his second career path in 2003. On November 12 of that year, he and his partner received a call to back up another officer who had stopped to investigate a vehicle parked in the travel lanes of the road with a man standing nearby. When the first officer on the scene began to approach the suspect, the man quickly pulled out a gun, aiming it at the officer, which caused him to seek cover quickly.

The confrontation was occurring on 43rd Street near the Gamma Street intersection. Police Officer Dan Walters and his partner, having approached the suspect, immediately confronted the man. The gunman then attacked Officer Walters. He placed his weapon on the officer’s neck and fired. The shot caused Walters to fall backward into the roadway. Walters’ partner immediately shot and killed the gunman.

After falling into the roadway traffic, Officer Walters was then struck by an oncoming vehicle. The injuries crushed two cervical vertebrae leaving Walters paralyzed. Officer Dan Walters is being remembered for his brave actions when faced with seeing one of his fellow officers in trouble.

Walters gave an interesting interview recounting some of the terrifying moments when he spoke with the San Diego Tribune in a 2013 interview.

He spoke of the event as he remembered it. “As we rolled up, I saw this officer on his hands and knees, desperately crawling for cover with this frightened look on his face and with his gun drawn. I immediately thought, ‘Oh, s–t!’ and jumped out of the car.”

He was unaware at the time that the suspect had been involved in a domestic violence incident and had already shot at his colleague, the bullet ricocheting off of his handcuffs. Walters ran to the officer that was in trouble, as he did this, the suspect closed in on him, brandishing his weapon.

According to Walters’ interview, the gunman came directly at him and pointed the gun in his face. He stopped about an arm’s length away from him. Walter continued to describe what happened next. “At that moment, I decided I wasn’t going to let him just stand there and shoot me in the face, so I lunged for the gun, missed, then grabbed him, attempting to get him to the ground and wait for help. He put the gun to the back of my neck and fired.”

The first thoughts Walters had when he hit the ground was that he was going to die. He was then struck by oncoming traffic, and he recalled that when the ambulance came to assist and move him, they found him with his legs sticking out from under the car.

It is truly a miracle that he survived to be a voice of inspiration to many in the community. He fought his injuries like with the true heroism he displayed that day for seventeen long years. The original gunshot injury caused complications, which eventually ended his life.

Police officers face danger in their chosen paths. Many organizations, including the Federal Bureau of Investigations and the National Institute for Occupational Safety and Health, as well as many others, keep statistics on the causes of injuries and line-of-duty deaths for law enforcement officers. The one thing they can agree on is that the dangers are many and the solutions are few.

Shootings always seem to top the list as dangers for officers. Shootings are followed by a close second with vehicle-related accidents. When it comes to the types of 911 calls, the most dangerous type of calls that an officer can respond to are domestic violence calls. Traffic stops can often follow this. It is simply amazing that in the case of Police Officer Dan Walters, on that fateful day, he managed to find himself going through all of these scenarios at once. Even so, he was brave, and he did what he could to help another officer who was in trouble, putting his own life at risk. No one could ask more from a brother.

Walters’ first career choice wasn’t to be a police officer. It was to play professional baseball. He, like every red-blooded American young man, dreamed of being on the infield of America’s great ballparks. He actually made that dream come true. The Houston Astros drafted him in 1984. After showing much success as a right-handed catcher, he eventually went on to play for the San Francisco Padres in the 1992 and 1993 seasons.

It was a spinal injury that ended his baseball career. He played for 84 professional games; he had 64 hits during his 273 at-bats. His batting average was a .234

With so much more to give, he began his police career in 1998. He served for five years with the San Diego Police Department. This police department has a long history in the San Diego area. Law enforcement began in the community beginning in 1850 when a marshal single-handedly took care of all duties. These were tough times in California, and by 1852, no brave souls were willing to take the position, so law enforcement was disbanded.

Years later, in 1885, the city marshal position restarted. Within a few short years, in 1889, along with the city’s official new charter, the San Diego Police Department officially originated. They have grown from that one city marshal to the current growth of nearly 1834 sworn officers. These officers have the responsibility to serve and protect more than 1.4 million residents.

The San Diego Police Department released a statement regarding the passing of former Officer Dan Walters. “Dan grew up locally, played professional baseball here in San Diego, and proudly served his city as a police officer. He will forever be remembered by the members of this department.”

Officers escorted Dan Walters from his home; his flag-draped body over the gurney, as other officers, including Chief David Nisleit, stood shoulder to shoulder, at attention in his driveway. Motorcycle patrol officers, as well as other patrol vehicles, then escorted Walters to the funeral home.

The San Diego Padres made a post on their Facebook page, which included many photographs of Walters over the years. They commented on their sympathies to the fans and family of Walters regarding this loss. “We are deeply saddened to hear of the passing of former Padres catcher and San Diego Police Department officer, Dan Walters. Our thoughts are with Dan’s family.”

Dr. Steve Albrecht, a physician, was also a friend to Dan Walters. He spoke briefly about knowing him from his early days with the police department, as well as his friend through his many years since the injuries. “I loved him dearly. He came on the PD with two steel rods in his spine from his baseball injury. He chose to start a tough job that causes most people to retire. It’s so sad and ironic that he made his living with his body, as a pro ballplayer and a cop, to then get paralyzed. He lived through so many serious infections and had to take so many medications. I know that he is no longer in pain.”