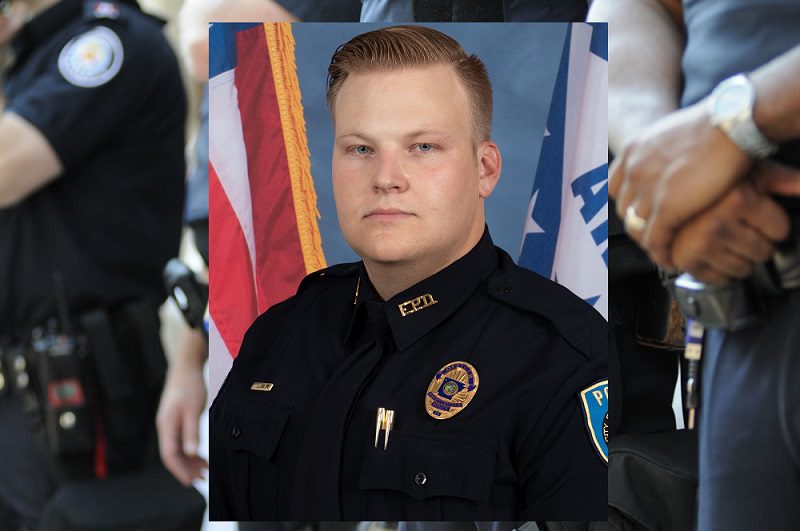 It was just weeks before Christmas, on December 7, 2019, when 35-year-old Police Officer Stephen Paul Carr was parked in his patrol car outside of his precinct station house. He was taking a few minutes to relax while waiting on his partner, who was inside the building. He did not see the figure approaching his vehicle from behind.

Cameras caught it all. It was around 9:41 pm, and a dark figure of a man approached the patrol car from behind. Without warning, the man pulled a gun and began firing. He shot Officer Carr in the head at point-blank range ten times before turning to flee. Inside the station, other officers heard the gunfire and came out with their weapons drawn.

Medics attempted to rescue Officer Carr; however, he was pronounced dead on the scene. Other officers pursued the suspect into an alleyway where he turned and fired his weapon at them. In an exchange of gunfire, the pursuing officers shot and killed the suspect who had taken the life of their fellow officer and friend, known as the ‘gentle giant.’

In 2019, 22 officers were feloniously killed by gun violence in the southern part of the United States. Alabama, Arkansas, and Mississippi are among the top three states for gun violence against law enforcement officers. Attacks on law enforcement are on the rise nationwide. Some groups are promoting ‘anti-police’ rhetoric, much like some groups promote hate or racism.

The problem is not just in the South; it is nationwide. The shooting of Officer Carr follows just weeks after a massive demonstration in New York City. Thousands of protesters marched through the streets on November 1, 2019. They were upset overstepped patrols as a response to two controversial incidents between police and residents in the subway.

The protesters were angry and protesting against aggressive policing practices. At the same time, the very thing they were opposing ‘aggression’ came through during their protest. There were many arrests for assaults on police officers, and there were even several patrol cars that were graffitied. While peaceful demonstrations or even community discussions can be a healthy way to create change, when aggression is used as a weapon of protest, there will inevitably be consequences.

Brooklyn Borough President Eric Adams made a valid point, that “we don’t resolve aggression and disorder with more aggression and disorder.” That isn’t called protesting; in fact, that is called a declaration of war. This type of action initiates responses in individuals who may not be thinking clearly, have mental health issues, and in some cases, may also be armed. While we don’t know precisely why the suspect chose to cause harm to Officer Carr, it was discovered that he belonged to several anti-police social media groups online.

Police Officer Stephen Paul Carr served for over 2 ½ years with the Fayetteville Police Department. He was assigned to the Bicycle Patrol Unit. He also patrolled the Dickson Street Entertainment District. Well known and well-liked, he was known by patrons of the district to be calm, fair, and caring about everyone he met.

Officer Carr served with approximately 170 other officers and civilians who work to keep the city of Fayetteville, Arkansas safe and secure. After graduating from Southwest Baptist University, where he attended on a football scholarship, it was his life-long dream to become a police officer.

The assault against Officer Carr brought people together from across the state to pay their respects to the late officer. There were officers from across the country that came to participate in the procession leading from the funeral home. Arkansas Governor Asa Hutchinson and Attorney General Leslie Rutledge were among the speakers. Community members, young and old, lined the streets to help mourn the loss of their local hero. Flags were ordered lowered to half-staff. The city of Fayetteville has posted a memorial page that includes photos and videos posted on their city web page for all to learn more about the officer that brought them all together, and they lost all too soon.