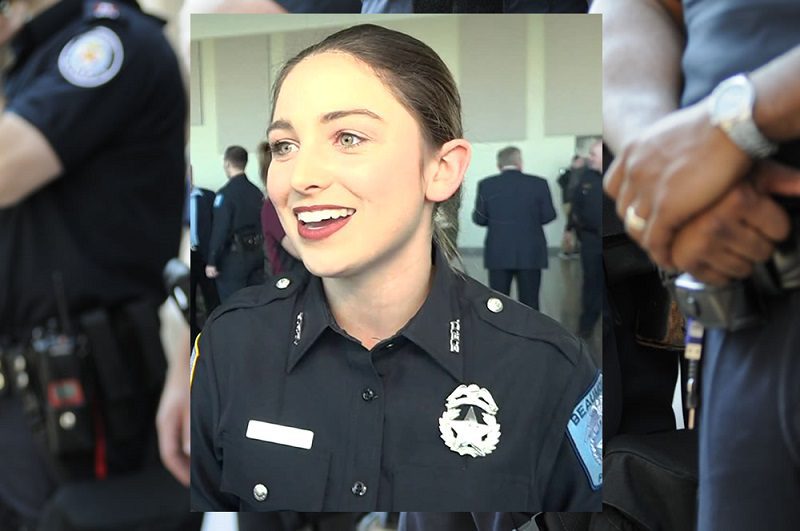 Texas officials were sad to announce the loss of a 23-year-old officer and another officer injured in a head-on collision on Sunday, August 9, 2020. Police Officer Sheena Doe Yarbrough died early Sunday morning when her vehicle was hit head-on by a driver traveling in the wrong direction. Officer Sheena had a long career to look forward to, as she had started with the department only two years ago.

Police Officer Yarbrough-Powell and her partner were struck when they were traveling on Cardinal Drive around 2:30 am. The driver of the other vehicle was operating while intoxicated and arrested at the scene.

Charlie Wilkison, the executive director of CLEAT or Combined Law Enforcement Associations of Texas, shared his grief and condolences to the community. “All of us at CLEAT offer our sincere condolences to family/colleagues of Beaumont Police Officer Sheena Yarbrough Powell. Officer Powell was 23 years old at BPD for two years assigned to the 4th Watch Patrol. Her unit was struck in a head-on collision w/DWI wrong-way driver.”

Police Chief James Singletary wrote a post on Facebook about the impact of the loss on the department and community. “It’s a sad day for The Beaumont Police Department and the community that our Officers proudly serve.”

Police Chief Singletary gave an update on the injured partner. He informed the media that he had received surgery and is now recovering at home. “He has a long road to recovery ahead of him, but we will be with him every step of the way.”

Most understand the dangers of police or other law enforcement when they battle crime to keep a community safe. Many miss out on the detail that traffic accidents and police chases cause as many deaths as violent crime. Many agencies track the statistics of line-of-duty deaths to understand the problem. These studies are geared to finding solutions or ways to reduce injury or death among officers.

The National Law Enforcement Officers Memorial Fund (NLEOMF) is one organization that studies the causes of line-of-duty deaths. According to their data, vehicle accidents have been the leading cause of death for officers in the line of duty for nearly two decades.

The FBI also conducts these studies, and their data for the line of duty deaths among officers make it clear that there are ways to reduce the death rate. During the last ten years, 1068 officers have been killed in the line of duty. Of the officers who died during this time, 330 officers were killed by handguns, while vehicle-related accidents killed 577. The officer killed was driving in 70% of these deaths. It is through studies of these accidents that departments are being taught many ways to reduce accidents. Creating safety rules for the department to follow, such as always wearing a seatbelt will save lives.

Chief Singletary gave his thanks to the many departments that came forward to help with the crash investigation. “I would like to say thank you to the State Troopers from the Texas Department of Public Safety for responding and leading the investigation of the crash. I would also like to thank the Jefferson County Sheriff’s Office and Lamar P.D. for stepping in and answering our calls for service while most of our Officers were on the scene of the crash. Also, I want to ask our community to not only keep Sheena’s family and the police department in your prayers but Beaumont EMS and Fire Department. Police, Fire, and EMS go hand-in-hand. We are all first responders, and our paths cross multiple times throughout our respective shifts. So, this loss is hard for them too. We have already started to feel the outpouring of support from the community, and it means more than you know.”

Police Officer Sheena Doe Yarbrough-Powell gave her life to Beaumont, Texas, and its residents. She had served as a police officer for approximately two years. At age 23, Officer Yarbrough-Powell had just begun her career as an officer and had so much more to give to the community of Beaumont.

Beaumont, Texas, was hit heavily during the 2017 Hurricane Harvey. The department has 260 sworn officers, along with nearly 70 administrative employees. Many of these civilian workers man the 911 Emergency call center. Due to the department’s size, the people who serve the community through the Beaumont Police Department are much like family.

At age 23, Police Officer Sheena Doe Yarborough-Powell was beginning her career as an officer. She was a valued member of the community and a resource of help, kindness, and service that should have been for many years to come. Now gone, the city not only lost an officer but a valuable resource.

Her husband survives officer Yarborough-Powell. In her hometown of Lumberton, the wife of a local police officer held a memorial walk at City Park. Her husband and dozens of local police officers ran a mile together for Officer Yarborough-Powell the night after she had passed. The community loved her in life and wanted to show her family and law enforcement that they are all loved.

Tyler Powell and his wife, Officer Sheena, had run together in the Houston Marathon in January. He cannot fathom that he will never see her again. Her absence now leaves a hole in his heart and all those in the community that loved her.