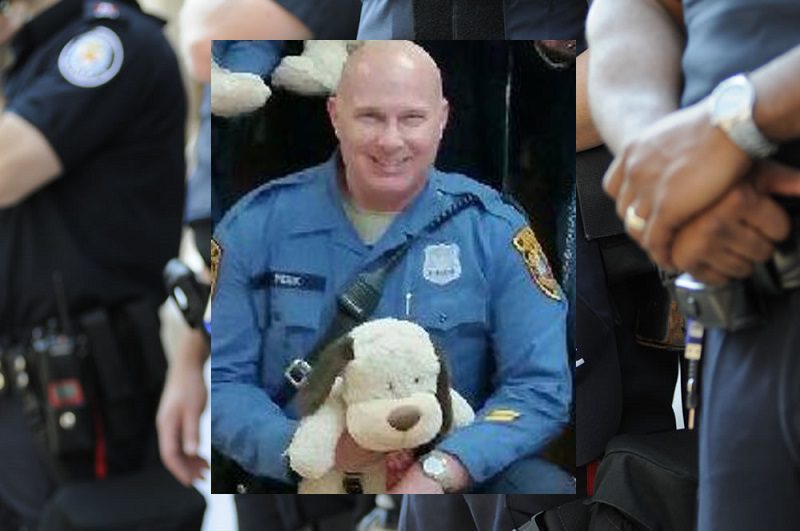 New Jersey authorities announced the loss of one of their valuable officers on Sunday, September 6, 2020, after a life-saving rescue event. Police Officer Sean Peek, age 49, risked his life by jumping into the Cohansey River near the Washington Street Bridge in the dead of night around 1:30 am to rescue a woman who had been committing a string of criminal activities.

Officer Sean Peek and other Bridgeton, New Jersey officers, responded to a Bridgeton Fire Department EMT satellite station call. The station is located at 15 Mayer Aitkin Drive. An ambulance was hit by an unknown object when pulling away from the station. A review of surveillance footage shows that a woman had been observed breaking into and damaging an EMT ambulance.

Upon arrival, Officer Peek noticed the woman running into the nearby woods and jumped into the river. Despite the risk to his own life and the darkness of night, he jumped in the water in an attempt to save her life. The woman, however, swam safely to the opposite shore. Peek became immediately distressed by his own equipment’s weight, and other officers had to rescue him from the river, also risking their own lives.

Bridgeton Police Chief Michael Gaimari said this about the incident in a brief statement with the press. “Sean made a decision as would any officer and entered the water in an attempt to pull the person from the running waters no matter what the circumstances were.”

The woman was immediately taken into custody, and charges are pending, including burglarizing city property, vandalism, and property destruction. It was also determined that the 29-year-old woman had burglarized several other buildings nearby. So far, it has been determined that she has caused more than $1000 in damages from breaking out windows in several buildings.

Officer Peek was treated at a nearby hospital and released. Sadly, he later succumbed to his death, from the events of the evening. His family members found him unresponsive early the following morning and called for emergency services. An investigation of the results of his early release and the exact cause of his death is pending.

Officer Peek had devoted more than 15 years of his life to serving his community, neighbors, and family by working for the Bridgeton Police Department. In the end, he gave them his life.

The Bridgeton Police Department or BPD has approximately 65 sworn police officers. They work together with community members to provide a safe and stable environment for families to live and grow together. The department depends on its community to help them find ways to come together to enforce the law and be better officers for the community. The department believes that “without the interaction and involvement with the citizens, our actions wouldn’t be as successful as they are now.”

His wife and daughter survive police Officer Sean Peek. He also had many friends, neighbors, extended family, and co-workers who will share in the unexpected grief from the loss of such a valued member and hero of the community.

Police Chief Gaimari shares his condolences with the family. “Sean was a fine officer and a friend to all and always acted in an exemplary fashion when representing the department and the City of Bridgeton. He will be sorely missed, and our hearts collectively go out to his wife, Megan, and their eight-year-old daughter, Kate.”

Bridgeton Police Department released the following statement, which was shared over multiple social media accounts. “End of Watch: September 6, 2020. Police Officer Sean Peek died several hours after a life-saving incident while on-duty. Officer Peek jumped into a river to pull a suspect out of the water, and it was difficult to make it back to shore with all of his equipment. Officer Peek was treated at a local hospital and released. He was found unresponsive several hours later. Officer Peek is the third officer fatality in the state of New Jersey in 2020.”