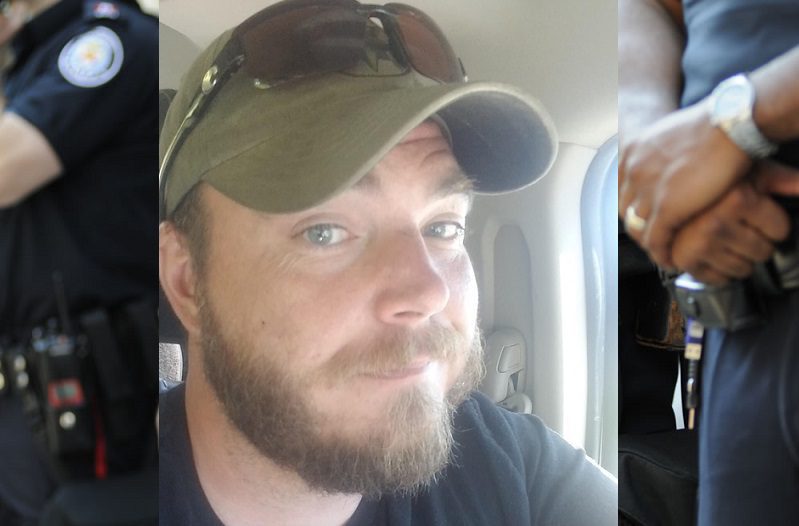 Tragic and Early End to an Officer

Alexander Police Department Officer Scott Hutton, 36, was shot and killed at the beginning of his shift at 7:10 pm on June 3, 2020. Officer Hutton had gone to pick up a patrol car from fellow Officer Calvin Salyers’ home. He was accidentally shot and killed when he arrived. He is survived by his wife of 5 years: Brittany (Vaughn) Hutton of Bryant; his father Herman Hutton and mother Carolyn Sue (Harvey) Hutton; one sister-in-Law; Megan Vaughn of Bryant; one brother: Shane Hutton of Dermott, AR; niece, Niki Honea and husband, Mike and daughter Luna; nephew, Christopher Hutton; and a host of friends that he considered family.

According to Arkansas authorities, Police Officer Salyers allegedly told co-workers that he’d “shoot through his door if protesters arrived on his front step” sometime after the death of George Floyd in Minneapolis on May 25. Most of the nation was highly sensitive during those first few days. Police Officers were not excluded from being on high alert.

Due to the social unrest occurring nationwide and much of the anger directed towards police, Officer Salyers held his gun as he looked through his door’s peephole when he heard a knock. Salyers said he saw a dark figure with a gun. He switched the gun from his right hand to his left hand, and as he opened the door, the gun fired. The discharged round struck Officer Hutton, fatally wounding him. Salyers and his girlfriend called for medical assistance.

Saline County Sheriff’s Deputies were sent to Evergreen’s 1500 block in Alexander about 7:12 pm. When they arrived at the scene, they found Hutton wounded by a gunshot to the chest and lying outside the residence. Life-saving measures were administered to Hutton by an Alexander police officer. Officer Hutton was transported to a Little Rock hospital where physicians pronounced his death.

He Was A Hero – Even To Complete Strangers

On June 11, 1983, in Greenville, MS, Herman Hutton and Carolyn Sue (Harvey) Hutton welcomed their new son, Scott Anderson Hutton, into the world. He served two tours in the United States Army National Guard, and shortly after being medically retired, he achieved his dream of becoming a police officer. Sadly, just eight days before his 37th birthday, Herman and Carolyn were planning their beloved son’s funeral.

John Richards, a friend of the family and fellow mud hole enthusiast, expressed his heartfelt sympathies on a GoFundMe page when he wrote;

“The Richards Family is thinking and praying for you during this time. Scott was a great person, and we will miss driving through the mud holes and hearing his stories. Scott is someone that would do something for anyone; we hope this makes a small difference and know that he will be missed.”

One doesn’t need to read any further than the message Amy Ross left for Officer Scott Hutton in the Tribute Archive on June 6, 2020, to know the type of person Scott was. What Scott did for Amy is not a common occurrence of man; it is a hero’s actions. “I met Scott one time, and he left a huge impression on me. I cannot even grasp this as real right now. To me, he was a superhero. The following is a post I made on February 27, 2019:

“So my adventure for the day lands me meeting a true superhero in my book! I picked up D from school, and we go to get her supper before church. We are sitting at the red light at 425, and all of a sudden, smoke starts pouring out of my car. I did what my daddy taught me and cranked up the heater. There was so much smoke I was beginning to wonder if my car was on fire.

I literally was about to run the red light because it was taking forever. There was a truck beside me and nothing coming as the light turned green. I pulled in at Atwood’s and shut the car off, made D get out, and popped the hood. I am on the phone with Bull telling him, but y’all the truck that was beside me at the light pulls in to Atwoods. This guy gets out, says, “Turn your car off,” opens the hood, and immediately starts checking out my car, reaches for the phone, and tells Bull what he thinks is wrong and asked how far away he was.

Bull is working late on a job. This guy then starts taking parts off my car and says I’ll be back. He goes all over to get parts and comes back and makes a piece to fix my car!! Then goes and buys water to put in it. About three other people stopped and graciously offered to help me or check on me! Y’all this guy was my hero today!! I had to force him to take money. He tried to throw it back in my car and drive off.’

So Scott Hutton, you sir, were such a blessing, and I am thankful to you from the bottom of my heart! If you know him tell him, he is one amazing guy, and I am forever grateful!!”

The department says this is a heartbreaking time. “It’s weighing very heavy with the department right now,” said Detective Jessica Burnett with the Alexander Police Department. “I’m very close to both the officers involved. We’re all family here. It’s like losing a blood family member. It’s not easy.” “We’re all friends outside of work. We’re pretty much family. We know each other’s friends, family. We’re all very close-knit here.”

A neighbor, who didn’t want to be identified said, “At first it was calm. We heard a gunshot. We didn’t really know what was going on because you just hear guns or real loud noises. Next thing you know, there were cops, ambulances firetrucks lined up and down the road.” The investigation began not long after that.

Salyers told investigators his firearm then accidentally went off as he transferred the weapon from one hand to the other as he reached for the door handle. The fatal shooting occurred just days after Salyers told investigators he would “shoot through the door” if any protesters showed up at his home in the aftermath of George Floyd’s police custody death on May 25 in Minneapolis.

“All I saw was a gun; it was an accidental discharge,” Salyers said during a 911 call.

A training sergeant reprimanded Salyers for the comment, warning that such conduct would be “reckless and negligent” since officers need to identify a person as a threat first before shooting.

Any officer can get additional firearm training if needed, spokeswoman Sgt. Jessica Burnett told the newspaper. “Pretty much any extra training that the officers want, they’re able to go to. We don’t turn down for any training.”

Officer Salyers was put on paid administrative leave. The state police opened and continued an investigation and, upon being completed, presented to the prosecuting attorney of jurisdiction, all evidence to determine whether any criminal charge should be filed or if the shooting was accidental.

Investigators found contact residue around the bullet hole in Salyers’ door, suggesting his weapon was pressed against it as he fired, according to Jacks’ account. Officer Calvin Salyers was later charged with manslaughter, a class C felony, in the shooting of fellow Officer Scott Hutton on June 3, 2020. Salyers, who had served in Alexander since 2017, was released from jail Wednesday after posting a $15,000 bond.