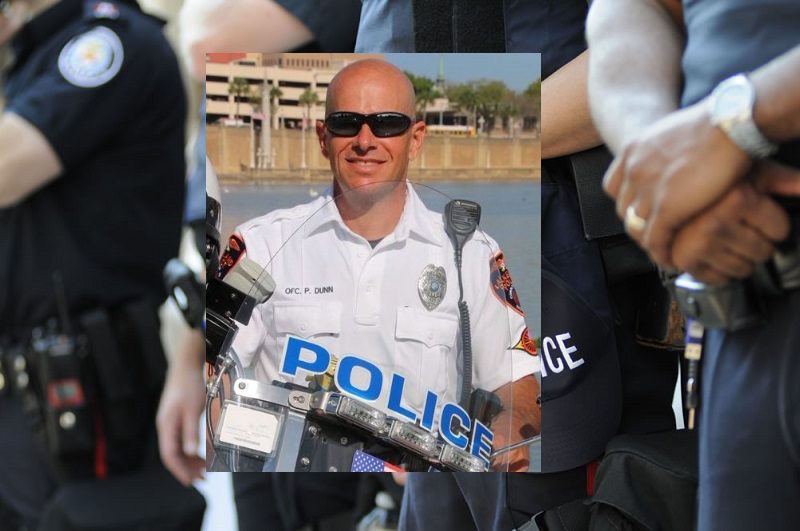 On January 9, 2020, early in the morning, the city of Lakeland suffered a tragic loss when police officer Paul Dunn of the Lakeland Police Department crashed his department motorcycle on his way to work. The exact cause of the crash is unknown; however, he was quickly discovered by two women who rushed to his aid. One woman, was the wife of a local deputy sheriff and jumped into action calling 911. The second woman was a nurse practitioner who immediately began administering aid and CPR. Officer Paul Dunn had been on the force for more than 20 years and was 50 years old.

He left behind his new wife of nearly two months, who was also a detective with the Lakeland Police Department. They were married on November 15, 2019. A fellow officer, Sergeant Perez, attended their wedding and described the peace that came over Paul when he met his wife, Detective Laura Dunn. He went on to say that something about Laura simply cancelled out all the adversity Paul had ever felt in life. He stated “the sun rose and set in her.” His new family along with his close-knit family in blue, is mourning their hero, husband, and friend, Officer Paul Dunn.

Police officers face many hazards in their jobs. They rush into danger when others run away. They are the heroes who should wear capes, but instead carry a badge, it is because they are the ones who enforce the laws and keep the public safe in their homes and lives. Officers face the danger of facing deadly criminals on a daily basis. Each day they put on their uniforms they face a very real risk of being attacked, wounded or even killed by the criminals they face. They can also be killed or wounded by friendly fire.

There are daily risks of work-related accidents such as car crashes, motorcycle accidents, falls and other injuries during chases or rescue operations. Officers often suffer from health problems and psychological issues due to the extreme amount of stress their job places on them. The constant adrenaline of extreme fear, physical danger, long work hours, and exposure to violent situations has its side effects. This type of stress often leads to health issues as well as the constant exposure to contagious diseases during arrests, like HIV and Hepatitis, policing can be one of the most dangerous occupations. Officers who do this type of work, don’t do it for the pay, they do it for the concern of their families, neighbors, and the care they have for the communities they live in.

Motorcycle police face their own set of dangers in operating their motorcycles, police chases, and the exposure to criminal elements, traffic, and even the weather. Vehicle crashes are a danger to police work, but especially dangerous to motorcycle officers. Statistics show that fatalities to vehicle crashes overall for police officers has risen. From 1980 to 2008 there were 772 vehicle crashes that involved police fatalities, with 823 officers killed in the line of duty. That is 823 individuals with family and friends who put on their uniforms to protect the community and did not return home one day.

Motorcycle crashes have statistically stayed about the same during that time period. There are approximately 4 fatal motorcycle crashes involving police officers in the line of duty every year. Most motorcycle accidents involving officers occur in the afternoon between the hours of noon to 4:00 pm. Through investigations of these crashes it is found that 67% of fatal motorcycle accidents involving police officers are what is known as angle collisions. This is where the officer lost control of their motorcycle while in pursuit of a suspect and the bike began to turn sideways at the point of collision. Head on or rear end collisions with motorcycle officers that have caused fatalities occurred in approximately 13% of these accidents, while 8% were sideswipe type of accidents.

The exposure that motorcycle officers face is a great challenge as they drive into the face of danger to keep their communities safe. Officers who take this position on require hours of additional training and they do it for the love of their family and neighbors, and some for the love of motorcycles. However, it isn’t all “Chips” out there, being a motorcycle officer is extremely dangerous.

Officer Paul Dunn was considered a local hero, a good friend to all, and leader in the community. Due to the respect he had earned thousands came from all around to mourn his passing at his funeral. Thousands of police motorcycle officers from Florida and around the country came to honor him and show their respects to a blue family member. They celebrated his life together through tears and laughs, as they remembered his service and heroism as he served the community around them. Police Sgt. Perez described him as infectious. He stated that Paul had a smile that could turn a hardened criminal into a tattooed teddy bear.

The Lakeland Police Department is divided into several bureaus. They have broken their services down into the Administrative Bureau, which is essentially the Police Chief’s office and administration services for the force. There is also the Neighborhood Services Bureau (NSB) which would be your patrol officers or beat cops. The Investigative Services Bureau (ISB) which is the crime investigation unit or detective unit. The department also has an Assistant Chief which helps to oversee the various bureaus.

The department operates much like a close-knit family that works together to keep the community they care about and live in safe. There are 231 full-time sworn officers in the Lakeland Police Department, and 119 civilian employees. Statistics show that in 2016, this blue family worked together to solve 1,472 complete crime lab cases. Lakeland is a city on the east side of Tampa, and the department is responsible for the safety and security of more than 110,500 individuals. After 20 years on the force, Officer Paul Dunn made an impact on the department, his fellow officers, and the entire community of Lakeland. The city, his coworkers in blue, his family and many friends are mourning his tragic loss to the community.