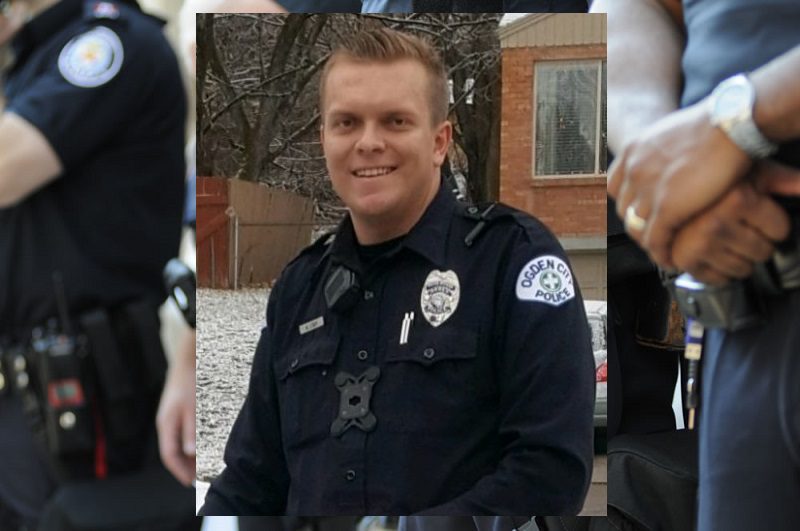 On Thursday, May 28, 2020, Utah Police Officer Nate Lyday was shot and killed while responding to a domestic disturbance call. Nate Lyday was 24 years old and was starting his career with the Ogden Police Department. He had been serving his community as an officer for over a year.

A call had come into 911 from a terrified woman about a man who was threatening to kill her. Police Officer Nate Lyday and several other officers responded immediately. They approached the man on the front porch of a house in the 300 block of Jackson Avenue.

The suspect was uncooperative when speaking with the police and took an opportunity to run inside the home. As officers approached the door, the man then opened fire, shooting through the door, killing Officer Lyday.

Another officer, who works with the Utah Adult Probation and Parole, was also shot, but the injuries are considered non-life-threatening. The Ogden-Metro SWAT team was called, surrounding the home. Once inside, they found the male suspect deceased. He had been killed by return gunfire.

Police Officer Nate Lyday is being hailed as a “son of Ogden.” Ogden, Utah, is where he was born, raised, educated, lived, loved, served, and died. He was a second-generation law enforcement officer in Ogden. He was loved, known by many; with great pride, the residents saw a future in Officer Lyday. A future with him, and for their city. All lost in seconds, answering what is considered an officer’s most dangerous type of call, one of domestic violence.

Police Chief Randy Watt had this to say during the briefing. “Officer Lyday sacrificed his life on behalf of a frightened and fearful family at the scene.”

Domestic Violence on the Rise

The most dangerous call an officer can face is one of domestic violence. There is no way of knowing the situation that they are walking into, and the mental state of most abusers is one that they feel empowered using physical threats and violence on others, this extends to police officers.

New York is reporting a 30% increase in domestic violence 911 calls coming into their police stations. These are people desperate for their safety and sometimes that of their children, yet when officers respond to help, they face putting their lives in danger. Other cities are reporting similar numbers. Boston has had a 27% increase in aggravated domestic assaults. Seattle shelters have seen a 16% request for services. This increase is putting a strain on every part of our system for helping those in need.

A second-generation officer, Nate Lyday, was proud to have become a member of the Ogden Police Department. He looked forward to a long and rewarding career serving the community he knew and loved.

The Ogden City Police Department and its officers serve a community that spans 26.6 square miles. Currently, the department has over 140 sworn officers and 80 non-sworn volunteer professionals. All are committed to protecting and serving the community of Ogden.

The Ogden City Police Department has a rich history, dating back to 1855. It consisted of several law enforcement officers who worked under the mayor’s direction when it was initially organized. The moral standards of the Mormon church pushed the need for the police department’s beginnings. Drunkenness, profanity, pilfering, fist-fighting, and blocking of the public sidewalks were punishable crimes. Things have certainly changed over these many years, and the department has kept a detailed history of their past, which they share on their website.

Family and Friends Left to Question

Officer Nate Lyday is survived by his wife. They were preparing to celebrate their fifth wedding anniversary.

The news of Officer Lyday’s death came as a complete shock to his grandmother, Deanna Hatch. “Your mind can’t comprehend it really, it just hurts, all the way through and down to your toes… Nathan was, he was my hero, he’s been a hero all of his life.”

Tory’s heart, filled with grief, spoke of how he understands that their family is not the only one left hurting in this situation. He was not filled with anger, but compassion for the other family. “There’s another family here that’s hurting, there are some little kids who lost their dad and a wife who’s lost her husband as well, and we can be angry and all that but we don’t know what was going on with him, obviously something terrible, so for the community to have compassion upon them is very appropriate, and we just like to state to that family that our heart cries out to them, and we wish them the best.”

We should all learn to have this type of graciousness to give others in our lives. Funeral arrangements are pending.