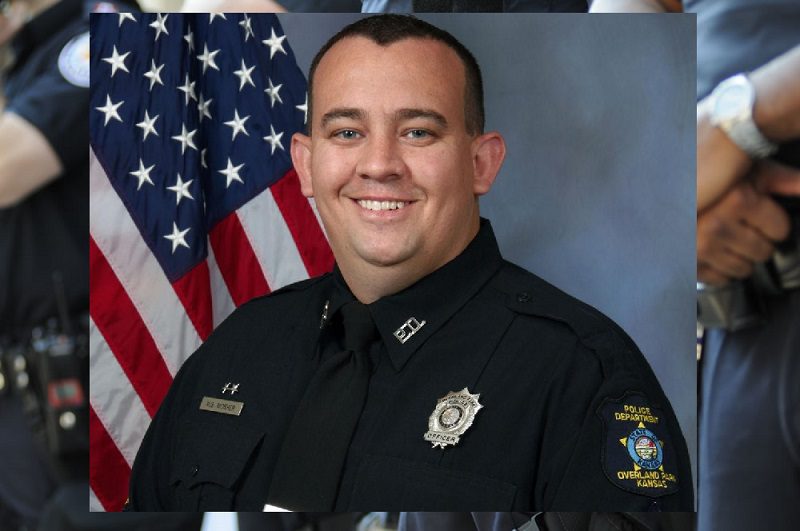 On Sunday, May 3, 2020, the Overland Park Police Department lost one of their officers in a fierce shootout with a hit-and-run driver. Police Officer Michael S. Mosher, age 37, was shot and killed when he attempted to confront a driver whom he had witnessed in an accident.

Mosher, a 14-year veteran, was in uniform and en route to work just before his 6 p.m. shift. He witnessed a hit-and-run accident that occurred near the intersections of Antioch and West 143rd St.

When Mosher noticed the driver speeding away from the scene, he followed, calling in the pursuit to headquarters. The driver came to a stop near Mackey and West 123rd St. when he got out of his vehicle and began approaching officer Mosher in a threatening manner.

Officer Mosher ordered the suspect back to his vehicle, and he refused to comply. Instead, he opened fire on Mosher, and a gun battle began. Both Officer Mosher and the gunman were shot during the incident.

Officer Mosher was taken to a local hospital where he succumbed to his wounds. The gunman died at the scene.

The gunman’s family had expressed concern about him just two days before this incident. They had filed domestic violence charges against him.

Police Officer Michael S. Mosher gave 14 ½ years of his law enforcement career to the Overland Park Police Department. The agency (OPPD), was formed in 1960. Originally the area was covered by the Mission Township Police Department. This department disbanded. When Overland Park officially became a “first-class city,” it was determined that they needed their own police department.

Historically, the first officer the department lost was Kansas Highway Patrolman Sgt. Eldon K. Miller. He was shot and killed in Overland Park on January 19, 1968. He was trying to stop a bank robbery. The department has had its share of tragedy but has always come together as a team and a family.

Young Family Left Behind – Speaks Out

For his actions, Mosher received the Gold Valor Award for bravery in stopping an active shooter. Officer Mosher was a dedicated police officer who had been leading his department serving as President of the Overland Park Fraternal Order of the Police.

Kansas Attorney General Derek Schmidt made a brief statement regarding the passing of Officer Mosher. He expressed remorse for the family, noting that it was a “senseless death” and that it should remind everyone of the debt of gratitude owed to all law enforcement officers.

She spoke of how everywhere she looked, and she could see members of the public, neighbors, friends, kids, all standing with their hands over their hearts, saddened by the loss of her husband.

Corinne went on to make this comment: “We looked into their faces and saw caring in strangers that didn’t know us and didn’t know Mike. And it didn’t matter, because he belonged to them and they had lost him, too. When I saw that, children were standing still in basketball courts and a young family with several kids, and a young girl was holding a large American flag.”

The community touched her, filling her with a strength that she will carry with her into the future.