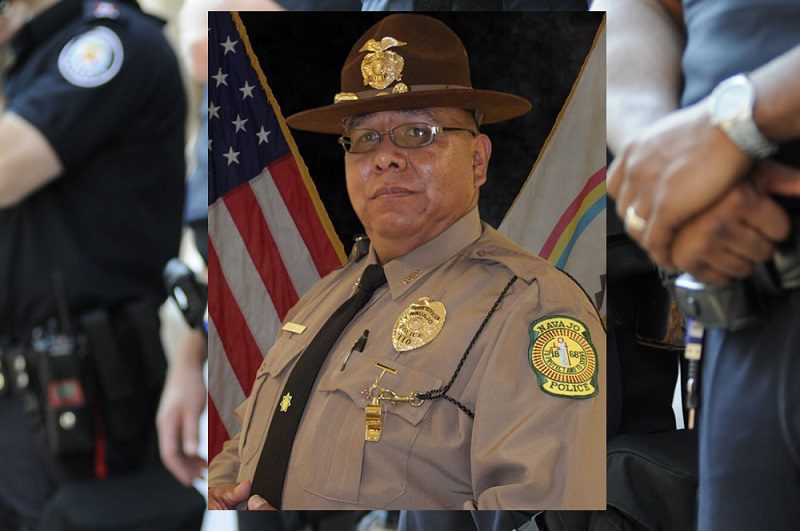 The Navajo Nation lost one of their beloved police officers due to COVID19, on Friday, June 19, 2020. Police Officer Michael Lee, age 50, had served with the Navajo Police for more than 29 years. Officer Lee had been working to take care of the community during this pandemic, taking extra precautions himself, teaching others to do the same. It is presumed that he contracted the virus during his police duties.

Officer Lee had devoted his life’s work to the Navajo Department of Public Safety and was most recently assigned to the Chinle Police District.

Funeral arrangements have been made to be live-streamed, as COVID is ravaging the community. The only attendees will be immediate family. It is expected to begin on June 25, at 10 am. The service will be held at the Potter’s House Christian Center in Chinle, Arizona.

The family’s primary concern is the health and safety of the members of the community. A statement had been released to express these concerns. “The family of Officer Lee is prioritizing the safety and well-being of everyone who wants to pay their respects and emphasizes adhering to public health orders as the service becomes finalized.”

Officer Lee had an exemplary record as an officer for the Navajo Police. During his 29-year service, he was assigned to a variety of roles, including patrol officer, sex offender registration, and notification act officer. He loved the community he served and took pride in his position as an officer.

Police Chief Phillip Francisco offered these remarks in a released statement. “Officer Lee was adamant about keeping family members safe during this pandemic. The family is planning his service to honor his role as a protector and are prioritizing safety and well-being for family, friends, and everyone who has been touched by the life of Officer Lee.”

The Navajo Nation has faced unrelenting cruelty while facing coronavirus. Lack of proper public support, lack of funding, has left the Navajo people suffering. To date, their community has had a total of 7,045 positive cases, with over 355 deaths. These numbers are with one hospital report still pending.

The Navajo reservation stretches from parts of Arizona, northwestern New Mexico, and into southeastern Utah. The nation has been feeling financial pressures as they have faced seclusion, shutdowns, and economic deprivation. Some necessary businesses are open; however, weekends are marked as a complete shutdown as they work to gain control over the spread of the virus.

The Navajo Division of Public Safety is the Navajo Police Departments of the Navajo Nation, located in the southwestern area of the United States. It is headed by a Chief of Police, then divided into units led by eight captains and eight police lieutenants. The organization was formed in 1872. Today, the Navajo Police has approximately 550 employees. This includes 134 sworn officers.

The Navajo Police are responsible for nearly 27,000 square miles and are considered a civilian police agency. The Navajo Police dissolved approximately three years after its origins in 1872. There continued to be a police presence after this time, though its support came from the United States government. After 1959, upon request of the Navajo Tribal Council, the police became re-established under Navajo law.

Community Servant Lost to All

Police Officer Michael Lee left behind his wife, children, other extended family members, and the community he loved and protected. He had a great concern about the tragic loss that COVID was bringing to the Navajo and other Native American communities.

Navajo Police Chief Phillip Francisco described the loss of Lee, expressing both grief and his condolences. “It is with great sorrow that the Navajo Police Department announces the passing of Officer Michael Lee. We are devastated and heartbroken. Officer Lee was a husband, a father, a son, and a protector of his community. We ask the public to join us in remembering his commitment and contribution to his community and to keep his family in your thoughts and prayers today.”