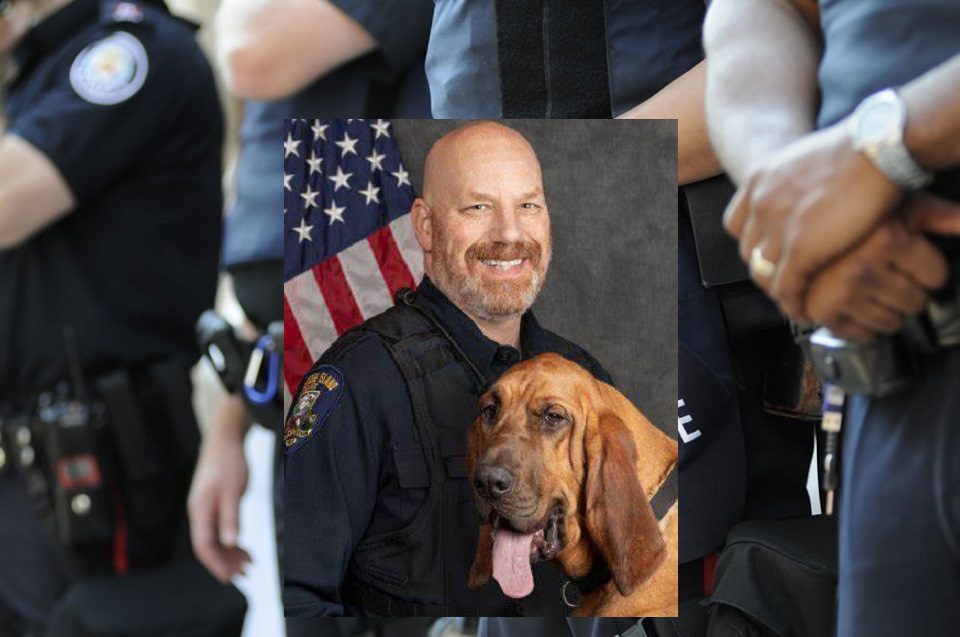 The cost of COVID19 has been staggering. First responders have been struck hard by the resulting pandemic. Washington officials were devastated to announce the loss of a local police officer to the virus. On April 10, 2020, Police Officer Kurt James Enget died from complications of the coronavirus. He was 49 years old. Officer Enget most likely contracted the virus while on duty.

Previously, in July 2019, Officer Enget and Whitney were both given accommodation and recognition for a job well done. Whitney is the only bloodhound K-9 in Washington State. They were called in to help with an arson investigation. The fires cost four people’s lives, and law enforcement felt that the suspect was still in the area. When Whitney arrived, more than 65 hours had passed since the crime occurred. It had also rained, and Whitney faced many challenges. Whitney, the bloodhound, began in the area on the edge of the crime scene. She then traveled through roads, fields, driveways, and backyards, leading officers directly into the campsite where the suspect was arrested. Both Officer Enget and Whitney were declared heroes.

Police Officer Kurt Enget was well-liked among community members and peers for his work with the Bainbridge Island Police Department. The BIPD serves the city of Bainbridge Island. Bainbridge Island is both a city and an island off the shores of Seattle, Washington. Transportation is available by ferry from Seattle to the island.

BIPD provides protection and security to the residents of the island. The department has 22 sworn officers. The officers provide police services to nearly 26,000 residents. Bainbridge Island is about the size of some state counties, with approximately 65 square miles. The history of the island is quite complicated and lengthy. The original residents of the island were the Suquamish people and their ancestors. While previously discovered by another explorer, it was in 1841 that US Navy Lt. Charles Wilkes was charged with surveying the island. Wilkes is given credit for naming the island. It was named after Commodore William Bainbridge, commander of the frigate USS Constitution in the War of 1812.

Losing So Many to COVID19

Families everywhere are losing loved ones to the coronavirus. Police Officer Kurt James Enget leaves behind his wife, three children, and two grandchildren. As an officer, the community, neighbors, friends, and other officers came forward to escort Officer Enget and to show honor to his sacrifice. There will be many who will be there to support the Enget family during their time of grief.

Police Chief Scott Weiss commented on the extraordinary loss. “He was one of our most loved officers on the island. Kurt was a very important member of our team, known by so many in our community, including those at the dog park where he often brought K-9 Whitney. He was a friendly and caring officer who embodied what it means to be a member of the Bainbridge Island Police Department. He was an irreplaceable colleague, dedicated to service to the entire community, and we will miss him greatly.”

The City of Bainbridge posted their grief on their social media pages. “Our hearts are broken. We are deeply saddened to announce the death of a beloved City of Bainbridge Island employee. Officer Kurt Enget, a five-year veteran of the Bainbridge Island Police Department, died this morning (Friday, April 10). Our entire city family is heartbroken as we mourn his loss and extend our support to Officer Enget’s family.”