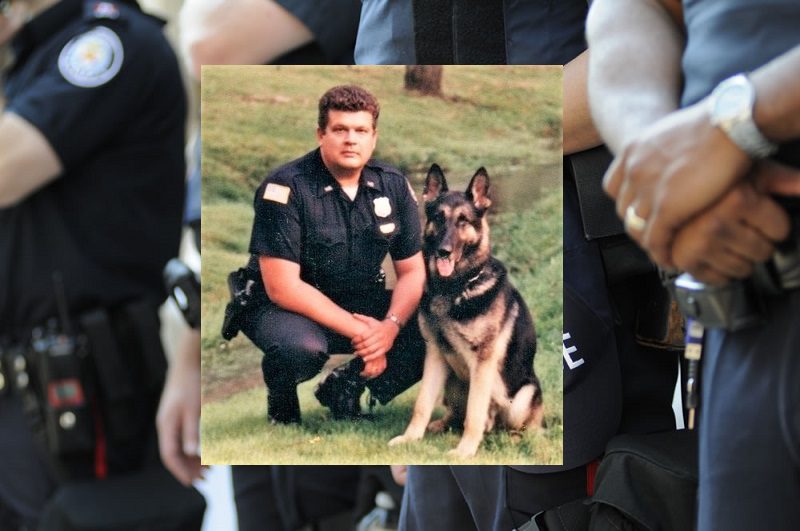 Police Officer Kenneth Reid Lester was described as a large man, a man with a big heart, and a good friend. He has suffered an unusual situation. On February 17, 1995, as an officer of the Richmond, Indiana Police Department he was on duty and rushing to respond to an alarm call. He had his lights on but had not yet turned on his sirens.

He rapidly approached the intersections of South 8th and South H Streets a tractor trailer truck was ahead of him changing lanes. Officer Lester attempted to pass the semi. As this happened, the truck also suddenly attempted to make a left turn in front of Officer Lester’s patrol car. It was a serious accident; the patrol car became lodged underneath the semi and Officer Lester suffered severe internal injuries as well as head trauma.

Police Officer Kenneth Lester was also a K9 Officer and his K9, Cheri, was with him. Cheri sustained minor injuries. He had followed a start of a family tradition, as his father, Officer Donald Lester, was an Indiana State Trooper. He loved being an officer and often worked the third shift. He had been with the Richmond, Indiana Police Department for over 14 years.

Officer Lester gave his life and career to law enforcement. He spent most of his life in Richmond, Indiana where he lived with his wife, Polly. He graduated from Richmond High School in 1976. He wanted to follow the example set for him by his father and began his law enforcement career when he found a job working for the Centerville Police Department. Here he was encouraged to attend the Indiana Police Academy. Upon graduation, in 1980, he officially became an officer for the Richmond Police Department.

Policing is an extremely dangerous career. While violent crime is often considered as the main danger that officers face, the public often does not realize that auto accidents are one of the leading causes of death and disability for officers. Each year the statistics continue to rise in this area as accidents account for more than 45% of officer line of duty deaths.

It is still early in the year; however, the Federal Bureau of Investigation maintains statistics on causes of law enforcement deaths and injuries so that through studies and education they can learn how to prevent future deaths. For the month of January, 2020, in the United States their studies show that nine officers were lost to us while on duty. Five of these officers died from auto related accidents. This is more than 55% of the total deaths for January.

Officers do receive specialized training, driving courses, and additional training throughout their careers. There are many contributors believed to be a part of the causes of so many accidents. These could be distractions, using technical gear while driving, speeding, and some are auto related accidents where officers are struck by other vehicles while handling their duties. Citizens can help reduce these types of accidents by following many state laws which require cars to change lanes or slow down when passing an officer on the job.

The 2016 Law Enforcement Officers Killed and Assaulted (LEOKA) Report states that 118 officers lost their lives that year. What isn’t listed in most line of duty death statistics is that during that same year, 57,180 officers were victims of some type of assault. Of those, 30% resulted in permanent injuries.

Currently, the long-term benefits for officers vary from state to state. Federally, the Public Safety Officers Benefits (PSOB) program was legislated by Congress in 1976. For injured law enforcement officers, for family members of those who are killed in the line of duty, it is the only federal resource available. Code 3 is working to change the benefit program as it stands now. The current standard has been a one-time payment that is deemed sufficient to help the officers and their families to supplement any care that they need. Many families need far more, for a much longer period of time. Police Officer Kenneth Lester is likely an example of one of those officers.

After the accident occurred on February 17, 1995, Officer Lester never recovered. He required intensive 24-hour care for the past 25 years. After the accident he had been transported to Wishard hospital in Indianapolis which is now called the Sidney & Lois Eskinazi Hospital. He remained there, getting intensive care around the clock until he passed on February 10, 2020, at the age of 62.

Officer Lester loved his hometown of Richmond, Indiana. The community is rich with history and in a beautiful flat area in the Midwest lands of Indiana. Though the area is part of the northern plains of Indiana it is near Hoosier Hill, the highest point in the state. Lester patrolled nearly 24 square miles of his community. A community with characteristic architecture and a past that reaches back into the depths of American history.

Frederick Douglas visited Richmond, Indiana often, and gave many of his speeches there. Henry Clay spoke there as part of his campaign to become president as the leader of the Whig party. Carrie Fisher, a famous feminist prohibitionist gave several speeches on the streets of Richmond. This is where she was known to have shouted, “Rum did that!”

Richmond, Indiana was home to Gennett records in the 1920’s. They were the first and most famous record company to begin recording in the jazz era. Richmond, Indiana and Gennett Records was the home of jazz. This is where the earliest recordings of Louis Armstrong, King Oliver, Bix Beiderbecke, and Hoagy Carmichael. Other famous recordings included Jelly Roll Morton, Blind Lemon Jefferson, Charley Patton, and Gene Autry.

The architecture of the homes and buildings downtown are world-famous. In 1806, Thomas Jefferson signed a bill to build the National Road to become America’s Main Street. This Main Street connects right into Richmond’s Main Street downtown. However, on April 6,1968, there was a terrible double gas explosion that destroyed many buildings, killed 41 local citizens and injured more than 150. It was one of the worst days in the history of Richmond.

To honor the victims, this part of Richmond was redesigned. It was completely closed off and a park like setting was created, it was named The Promenade. It was a beautiful downtown park like setting with many shops facing the lights and walking area. At the time of the accident that Officer Lester this is what downtown Richmond would have looked like. After spending 25 years in intensive care, the downtown has changed, the Promenade was removed. The Main Street was reopened to through traffic. Never recovering from his injuries, Officer Lester never got to see the changes his home town as it has grown to adjust to the modern era.

Officer Lester served with the Richmond Police Department for 17 years. He began with the department right after graduating from the Indiana Police Academy. Having grown up in Richmond and starting his own family in the community, it was a place that he loved and wanted to serve and protect. He followed his father’s footsteps, who was also a law enforcement officer, and wanted to give back to the hometown that he loved.

The Richmond Police Department was established in 1834. It began starting off with swearing in two officers. Today the department has 76 of the best men and women in law enforcement. The department is extremely proud of their staff and officers. They are all highly professional and have sworn an oath to protect the citizens of Richmond, Indiana. The department also includes many volunteers and support staff, as well as reserve officers.

Officer Lester was a typical Hoosier and had many friends and dear family members. He was well-loved by many in the community. He was an active member in the F.O.P. at the John W. Henniger Lodge #63 and a part of the congregation at the Hodgin Road Christian Church. He was a fisherman and a hunter. Some of his hobbies include watching NASCAR, airplanes, motorcycles and he was involved in shooting sports.

He left behind his wife of 41 years, Polly Lester. He also had a son, Andrew Reid Lester and a daughter, Kendra Lynn Lester. He also had many other cousins and relatives that stood with him throughout the years as he bravely fought for his life. A fellow officer and friend Aaron Stevens, was in his car when he got the call that his friend had passed away. Stevens, who has served with the department for over 34 years, stated that he had to pull over to reflect upon his friend’s life, pray and cry.

Officer Kenneth Reid Lester, touched many lives and bravely fought to keep his own. He will be missed by many, and now can rest in peace knowing his fellow officers and friends will hold the line in his place.