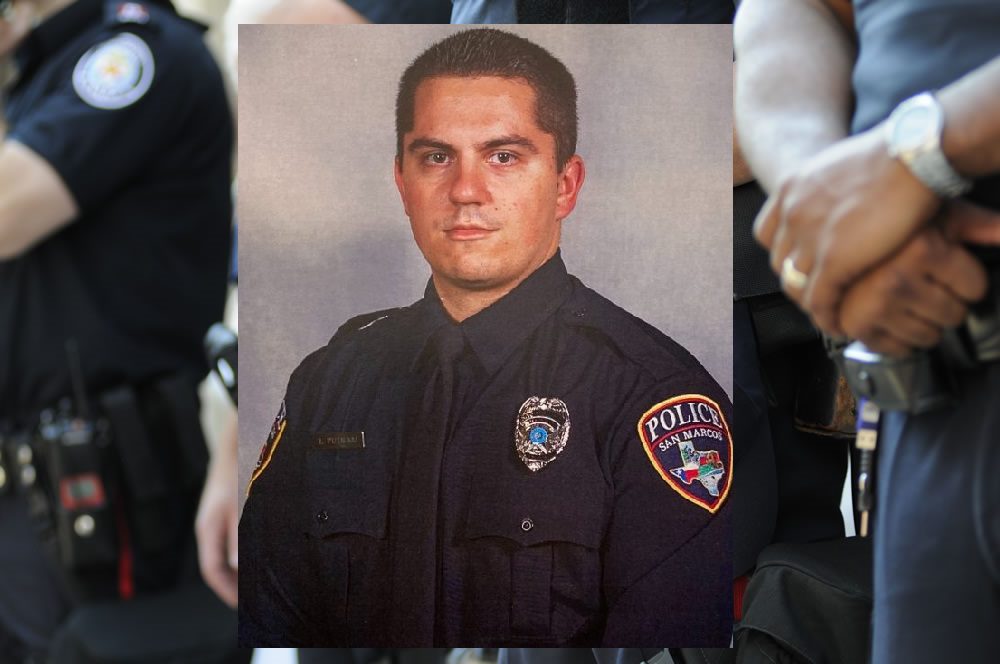 On Saturday, April 18, 2020, three San Marcos police officers responded to a domestic assault call around 7:00 pm. The incident took place at an apartment complex in the 2900 block of Hunter Road. The three officers met at the complex. Someone had called in about a man who had hit his wife and was threatening others. When the three officers entered the apartment, that is when everything broke loose.

San Marcos Police Chief Bob Klett said this about the incident during a briefing while holding back tears. “As they entered, he ambushed them. He was prepared, ready for them to come in and started shooting immediately, and there was nothing they could do to escape the gunfire.”

Officer Justin Putnam, 31, was murdered by the gunman as he entered the apartment. The other officers, Franco Stewart and Justin Mueller, were critically injured. The ambush attack was considered vicious, taking the life of one officer and nearly taking the lives of the other two. They were rushed to Ascension Hospital in Kyle, Texas, where they both underwent emergency surgery to save their lives. They are stable but still considered in critical condition.

Chief Klett assured the press at the briefing that all three officers were wearing protective gear. He said the suspect had prepared and waited to ambush them as they walked through the door, giving him ample time to consider his move and how to do the most damage. After shooting the three officers, the gunman turned the gun on himself, committing suicide.

Texas Governor Gregg Abbott shared his thoughts on Twitter. “Our hearts are heavy tonight with the report that San Marcos Police Officers were shot in the line of duty. Join Cecilia & me in keeping these officers in our prayers.”

Putnam, who had been with the department for 5 ½ years, was always meant to be a police officer. His sister Kelsea Putnam, who is eight years younger than Justin, described how he had always protected her. “Justin was born to be in this line of work – always a protector since the day I was born. He took the role seriously. He was like a second dad.”

She also spoke about how they almost knew instantly that her brother had been involved in a shooting incident. The entire family knew he died even before getting the phone call. Kelsea Putnam explained how that happened. “If anything would happen, mom would always get a text from him, and he would always say, ‘Mom, I’m OK, but you’re going to see something on the news soon, but just know I’m OK. Then we see it on the news, and we haven’t gotten a text from him, so we kind of knew.”

Officer Putnam was engaged to be married. He had planned a wedding with his fiancé for November of this year. Officer Putnam also had dogs he doted on that he adored, that will now wonder why he didn’t come home. He lived with his soon-to-be wife and his dogs, that was his new family, according to his sister.

The Most Dangerous 911 Call

According to the Department of Justice statistics, the most dangerous 911 call that Police face in the United States is for domestic violence. Most people are aware that domestic violence and abusers are dangerous for women. Still, just as women themselves are in danger, an officer faces much more danger for answering these types of calls.

Statistics show that in 2017, more officers were shot answering domestic disturbance or domestic violence type calls than any other type of call. The National Law Enforcement Officers Memorial Fund shows that 136 officers were killed from 1988 to 2016 while responding to domestic disturbance calls. In comparison, the number of officers who were killed during drug-related arrests was 80. The significance in the difference of danger for answering the call to family arguments or otherwise should encourage the public to do more to get involved in community domestic violence programs.

The San Marcos Police Department is a medium-sized law enforcement agency that is responsible for providing safety and security for the residents of San Marcos, Texas. The area that they patrol covers 30.3 square miles and has approximately 64,000 residents. It is a Texas college community as it is home to Texas State University.

The department can learn about forensics and other crime scene techniques in their backyard. San Marcos is home to the Forensic Anthropology Center, which is one of the four existing body farms for police and law enforcement studies in the United States. It is considered the largest forensics research facility in the world.

The San Marcos region has had a great historical impact on the world. It is here that archeological evidence was found indicating that along the San Marcos River, material here was associated with the Clovis Culture, which is more than 10,000 years old. Hunter Road, where the incident occurred, taking the life of Officer Putnam, was discovered in 1689 by Spaniard Alonso de Leon. His troupe of men helped blaze the Camino Real, which centuries later became Hunter Road, Hopkins Street, and Aquarena Springs Drive. A permanent settlement did not begin, however, until after 1846. The department is responsible for an area that is rich in world history.

Communities and families from North Austin to San Marcus gathered together on the sides of the road to honor the procession for Police Officer Justin Putnam. The processional event happened when a caravan of many police officers and their patrol vehicles escorted Putnam’s body from the Austin Medical Examiner’s office to the Thomason Funeral Home in San Marcos.

Combined Law Enforcement Associations of Texas (CLEAT) Executive Director said something significant regarding the passing of Officer Putnam. “It’s a tragedy any time there’s a loss of life of a law enforcement officer on duty. They have a family; they’re human beings, they’re regular folk, they’re doing a very difficult job. In the line of duty, especially when they’re murdered in the line of duty, what’s not really understood, I don’t think that it’s not just the family, but the public has lost something as well.”

Lori Mameli, volunteered her time to go through the streets of the North Austin community where Officer Putnam grew up and gave out blue ribbons for homeowners to put around their trees. She wanted to help the community come together and demonstrate their support for his family. The entire neighborhood stood and wept as the procession went through.

Due to prohibitions regarding social gatherings, funeral arrangements are still pending.