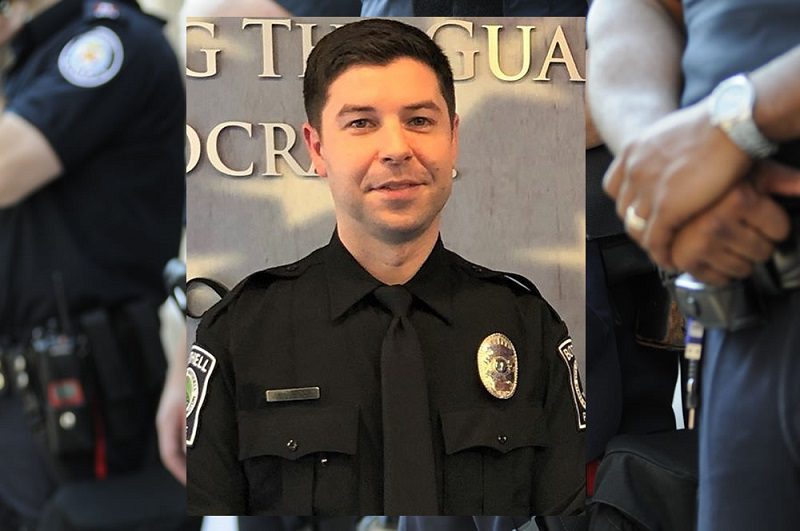 Officials were grief-stricken to announce the loss of a new police officer who died due to gun violence. On Monday, July 13, 2020, Police Officer Jonathan Shoop, was shot and killed after making a traffic stop. Shoop, age 32, had joined the Bothell Police Department just one year ago.

Around 9:30 p.m., Officer Shoop and another officer attempted to pull over a vehicle for a traffic stop, which began a pursuit when the driver refused to stop. The suspect took off from the scene and struck and seriously injured a pedestrian. Near the 10300 Block of Woodinville Drive, the suspect crashed his vehicle.

The suspect then emerged from his vehicle and opened fire on Shoop and the other officer striking them both. Shoop was shot and killed while his partner was seriously injured. The suspect then fled on foot but was apprehended the following morning hiding out on a roof.

Officer Shoop was a newly minted officer on the Bothell Police force, a job he had wanted for many years. He had grown up locally and was well known in the community by many, and his death has come as a shock to the local citizens. He previously spent time serving in the U.S. Coast Guard before becoming a full-time police officer.

Officer Shoop had died at the scene of the shooting, while his partner was rushed to Harborview Medical Center in Seattle. He was treated for his wounds and released the following morning.

The Bothell Police Department commented on their Twitter account regarding the loss of Officer Shoop. “Jonathan was a dedicated officer who served the City of Bothell with professionalism and compassion. Jonathan was well-liked amongst his peers and throughout the community. Officer Jonathan Shoop will be dearly missed.”

Beth Lakhan, a Bothell resident, spoke out about the loss of an officer in her community. “Their work is just so valuable and so cherished, and we’re so thankful for their willingness to give their lives to protect ours.”

Policing is a job that carries with it the painful burdens of all society’s problems. Officers are expected to handle a variety of social issues, from crime to homelessness. Most officers take the job of policing to give back to the people around them, their families, neighbors, and the community in which they live. They realize each day as they ready for their shifts when officers put on their uniform and badge that this may be the day they never return home. Yet, they still go, they face dangers and help in any way they can.

Statistics regularly show that every year gun violence is the number one cause of line-of-duty deaths among law enforcement officers. The FBI demonstrated that of the 48 felony deaths committed on law enforcement officers in 2019, 44 of them involved firearms. In 2018, 52 officers were shot and killed while on the job. Efforts to maintain statistics are made to study the causes of deaths and to find ways to reduce them in the future. One study found that a high percentage was in direct relation to domestic violence calls. Many departments will now send more than one vehicle and back up to determine the situation and have more officers on the scene. These tactics are part of a new understanding of how gun violence impacts officers’ lives in doing their jobs.

Police Officer Jonathan Shoop was living his dream of being an officer with the Bothell Police Department. After serving with the U.S. Coast Guard, he continued to want to make an impact on others’ lives. He had served with the department for just one year and was still considered a rookie.

In his short time, he made a significant impact on the people of Bothell. He was well known and had lived in the area his entire life. Residents speak highly of him and the contributions he made in their lives in the short time he was an officer for their community. One resident even commented on his friendliness and that he would often pull over his patrol car, get out to talk with him as he walked through the park with his dog. His ability to care about others is what has made this so difficult for many.

The Chief of Police for the Bothell Police Department is Ken Seuberlich. He recently has felt the impact of the protests across the nation and wanted to reassure Bothell residents that they understood and would work with them on transparency and safety issues. He was able to communicate their ability to address their use of force policies and how they would work to make the community safe and prosperous without fear as a tactic.

A Community Loses A Hero

Police Officer Jonathan Shoop is survived by his fiancé, his mother, and two brothers. The community, his co-workers, extended family, and neighbors all share in the grief of a fallen hero.

The Bothell Police Department created a memorial site for the slain officer in front of the Bothell City Hall. Many residents, families, and children included have come to bring cards and flowers to show their respect for the life that had been lost. Many are saddened, but spoke nothing but praise for the officers that serve their community.

Bothell Mayor Liam Olsen released a statement concerning the loss of Officer Shoop. “Our hearts are broken. Yesterday, July 13 marks a tragic day in Bothell’s history. Police Officer Jonathan Shoop was shot and killed in the line of duty. A second Police Officer was also shot but was not seriously wounded and released from the hospital.

On behalf of the entire Bothell City Council, we send our thoughts and prayers to Officer Shoop’s family and want our Bothell Police Department to know we grieve with you. You have our unwavering support during this incredibly difficult time.”

Brandon Roy, a resident, brought his wife and young children to the memorial to show their grief and respect for the slain officer. “We’re a tight-knit community. We tend to come together pretty well when tough times come, so I thought I’d bring them down and support the police out here.”