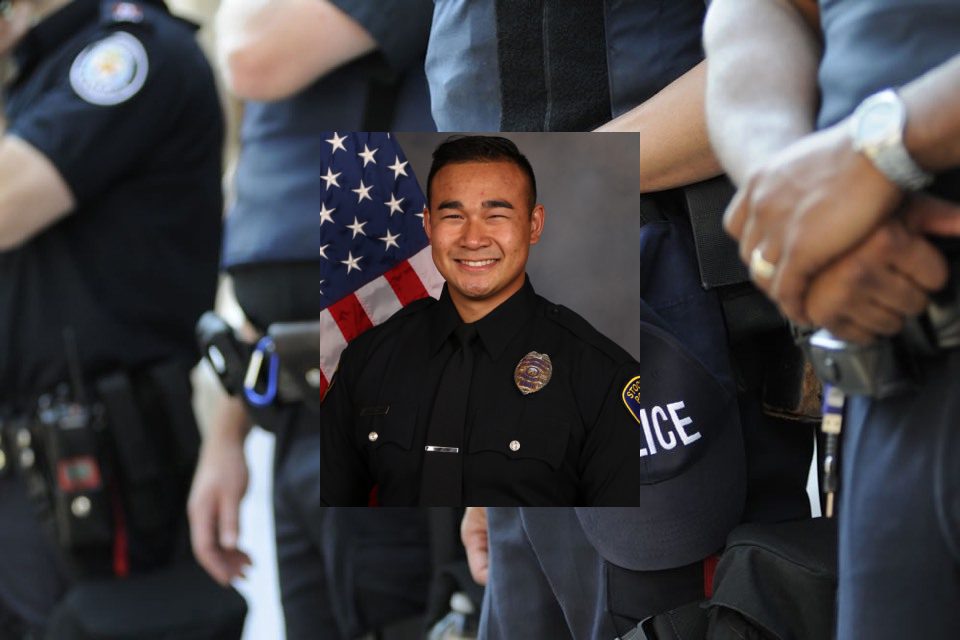 On May 11, 2021, California authorities were shocked to come forward to announce the loss of a local police officer to gun violence, the second in less than 24 hours. Police Officer Jimmy Inn, age 30, was shot and killed while responding to a domestic disturbance call. He had served his community with the Stockton Police Department for more than six years.

Officer Inn responded to a 911 call regarding a domestic violence situation around the 4400 block of La Cresta Way. As he approached the residence near the door, a man came out of the home with a weapon and shot Officer Inn. A second officer, arriving at the home, immediately pulled his gun and rushed to help Officer Inn. He exchanged gunfire with the subject.

The shooter went back inside the residence. He came back to the door seconds later with an eight-year-old boy. He pulled him in front of him, putting the child between him and the officer, then he began to strangle the child. A bystander tackled the subject, and as he reached for his weapon, officers shot and killed the man.

Officer Inn was given immediate life-saving treatment and rushed to the nearest hospital. It was there that he succumbed to the wounds.

The Stockton Police Department hired Officer Inn in December 2015. He had been assigned to the Field Operations Division.

Domestic violence calls are considered one of the most dangerous calls that an officer can handle. It makes sense. The person who is abusing another has no respect for other people. The feeling of entitlement and power that comes from long-term abusive behaviors means that when someone else intervenes, even law enforcement, there is no respect for them as human beings either.

Many departments now require that an entire team go to the scene when there is a domestic violence call. This means at least two officers and backup. During the pandemic, domestic violence hit an all-time high in the United States, and law enforcement agencies are implementing new strategies to keep their officers safe. Looking forward, we hope to change what the US Department of Justice has called the “most dangerous calls handled by the police.”

Officer Jimmy Inn gave his life to the community and the Stockton Police Department. He had been an officer for over six years. The SPD is the primary law enforcement agency for the City of Stockton, California. It is a reasonably large agency with nearly 400 sworn officers. These officers provide protection and security to almost 255,000 residents.

Like many California police agencies, the SPD has been very progressive in training and meeting together with the needs of the members of the public. They have incorporated training programs such as ongoing de-escalation training, best practices in less-lethal force, and implicit bias training. Their mission includes trust-building with the community and mutual respect.

Police Officer Jimmy Inn is survived by his wife, his seven-month-old son, and two stepchildren. His wife, Tela, is also a Stockton police officer. It will take the support of neighbors, friends, and community to rally behind them and help them through their tragedy. Law enforcement from all across the area will participate in escorting Officer Inn to his final resting place.

The Lodi Unified School District posted their shared grief on Facebook “We send our heartfelt condolences to the Stockton Police Department and those who are grieving the loss of their loved one today. We appreciate the officers who bravely serve our Lodi Unified community, and we share their sadness in losing one of their own today.”

Sophaline Mao, an active member of the Cambodian community, shared with others on Facebook what a great officer and representative of the Cambodian people that Officer Inn had become. “Sadness hits our own community here in Stockton, California as we lose Officer Jimmy Inn of the Stockton Police Department. Jimmy always had such a warm, contagious smile each time I ran into him at the Cambodian Buddhist Temple. We pray for Jimmy’s family, wife, children, and the entire Stockton community as we lose one of our heroes who was just doing his job to protect and serve. Rest in heaven, Officer Jimmy, and we are proud of you for being a Cambodian-American role model.”