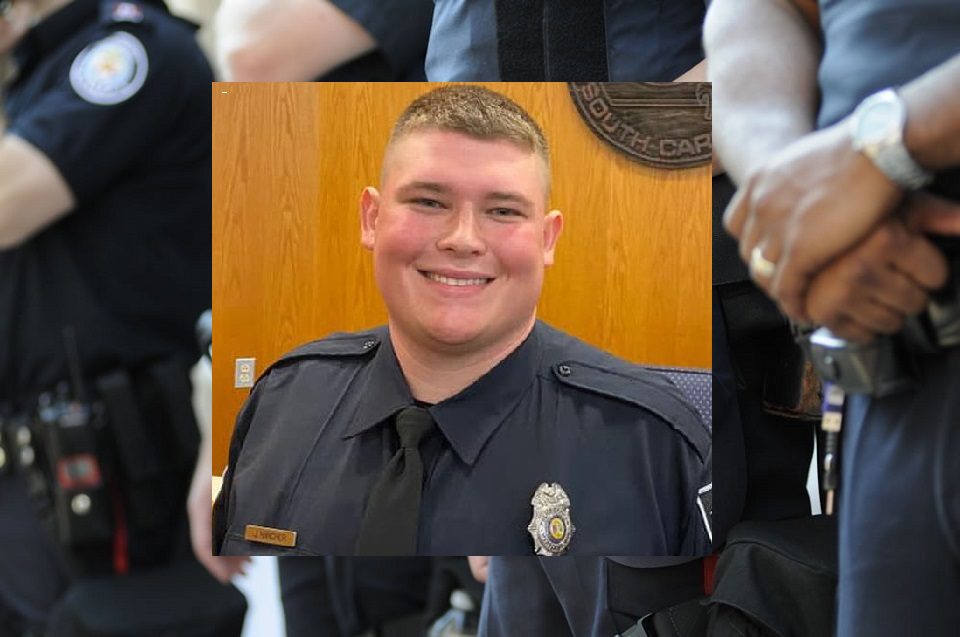 On Saturday, October 3, 2020, South Carolina officials were stunned to announce a young new officer’s death due to gun violence. Police Officer Jacob Hancher, age 23, was shot and killed while responding to a domestic violence call. Domestic violence calls are considered the most dangerous situations that an officer can respond to. Hancher had been looking forward to a long career as a police officer and was also a local volunteer firefighter.

Officer Hancher and several other officers responded to a 911 call regarding a domestic incident at an apartment near the 400 block of 14th Avenue south of Myrtle Beach at approximately 10:00 pm. Upon arrival, a man opened fire on the officers, killing Officer Hancher and wounding another. After a search, the man was found a short time later, deceased from a self-inflicted gun wound.

Two witnesses came forward who stated they had heard the gunfire ran outside to determine the cause. They said that they saw some police officers helping another injured officer limp away and had him sit near the fire hydrant. Moments later, an ambulance came by and picked up the wounded officer.

Mayor Brenda Bethune called on prayers from the community on social media. “They need our community to show them love, support, and strength.”

Officer Hancher is the 38th officer in 2020 that has been killed by felonious actions.

Hancher was employed for a year before losing his life in a battle over domestic violence. A young man whose life and dreams were cut short. He had chosen to work with the Myrtle Beach Police Department, the department near where he resided. The MBPD is a large department with more than 300 sworn officers. The department offers a wide range of services, including protection, investigations, and rescue. The department believes in community involvement. The motto “See Something Say Something” is encouraged within the Myrtle Beach area. Officers listen to its residents and use community knowledge to find ways to serve better and provide a safe community to live and in which to thrive.

Family and Community Mourn Together

Police Officer Jacob Hancher is survived by his mother, father, stepmother, brother, three sisters, and grandparents. Friends, extended family, coworkers, and the community are coming to mourn together, demonstrating that the life given was not in vain.

Marti Shutte, a close friend of the Hancher family, stated her grief for losing her friend Jacob. “He loved the tradition; he loved the police force. He loved the community and died doing what he wanted to do. I just wish for his death to mean something. Jacob had a servant’s heart. He would want to bring peace and unity to his community; if anything can come from this, I hope it’s peace.”

Myrtle Beach Police Chief Amy Prock gave a brief statement about Officer Hancher and her family’s condolences. “He was a dedicated public servant, who upheld his oath to protect this community and made the ultimate sacrifice. He cared about the people he served and served with and absolutely loved the Myrtle Beach. I ask of you today to please keep Jacob, his family, and his fellow officers in your prayers.”

The Horry County Fire Department gave their condolences for losing one of their volunteers and his family. “Our hearts go out to Hancher’s family, friends, loved ones, law enforcement colleagues, and fellow team members here at HCFR during this difficult time.”

Senator Lindsey Graham added his condolences and commented on the hardships facing officers today. “The cops need our support now more than ever. I’ve never known a more difficult time to be a police officer.”