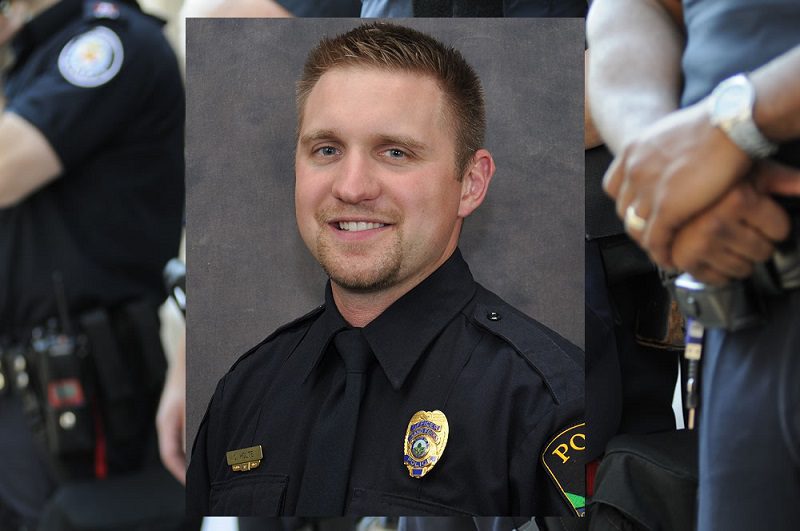 In North Dakota, the city of Grand Forks has lost its first police officer in the line of duty since 1966. The city has come to a stand-still in its grief.

It was Wednesday, May 27, 2020, when Police Officer Cody Holte was called on to assist the sheriff’s department with serving an eviction notice. The officers met up at an apartment in the 2600 block of South 17th Street. Officer Holte and another officer from the Grand Forks Police Department were there to be of assistance.

Part of this tragedy is that during the time of this pandemic, the officers were there not only to serve eviction notice but also to remove two residents and their belongings. When they knocked at the door, there was no answer.

Sergeant Kelly McClean and Corporal Ron Nord entered the apartment. As they did so, the 41-year-old male tenant made a dash for his bedroom. As officers attempted to make entry into the bedroom, the man inside opened fire.

Both Grand Forks Police Officers, Cody Holte, and Corporal Patrick Torok rushed inside to help the other deputies. Officer Holte was shot several times during the crossfire. He passed away after arriving at Altru Hospital.

Corporal Ron Nord was also hit and was treated and released from the hospital. He insisted on wearing his uniform and walking upright on his own upon release. Corp. Nord made this comment on Facebook regarding why this was so important to him. “I had to walk for Cody because he still with us, and he never got a chance to walk out alive.”

Grand Forks Chief of Police Mark Nelson commented about Officer Holte during a briefing about the incident. “If I had to pick a word, I would say a true servant, he served his community, asked for nothing in return, and made everyone around him a better person.”

Officers face extreme dangers when serving warrants of any kind. Often it is because the person that the officers are serving the warrant on have nothing left to lose; they are backed into a corner. A criminal justice professor at the Florida Gulf Coast University, Dave Thomas, said that from both studies and experience as a police officer, that officers face extreme risks when serving warrants.

Thomas made a comment on how the person being served feels backed against a wall. “The reason behind that is you are now dealing with somebody that knows they are wanted, and so in many instances, they feel they have nothing to lose.”

Houston Police Chief Art Acevedo continued the conversation. “Two things you know about police work: It can be tremendously boring 98 percent of the time and extremely dangerous and dynamic 2 percent of the time. But we know that they are always in danger, and it’s a dangerous business we are in.”

Acevedo continued comments on what happens when things go wrong. “Our officers don’t have a choice. They’ve got to enter that fatal funnel, go through it. The tactical advantage really is in the hands of the suspect. But that’s what they get paid to do. You know your brother is down. You go in.”

In the situation here in Grand Forks, the suspect must have felt desperate. The 41-year-old shooter and the other 61-year-old tenant had not moved but stayed with nowhere to go. There is severe unemployment in our country and a virus pandemic. Many states have enacted a moratorium on all eviction processes. They had nowhere to go. Backed against the wall and desperate, the shooter fired back 41 times. The results were that both Officer Holte and the 61-year-old tenant died in the crossfire. The shooter and another officer were seriously injured. Did this really have to happen?

Police Officer Cody Holte, age 29, was the first officer lost in the line of duty for the Grand Forks Police Department in over 50 years. It has shocked the community. He served with the department for more than three years.

The department, established in 1880, has a long history of serving and protecting the city of Grand Forks. The modern department of today, has over 90 sworn officers, 15 civilian employees, and 20 auxiliary staff. They are divided into two divisions, operations and administration, all serving under their designated Chief. The department is open and friendly with its community and is completely modern in all aspects.

Remembered as a Hero

The loss of Police Officer Cody Holte stunned the community of Grand Forks. He is remembered as a hero. He was an active member of the North Dakota National Guard, willing to serve and protect his community in any way possible.

Police Chief Nelson stated that they are giving time for the family to mourn in private. A go-fund-me page has been set up for his family.

Upon ending the briefing, Nelson added the following. “The lasting impression when you walk out of this room is I want Cody Holte on your mind because he’s on my mind 24/7.”