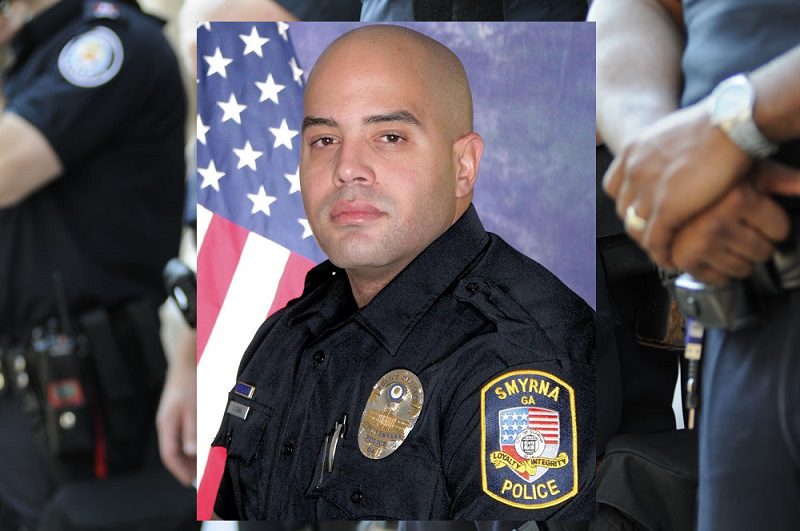 A drunk driver slammed into a Smyrna police officer, causing an accident and killing the officer. On April 20, 2020, Officer Christopher Eric Ewing was driving his patrol car along South Cobb Drive. Around 11:00 pm, he crossed the intersection of Oak Drive when another vehicle turned left in front of his patrol car. The other driver had been driving while intoxicated.

The 34-year-old officer died when the impact force threw his patrol car into a nearby BP gas station. His patrol car was demolished, with the roof of the car completely caved in. Local firefighters fought to rescue the officer, even cutting into the vehicle to attempt a rescue; however, Officer Christopher Ewing had died of his injuries.

The other driver was taken to a nearby hospital to be treated for non-critical injuries. He smelled strongly of alcohol but had refused a sobriety test at the scene. He was subsequently arrested and charged with homicide by vehicle, DUI, as well as tampering with the evidence.

Officer Christopher Ewing had served with the Smyrna Police Department for two years and had recently applied to be a part of the DUI Task Force. Before becoming an officer, he served his country in the U.S. Air Force Reserves. The Dobbins Air Force Reserve Base was saddened by the news and posted this on their Facebook page for all their officers’ support. “It is with great sadness we announce the death of TSgt Christopher Ewing, 94th Aerial Port Squadron. We extend our deepest sympathies to Christopher’s friends and loved ones as we share in their grief…94th Airmen, please be a source of support for each other in this difficult time.”

Police Chief Joseph Bennett had commented regarding his sadness over the loss of Officer Ewing. He stated that as an employee, he was the kind of officer that any department would want to have. Officer Ewing had also recently received a lifesaving award. Bennett stated that Ewing had a very bright future with the department, and it was a great loss to the agency, the community, and his family. “You can’t put it into words,” he said.

DUI Deaths on the Road

In 2018, there were 10,511 deaths from drunk driving crashes. Realize that this number does not include those who are injured. On average, 30 Americans per day die from others who choose to drink and drive. That average comes out to 1 death every 50 minutes. The deaths and damages alone have contributed to more than $44 billion in losses for the year 2018.

Officer Ewing knew how important it was to prevent drunk driving and had even applied for the specialized DUI Task Force. It is likely that he would have been accepted and spent the next several years working to reduce the number of drunk drivers in his community. Instead, it was a drunk driver that took his life. There are many options today, taxi’s buses, Uber, and more. There is no excuse for anyone to partake of alcohol and then get behind the wheel of what would then be an approximately 4,000-pound deadly weapon.

The Smyrna Police Department is the law enforcement agency that is responsible for public safety for the residents of Smyrna, Georgia. They employ approximately 91 sworn officers. The patrol area of Smyrna, Georgia, is nearly 15.59 square miles. The officers, which would have included Officer Ewing, were protecting and serving more than 57,000 residents.

Officer Ewing had just started his career with the department and had served two years. He would have likely served the community for many more. It is a loss to his family but also the community. Smyrna is a fast-growing medium-sized city in Cobb County, Georgia. It is located just northwest of Atlanta and is considered part of the Atlanta Metropolitan Area.

Historically, Smyrna is one of the fastest-growing cities in the Atlanta area. It is also one of the most densely populated. Pioneers began to settle the area in the early 1830s. By 1832, there was a religious encampment built called the Smyrna CampGround. It became a growing destination. It was named after the Biblical city of Smyrna, which today is located in Turkey under the name of Izmir. The city of Smyrna had a great deal of history that the residents and the patrol officers must appreciate.

Cobb County and law enforcement officers from all over the area came to create an honorable procession for the life of Officer Christopher Eric Ewing. His wife and three children survive officer Ewing.

Hundreds of officers came to show their respects, grieve with the family, and pay honor to Officer Ewing. They brought their patrol vehicles to Cobb County to create a procession to escort him from the Cobb County Medical Examiner’s Office in Marietta, Georgia, to the Carmichael Funeral Home in Smyrna, Georgia.

Other officers, citizens, families with their children, lined the streets to wave the officer good-bye and show that they honored the sacrifice he made by his ultimate sacrifice in protecting them. Funeral services are pending. The community, the Smyrna Police Department, and his family are mourning the loss of a great young hero.