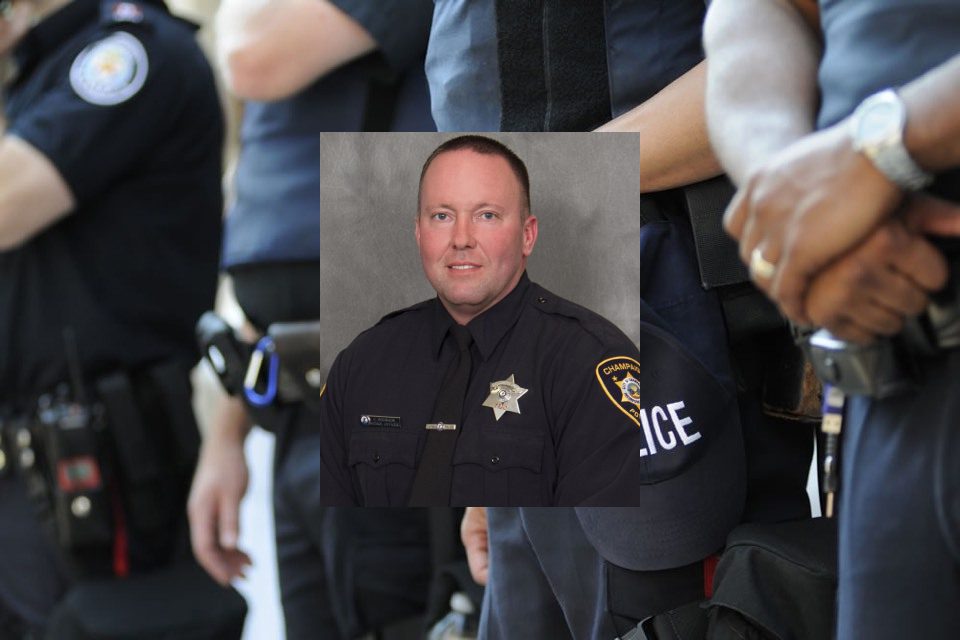 On Wednesday, May 19, 2021, Illinois officials gathered to brief the public about a shooting that took the life of a local law enforcement officer. Police Officer Chris Oberheim, age 44, died due to gun violence as he responded to a domestic disturbance. Oberheim had served his community through his work as a law enforcement officer with the Champaign Police Department for more than 13 years. The dispatch call numbers for Officer Oberheim were 703. In total, Oberheim spent 20 years as an officer. He spent his first seven years in law enforcement with the Decatur Police Department.

It was approximately 3:20 am when Officer Oberheim was shot and killed. He had been answering a 911 call to respond to a domestic disturbance. Oberheim and another officer arrived at an apartment in the 3200 block of North Neil Street.

As the officers arrived, they spotted the male subject thought to be involved in the disturbance. Without warning, the man turned and opened fire. Officer Oberheim and the other officer were hit. The officers returned fire, killing the shooter.

Oberheim worked for the Champaign Police Department. The CPD prides itself as a progressive and ethical law enforcement office. Part of the agency’s stated mission includes serving “as an honest, transparent and inclusive government agency that strives to provide the highest level of professional, comprehensive services…” The agency demonstrates a progressive and innovative attitude toward community policing.

To give the best quality police services to the city of Champaign, the agency surveyed many residents, community leaders, and groups to develop a fair, unbiased, and non-threatening approach to law enforcement. The residents in the area have gained a better, more trusting relationship with the agency as they continue to demonstrate transparency in their work.

Police Officer Chris Oberheim is survived by his wife and four daughters. Three of his young daughters attend school in the local district. The Oberheim family will need the support of all those around them to get through their grief.

Champaign Chief of Police Anthony Cobb shared his thoughts and condolences about the loss of Officer Oberheim. “His only intention was to serve, protect and help provide care before he was senselessly fired upon and killed. A true professional and devoted public servant, Officer Oberheim is remembered for his heroism, bravery, and the oath of office he honorably upheld in his commitment to duty. The Champaign Police Department, and the entire City of Champaign organization, express their deepest condolences to Officer Oberheim’s family, friends, and loved ones. I also want to express my care and support for all members of the Champaign Police Department who are mourning the passing of their friend and colleague. We ask that Officer Oberheim’s family and other Champaign Police Officers’ and their families’ privacy be respected during this difficult time.”

Illinois Representative Rodney Davis asked residents for prayer for those impacted by the violence. “Please pray for the family of Champaign Police Officer Chris Oberheim. His life was senselessly taken today while he was doing his job and keeping his community safe. We owe so much to law enforcement. Please also pray for the other officer who was shot & is in stable condition.”

State Senator Chapin Rose spoke of finding out about the shooting. “This morning I found out that one of my best friends in the world was shot while on duty as a Champaign Police Officer responding to a domestic call – and while he is in stable condition, his partner, Officer Chris Oberheim, gave his life serving to protect those whom he had never met. My friend is a standup citizen, coached my son’s little league team, volunteers faithfully at our local communities AWANA church program for kids, and is defined by his faith. And while I do not know Officer Oberheim, this morning, I talked to numerous people who do. Both of these men displayed the courage and selfless sacrifice that defines our brave men and women in Blue.”