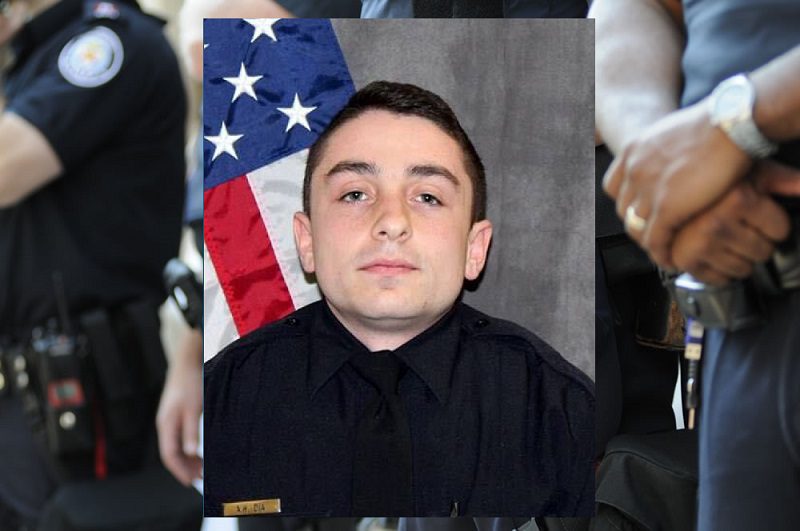 Ohio officials were saddened to announce the death of one of their men in blue, a police officer, a victim of gun violence on Saturday, July 4, 2020. Police Officer Anthony Dia, who was only 26 years of age, was shot in the chest in the parking lot of a local Home Depot store, by a disturbed individual.

Police were called to the Home Depot parking lot at the West Alexis Road location around 12:30 p.m. on the Fourth of July. An informal car show was being held by community members in the parking lot to celebrate the holiday. Officer Dia responded to calls about a drunk subject that was harassing the members of the car show. Dia was the first officer on the scene and approached the suspect to alleviate the situation. The man then pulled a gun, turning and shooting Officer Dia without warning. Officer Dia returned fire as he fell to the ground.

Other officers who arrived at the scene, attempted to provide life-saving measures but were unable to stop the bleeding. Officer Dia died at the scene. The young man spoke his last words into his radio, “Tell my family I love them.”

The suspect that had shot the officer ran from the crowd into a nearby wooded area where he turned the gun on himself and committed suicide.

Officer Dia was at the beginning of a long-planned career with the Toledo Police Department. It was a job that he loved; he gave all he had to protect and serve his family, friends, neighbors, and the city of Toledo. The Toledo Police Department has a long history in the Midwest, with its beginnings that can be traced to 1837. At that time, the first city charter was written, and it included the position of a City Marshall.

The City Marshall position was abolished in 1867 by way of the state legislature, giving way to today’s more modern police department. A quote from the early history of policing in Toledo, which is inscribed on the Fraternal Order of Police, is “The law of the wilderness was abandoned once Toledo became a chartered City.”

Today the department employs more than 600 full-time sworn officers as well as many civilian employees. These officers are responsible for the residents of Toledo and patrol an area of over 90 square miles.

Officer Writes a Goodbye Letter to His Wife and Children

His wife and two children survive officer Anthony Dia. He is also survived by his parents, extended family, members of his religious community, friends, neighbors, and his co-workers in uniform. He loved being an officer.

Recently, during the month of Ramadan, Officer Dia took some time to pray and reflect upon his life. During this time, he had written a letter to his family, a last will, almost predicting his oncoming death.

The grief for his wife must have been multiplied, having heard her husband’s last words – directed to her and his sons. “Tell my family I love them.”

Then to find that he had written a letter, to be read upon his death, the words must have brought back so much sorrow, but in moments a bit of peace and joy. He was thinking of her, waiting for her. As the letter was read to her and her young sons during the funeral, small parts did bring a smile to her tears. The message alone will become the most cherished gift he could have ever left behind.

Officer Dia also predicted what might be coming when he stated. “Every day I put on the uniform, it was my intention to protect the weak and innocent in my community from evil,” Officer Dia wrote. “I also hope that if I was shot, I was able to take the shooter with me. I hope I died with bravery.”

Toledo Mayor Wade Kapszukiewicz spoke at his funeral. He spoke of Officer Dia’s dying words to his family. He then quoted a line from As You Like It, by William Shakespeare. “Master, go on, and I will follow thee, to the last gasp with truth and loyalty.” Officer Dia’s last words to dispatch that night were, “Tell my family I love them.”

The Mayor continued speaking, facing a room filled with tears. “You can’t be loyal without the capacity to love,” he said. “Only a heart that is full of love has the capacity for loyalty.”

At the close of the funeral, Officer Dia’s last words were played over the loudspeaker for all to hear. “Tell my family I love them.”

In the final part of his message to his family, he reminded them that he would be waiting for them. Officer Dia wrote, “This is not our final good-bye. I know that one day, we’ll all see each other again. … From Allah, we come, to Allah, we shall return.”