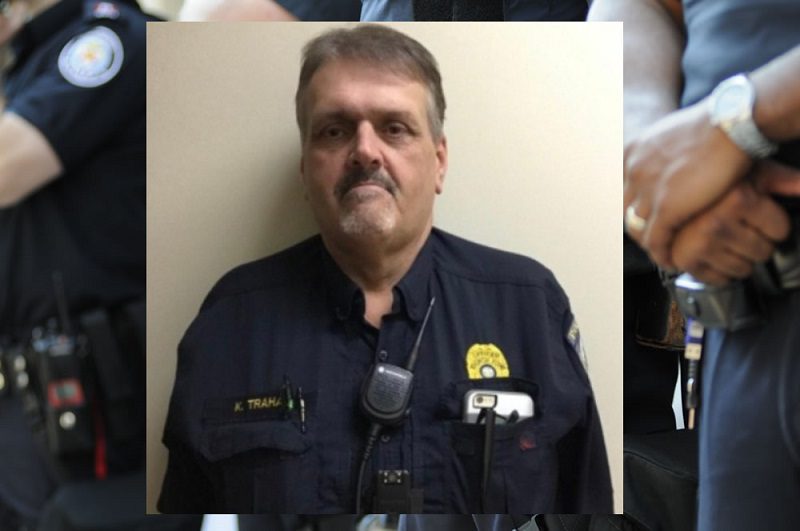 Captain Kevin Trahan, 59, died of complications after contracting COVID-19 on July 31. Captain Trahan had served in law enforcement for about 30 years as a deputy with Acadia Parish Sheriff’s Office and an officer with the Church Point Police Department. In April, Trahan returned to the job after being on leave to receive a stem cell transplant at MD Anderson Cancer Center in Houston to ward off an unspecified type of cancer. Trahan was a fighter, and after his battle with cancer, he returned to work, but being constrained to a desk was not going to work out for him because he was determined to give his best efforts on patrol. He is survived by his wife, Brenda (who currently serves with the agency), daughter, two sons, two stepdaughters, grandchildren, two sisters, and his sisters, brothers, and mother-in-law.

A Brother in Blue and a Brother-in-Law

After being hospitalized for a month due to COVID-19 complications he contracted in the line of duty, Captain Kevin Trahan died on July 31, in a Monroe hospital. Chief Thibodeaux wrote on his Facebook page on July 22 that the department and family were asking for prayers during Trahan’s stay in the ICU. After his diagnosis with COVID-19, Trahan suffered from clots in both legs, strokes, and pneumonia while he lay sedated on a ventilator. Trahan passed away at 10:30 pm Friday. The Church Point police officers escorted his body back to Acadia Parish Saturday afternoon. When Thibodeaux assumed the position of chief at Church Point, Trahan became his right-hand man. While the two men shared a close relationship from their time in law enforcement, the brothers in blue shared an actual family tie. Trahan was married to Thibodeaux’s sister-in-law.

Chief Thibodeaux’s spoke of the dedication of Captain Trahan and the sadness of the loss on his Facebook page. “With all Captain Trahan fought through and continued to do his job on a professional level, he was and always will be a true hero. Go and protect the heavens, my dearest friend, family, and my brother. The Lord needs you right now more than we do, I guess. You will be missed dearly.”

Funeral Procession for a Hero

Church Point Police Captain Kevin Trahan was laid to rest on Thursday, August 6, 2020. A Mass of Christian Burial was held for Trahan on Thursday at Our Lady of the Sacred Heart Catholic Church in Church Point. He passed away on July 31 at St. Francis Medical Hospital in Monroe. Pastor Patrick Broussard officiated the services, and the burial followed in Woodlawn Cemetery, Crowley. Trahan received a full law enforcement funeral where people lined Main Street in Church Point as the procession traveled from Duhon Funeral Home to the church. Church Point Police Department Officers escorted Captain Trahan’s body back from the hospital to Duhon Funeral Home in Rayne. Upon arrival back in Acadiana, the officers made a final pass through Church Point. Citizens paid their respects when the body of the fallen officer, Captain Trahan, was escorted through town.

Trahan began his career in law enforcement with the Acadia Parish Sheriff’s Office in July of 1994 and worked in various divisions while under several different Sheriffs. Trahan became a patrol officer under Chief Albert Venable. Venable said of Trahan, “He was the type of man who could talk to people which, to me, is a good quality in a police officer, and that is a quality I looked for when I hired an officer. He was a good listener, and he did his job very professionally.” Chief Thibodeaux took office in January 2019. Under his administration, Trahan was promoted to captain. As captain, he assisted in overseeing department operations and training new officers, and he also worked in the Narcotics and Warrant Division.

Reflections of the Man, Mentor, and Friend

Police Chief Thibodeaux remembered his friend and brother in blue. “Captain Trahan was a kind, loving man who loved his family and grandchildren more than life itself. Kevin was not only a coworker but was my family and brother. Kevin would take each young officer and try to instill the fact to them that you can do your job but do it in a professional and caring way.”

Church Point Police Officer Hunter Hare, a fellow officer, expressed his grief for the loss of Captain Trahan on his Facebook page. “I received some of the best advice from you when I started this career, and I will forever hold on to that advice and guidance you’ve given me. It was an honor to know and learn from such a great man. Captain Kevin Trahan was genuinely a good guy who was beyond willing to teach and show beginning officers the way to become a good officer. May you finally rest in peace as your legacy will never be forgotten.”