In Memory of Officer Larry Lasater 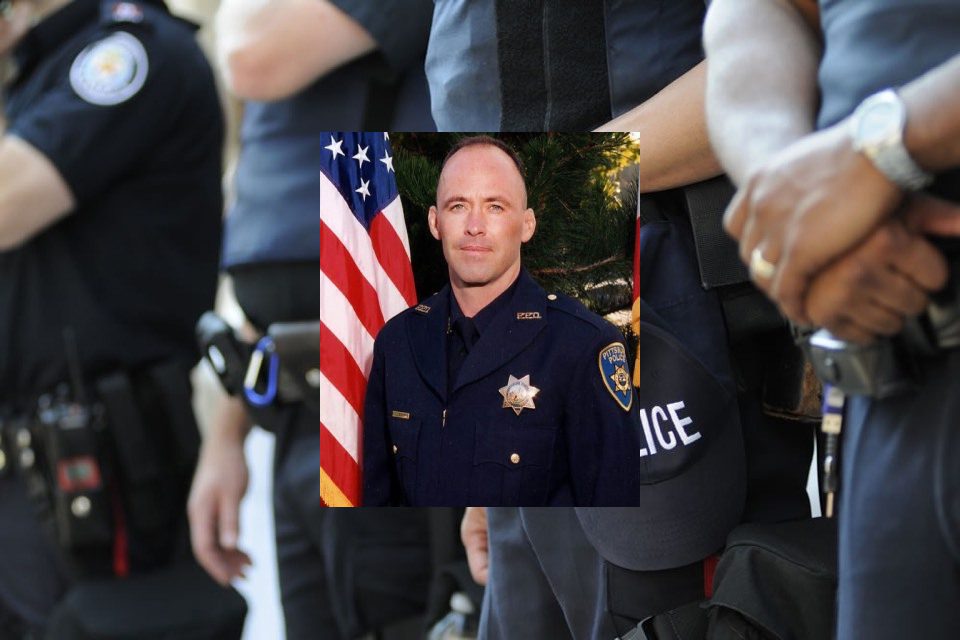 April 23, 2005 was a day that an entire community changed in Northern California. 1375 Buchanan Road in Pittsburg, California looks like a perfect slice of American commercial suburbia, it’s a strip-style shopping complex with well-maintained parking lots and islands, and the building exterior has inviting color schemes with brick columns throughout, all of which is inviting. Of course, anything inviting means it appeals to those with good intentions, as well as those with bad. And this was a day that that two young men with bad intentions arrived. The former anchor store of the complex was Raley’s Market, a chain supermarket for the region. Inside the store was, and still is a Wells-Fargo Bank branch. Alexander Hamilton, and Andrew Moffett formed a plan to rob both the store and the bank at gunpoint. They acquired guns, ammunition, and a car through third parties. They then carried out their plan.

The two entered the store and instantly barked orders, as they pressed pistols into the heads of store clerks and bank tellers, demanding cash. Shortly thereafter, the two ran out of the store, cash in tow, re-entered the car, and fled east on Buchanan before ditching the car at a trailhead for the Delta De Anza Trail, in nearby Antioch. Officers John Florance and Larry Lasater, a five-year veteran of the Pittsburg Police Department was the first to respond to the area. Larry spotted someone near a tree, but it was dark, and he could tell they disappeared, but was not sure where. As Lasater ran towards the tree he re-acquired sight of both Moffett and Hamilton behind the tree, drawing his service pistol and ordering the two to show their hands. It was in this moment that Hamilton first shot Lasater, hitting him in the neck once, the bullet then severing his spine. Hamilton then continued to shoot Officer Lasater as he lay on the ground. Moffett used this opportunity to hop a fence and continue to flee. Later, Hamilton would state he was too tired to run, which was his explanation for shooting.

Two other officers responded, and Hamilton took aim at them as well, continuing to shoot until he ran out of bullets, and slowly giving himself up. All the while, Officer Lasater lay on the ground, unable to receive aid quickly for his wounds. Once the scene was secured, Officer Lasater was rushed to a local hospital, but after several hours of surgery, doctors declared him brain-dead. Moffett was arrested in a nearby neighborhood, laying on the ground, shirtless, crying, asking officers not to shoot him.

It’s difficult to understand where the audacity to shoot police came from. And the excuse that Hamilton gave, that he was simply “too tired” to jump the fence sounds implausible. We would assess that he was experiencing excited delirium, and may not have had great control over all his muscle groups from second to second, but the idea that he simply couldn’t carry on doesn’t add up. For one, when criminals are too tired, they give up. And in the very rare instances they do hunker down, very rarely do they shoot with any exact aim. The fact that Hamilton’s first shot hit Officer Lasater in the neck says that Hamilton was aiming precisely, at Officer Lasater’s head. Couple this with the fact that both Moffett and Hamilton were clearly aware that police were in the area, based on the fact that one of them first spotted Officer Lasater, and then tried re-hide themselves behind the tree. That is significant evidence that Hamilton wasn’t tired, so much as he was cocky, and psychotic. He decided he didn’t need to run, he could simply shoot his way out of his problem. Hamilton concluded in that moment he was better than the officers he was facing. The saddest part about this is that Officer Lasater didn’t have a clear enough view of Hamilton, pistol in hand, trained on him. Once Hamilton shot Officer Lasater, his continued firing at the other responding officers also telegraphs just how tired he wasn’t. Hamilton, 18 at the time of this crime, was sentenced to death. He showed no remorse throughout his trial, to include his sentencing hearing, where he stated that he didn’t want to hear from Officer Lasater’s family, a procedure in court known as the victim impact panel, which is customary in homicide cases for a defendant to experience. Hamilton further stated that he didn’t care that he was sentenced to death, he just wanted to “move on.” We share our own thoughts that it’s not only hard to feel anything for Hamilton, but we hope he continues to not care about his sentence, even though an attorney continues to appeal his sentence at the time of this writing, 12 years after the death of Officer Lasater. Maybe the whole ‘moving on’ concept will finally take root and he’ll fire the attorney.

For Moffett’s part, it became complicated by the fact that he was 96 hours away from his 18th birthday. Moffett was sentenced to life without parole, and after several decisions between the California and US Supreme Court’s, Moffett experienced three resentencing hearings, where his original sentence was re-affirmed. The hearings, extremely painful for Officer Lasater’s family, did provide more perspective to the actions leading up to the crime. The new hearings caused Moffett to admit in open court to his complete involvement, which included planning the crime originally, acquiring the firearms and ammunition, along with the car they used, which was stolen to begin with. This new testimony surely added to Moffett’s involved in the murder of Officer Lasater in the ruling Judge’s mind, which led to the sentence being re-affirmed.

Moffett’s attorney argued that his meager upbringing, combined with drug use caused him to experience a lack maturing in his brain, which led to his poor decision making, along with being raised by his grandparents, instead of by his parents, claiming his father was not in his life. Moffett even said on the stand that he deserved forgiveness from Officer Lasater’s family, because he had shown growth over the five years he’d been incarcerated up until his final sentencing. Surely, Moffett’s perspective has changed, and to say he’s experienced no growth over time would be unproductive. But what hasn’t changed is his duplicity. He supplied all the elements of the crime, but apparently felt the need to employ someone else, and judging from the actions of Hamilton, Moffett picked him for his lack of humanity. We’ve been made aware of websites started on Hamilton’s behalf, which recount this incident in a false narrative, marketed by pen pals that he’s in contact with. The written accounts were so false in fact, it prompted their removal.

While we’ve not found source material covering Hamilton’s criminal history, we’ve noted that Moffett’s is so thorough, in charges, post-conviction agreements he did not meet, failed probation terms, along with new charges while on probation, and even crimes committed while incarcerated as a juvenile, that the idea that either of these two criminals have anything resembling remorse, it would be nothing short of a miracle, even if Hamilton’s history is only half as thorough as Moffett’s, which is probably an understatement.

Officer Lasater and his wife had a conversation about the impact of saving others if their grimmest fears came to pass, through the self-less act of organ donation. It was said at the time of Lasater’s death, that his organs were used to save the lives of three other people. Certainly, this last act, however painful for his family, is a direct reflection of a life in service to the lives of others. Lasater was a US Marine Corps veteran, he served as a commissioned officer, attaining the rank of Captain, working as a Tank Officer. After a six-year stint, Lasater left the Marines to transition back to civilian life, and provide his family with a stable home environment. He was selected for employment with the Pittsburg Police Department, and once he entered academy, he maintained a level of readiness that can only be described as that of a Marine, as he took charge of teaching other recruits how to prepare uniforms, and likely provided mentorship to some as well. He received a leadership award at the academy that was rarely ever given to officers, let alone recruits, and the award was subsequently named after him. Laster’s son, Cody, arrived two and half months after his death.

The City of Pittsburg has named a park after Laster, and a playground within it after his son. This is a sign of the lasting impression that Lasater left on those in the community, because this is not a typical response to an officer losing their life by the community. Lasater was known as a family man, and it makes sense that a park be dedicated to him for that reason alone. And it’s a terrible shame he isn’t here to be in his son’s life. Cody’s words were shared in court during the last re-sentencing hearing for Moffett part of which was, “My dad is handsome in every picture he takes. I heard my dad told good jokes. I would like to see how he draws. My one wish is that my dad was still alive.” Our hearts go out to the entire Lasater family.

In memory of Larry Lasater.