In Memory of Officer Katherine Thyne 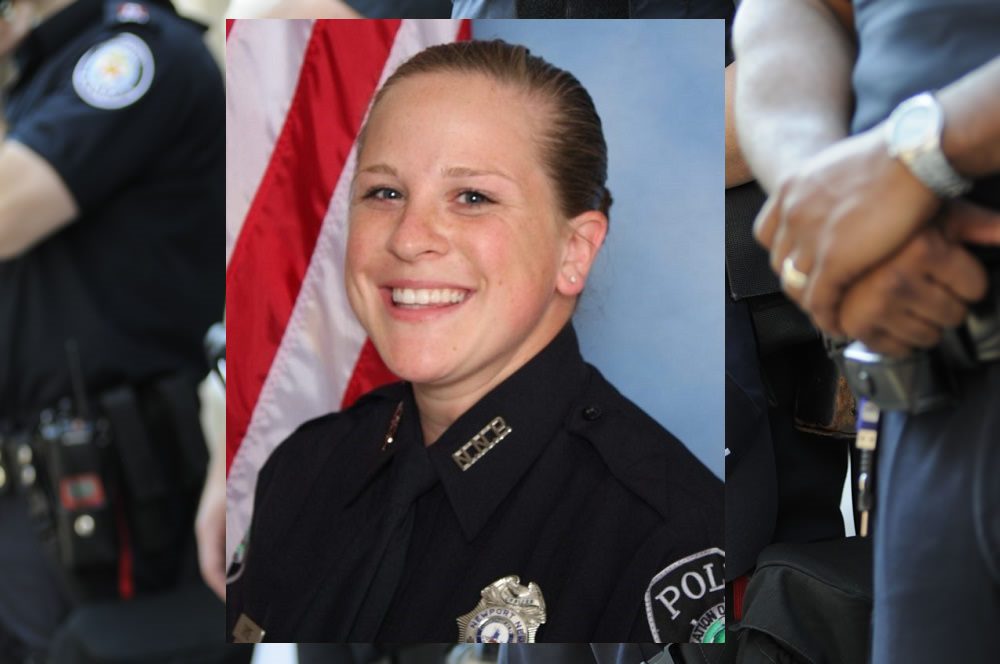 Thursday night, January 23, 2020, Newport News Police Department began the process of gathering for a press conference to announce the loss of one of their well-loved members of the force. Officer Katherine Thyne was a new recruit officer who had joined the department in November 2018. She graduated from the nearby police academy in June of 2019. She was a beautiful young 24-year-old mother of a sweet 2-year-old girl. Service and smiles were both part of her innate nature as she had already served her country in the US Navy, and her smile was considered contagious, not only with her co-workers, family and friends, but even with those she pulled over on the road.

Police Chief Stephen Drew described Katherine, who everyone knew as “Katie,” as a “true hero.” He went on to say that because of her commitment and love for the community and willingness to serve and give her life to others, her loss will have a lasting effect on the department and the entire community forever. Officer Thyne was at a point in her life where she was fulfilling her dreams, she had always wanted to be a police officer.

She still volunteered in a variety of ways in the community outside of work. Everyone knew and loved her. Though she was from New Hampshire, once her tour with the Navy ended, she settled in Newport News and committed to the community to make it her home and work to make the area a better place for everyone. From 2013 to 2018 she enjoyed her time serving in the US Navy, she was stationed at Norfolk, and also spent time on the USS Abraham Lincoln Aircraft Carrier.

She continued to volunteer for the Navy reserves. She was popular with the kids as she volunteered at the local Boys and Girls club, coaching a girl’s three on three basketball team for the Chief’s Challenge League. The league has decided that in her honor, games will continue on Saturday, because she would want that for the kids.

She lived with her partner and her two-year-old daughter. Her daughter, beautiful and blessed with the same charming smile, was mentioned by Chief Drew as he broke down during the press conference. Through his tears, he said that she looked just like her mother. She also left behind her mother, stepfather, and a brother; all of who are mourning the beautiful giving young woman. As Chief Drew stated to everyone present, “It’s OK to cry.”

Newport News, Virginia is a unique area of the United States. This was the city that Officer Katherine Thyne chose as her home when she ended her full-time Naval career. She made a commitment to protect its approximately 180,000 residents, which makes it the 5th largest city in Virginia. Newport News also includes the area known as the Hampton Roads. The city covers 120 square miles which is divided by waterways, like many coastal areas. There are 69 square miles of land and 51 square miles of water. This area is also known as the Tidewater area of Virginia, and has its own unique, very discernible accent.

Officer Thyne chose a tough city to protect, with multiple sections that had their own unique circumstances and issues for law enforcement to address. The city itself was incorporated into existence in 1896. The very earliest inner-city sections are still there today. The ‘North End’ is the location of the shipyard and coal piers. The earliest city sections became known as the ‘South-East.’ Public housing and lower income housing were mainstreamed after World War II creating an area that locals have come to know as ‘The Bottoms.’ Crime has plagued the area for a number of years.

Policing in high crime areas can be dangerous for officers. Violent crime rates are an epidemic. The murder rate rose to a high of 15.8 per 100,000 residents in the year 2007 and continues to climb. Other violent crimes have also risen dramatically. In 2008, Newport News was listed as the 119th most dangerous city with a population over 75,000 residents by the Congressional Quarterly Press. Enforcing the law in this environment means that each and every day, when an officer puts on their uniform and badge, kisses their family good-bye – they realize they may never return home again.

Officer Thyne pulled over a man in a car that she suspected had been smoking marijuana. It is illegal to be under the influence of any substance and drive a motor vehicle. She wanted to be sure that no one was driving under the influence or using illegal substances when she pulled over the vehicle. When she approached the driver and began asking him questions, she could smell marijuana coming from the vehicle. When she asked the suspect to get out of his car, he hesitated. In a panic, the suspect fled the scene. As he drove away, Officer Thyne’s clothing was caught in the door, and she was dragged for nearly a block. She was the first Newport News officer to die on duty in 25 years. She is also the first woman officer of the Newport News Police Department to have ever died in the line of duty. The suspect is in custody and facing felony vehicular homicide and other charges.

All of the state of Virginia, the US Navy, the City of Newport, the Newport News Police Department and all of the first responders in the area are mourning the loss of Officer Katherine ‘Katie’ Thyne. Her ‘children’ she coached in basketball are going on, to show the strength that she taught them, but in obvious grief for the hero they looked up to. Her family is devastated, her small daughter has barely had the chance to know her mother and may grow up with little memory of her. The years of service that Officer Thyne had planned to give to the community she had made her home is now lost, and no more. A void fills an area that is obviously in need of good people who care about their neighbors, friends and others less fortunate. She was that person. She was the young hero everyone in Newport News loved.