In Memory of Officer David Kellywood 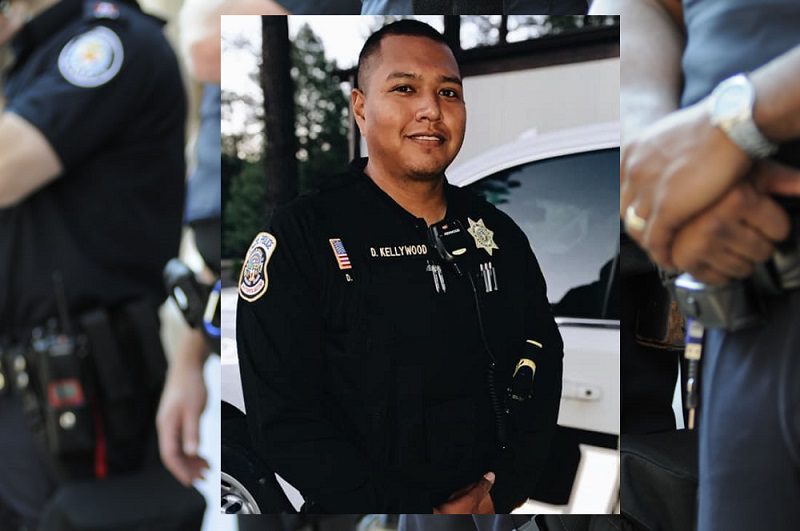 Early in the morning, around 1:00 am, Police Officer David Kellywood responded to the call of ‘shots fired.’ Officer Kellywood worked for the White Mountain Apache Tribe Police Department, in White River, Arizona. The call was related to a report of a domestic disturbance. There were witnesses present who reported hearing screaming and 6 total gun shots fired before police arrived.

With concern over the safety of community members or that someone could be injured, regardless of the danger of shots being fired, Officer Kellywood ran towards the danger. When he arrived in the area near State Route 73 and State Route 260, he observed a man who seemed suspicious. Upon approaching, the man turned and violently physically attacked Kellywood.

There was a great struggle, and during this physical altercation with the officer, the suspect fired his weapon, hitting Kellywood. Another officer, responding right behind Kellywood feared both for his life and the safety of the public. Feeling threatened, as well, he shot the suspect which ended the struggle. Both Officer Kellywood and the suspect were transported to Summit Healthcare Regional Medical Center, where they died of their injuries.

The most dangerous call an officer can receive is for a domestic violence situation. In fact, the National Law Enforcement Memorial Fund proved this in a study done in 2017, demonstrating that out of the top 10 causes for firearm related fatalities for officers, the number one cause was from domestic disturbances.

What was discovered was that it is the pattern of abuse that creates a more dangerous situation for police. The National Institute of Justice completed a study in 2008 that revealed a long-term pattern. The study determined that victims are only likely to get law enforcement involved after numerous or repeated assaults. At this point, the abuser has evolved, holding the idea that this is acceptable behavior. The mental attitude of the suspect of feeling that his abuse is justifiable creates a situation which is more dangerous for officers to confront.

A senior policy advisor for Gifford’s Law Center to Prevent Gun Violence explained it this way. When a home is broken into, or a car is stolen, people call the police the first time it occurs. People don’t wait for it to happen ten or twenty times before making the call to law enforcement for help. He explained that domestic violence is unique in that one way. That it can go on long term, with the victim suffering silently sometimes for many years before getting brave enough to make the call.

The good news that was found was that from the years 1994 to 2010, the rates of domestic violence in the U.S. have dropped nearly 60%. However, it is still a serious problem. One in four women have experienced severe physical violence from a partner, men are not excluded from this. The numbers for men are about one in seven having experienced this type of violence. Even with dropping rates, the numbers are staggering, the Centers for Disease Control and Prevention report the current rates of approximately 29 million women and 15.6 million men being victims of domestic violence in their lifetime.

Officer David Kellywood was well known to many on the reservation. He made a point to be an example to all those who knew him. He graduated from Blue Ridge High School in 2012. His life was still just beginning with his new family and chosen career path. He had a great deal of love for the people in his community that he would lay down his own life in order to keep the entire reservation safe for everyone.

The Fort Apache Indian Reservation is a designated reservation area that covers parts of Navajo, Gila, and Apache counties in southern Arizona. It has a land area of 2,627 square miles and a population approximately around 13,000 citizens. The White Mountain River Apache Tribe Police officers lived and worked in areas all throughout the reservation.

These officers have a significant amount of responsibility as they enforce U.S. laws and regulations, they are also respectful of the tribe, their constitution, lands, resources, and their traditions. The White Mountain Apache Tribe adopted their own constitution on June 18, 1934. The officers and their department work hand in hand with the tribal council to protect the safety and sovereignty of the people, their history, and their future.

Officer Kellywood was remembered dearly for his contributions by the local school districts. The school district felt compelled to put out their own condolences, thanking Kellywood for inspiring youth and being a great role model. They and all the children in the community will greatly miss the strength and commitment to others that he lived as an example to others.

Police Officer David Kellywood was a young husband and father. He had two very young boys. His wife, Kamellia Kellywood, posted her grief publicly on Facebook. She stated, “My husband died doing what he loved. My heart is so broken.”

Gwendena Lee-Gatewood, who is the Chairwoman of the White Mountain Apache Tribe, declared Monday, February 17, 2020, to be a day of tribal mourning. She authorized all flags to be flown at half-staff until the day after Kellywood’s funeral. The Chairwoman did state that everyone who knew him was deeply affected by this tragedy. She went on to comment, “We grieve with his loved ones, to support this community, to pray for all those who suffer loss and try to find some meaning, amidst our sorrow.” White Mountain Apache Councillor Jerold Altaha added that Kellywood’s loyalty and devotion to the Fort Apache Indian Reservation was what he will always be remembered for.

Others in the White Mountain Apache Tribe Police Department, will continue to hold the line, and follow the example of light that Kellywood set for them.