In Memory of Officer Breann Leath 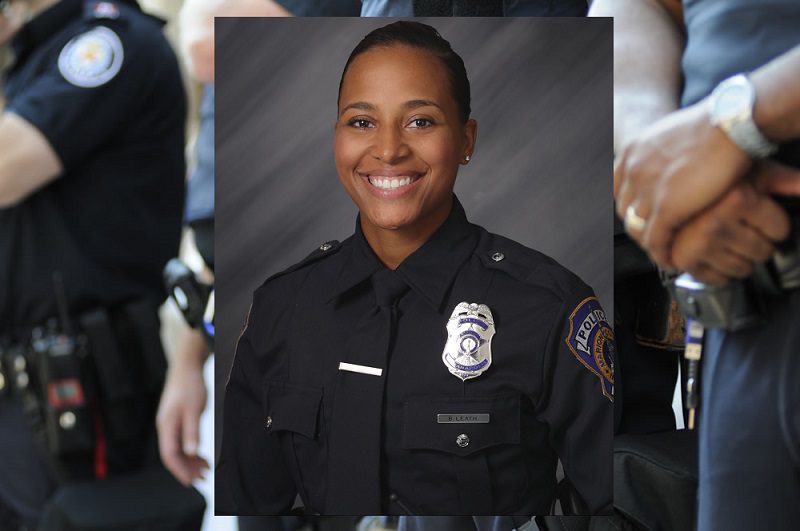 Indianapolis Metro Police Officer Breann Leath was shot and killed on Thursday, April 9, 2020, when she answered a domestic violence call. Officer Breann Leath was a military veteran who served with the National Guard. The 24-year-old officer has been with the IMPD for three years. She was living her childhood dream of serving her community as a police officer, having grown up with two parents, whom both serve with the Marion County Sheriff’s Office. Her mother is a dispatcher, and her father is a reserve deputy. Officer Leath had been a life-long resident of Indianapolis.

Around 3 pm, Officer Leath and two other IMPD Officers responded to a domestic disturbance on Indianapolis’ near Eastside. The call was in an apartment complex near Shadeland Avenue and 21st Street. As the officers were arriving, someone inside the apartment fired shots. Police Chief Randall Taylor stated in a briefing that shots were fired through the building structure. A woman inside the apartment was also a shooting victim. Both women were shot and injured, the woman inside the apartment, whose name has not been released, is being treated at a local hospital. Officer Leath was transported to a local hospital for treatment but later succumbed to her injuries.

Indianapolis Mayor Joe Hogsett commented about the situation. “She heard the call and went toward that which could do her harm because she knew if she didn’t, harm might come to others.”

IMPD Chief Randal Taylor offered this statement. “She is an example of the type of officer we want in this department.” He also explained that the shooting suspect was in police custody, charges were pending, and that the other woman who had also been shot, suffered non-life-threatening injuries.

Domestic violence or domestic disturbance calls are determined to be the most dangerous type of call that officers can answer. The Department of Justice has determined that 40% of the overall number of line-of-duty deaths can be traced back to domestic disturbance situations. Every day officers know when they leave their home, that they are putting their lives on the line for public safety, and it may be their last day to go into work. Though they answer a variety of dangerous calls, including robberies, drug crimes, and even fights, the results still show that domestic disturbance calls are the most dangerous type of call they can answer.

Studies show that from 2010 to 2016, 40% of the number of line-of-duty deaths were due to domestic violence calls. When the studies looked further into the cause of these deaths, they discovered a few other details. In all but one of these calls, the officer died from a shooting incident. In 35% of these calls where an officer was killed, there was only one officer on the scene.

Other details that were uncovered were that the majority of the time, the officers that were involved in fatal shootings were shot while they were outside. Two out of three were shot at close range. Even more stunning, out of all of these cases, 45% of the officers had been warned. They knew that the suspect may be armed and dangerous, or had made threats of this nature.

Currently, the threat of COVID19 has caused a significant increase in domestic violence calls. Seattle reported that during March, they had a 21% spike in their domestic disturbance reports. Even worse, the Montgomery County District Attorney in Texas reported a 35% increase in domestic violence-related calls in their area. Before the pandemic, the estimates showed that 20 people per minute in the United States were going through a domestic violence incident. Worse yet, the details show that 1 in 4 adult women and 1 in 7 adult men in America have experienced severe violence to the point of being kicked, punched, or severely beaten. Now that COVID19 has the country experiencing stay-at-home orders and social-isolation, the numbers are rising. It is getting even more difficult for people to escape their abusers. Abusers are become more enraged due to lack of income, feeling trapped in their homes, or other rage issues that are now multiplied, and they take these feelings out on others in the household.

The Indianapolis Metropolitan Police Department had its beginnings when it was officially created on January 1, 2007. This new metro police department or IMPD was created by combining the Indianapolis Police Department with the Marion County Sheriff’s Office. The IMPD has jurisdictional coverage of all of Marion County except for the Airport Authority, and a few smaller cities not incorporated into the city of Indianapolis, such as Speedway, Lawrence, Southport, and Beech Grove.

In its beginning, the department was under the control of the Marion County Sheriff. That all changed on February 29, 2008, when the department came under the control of then Indianapolis Mayor Greg Ballard. The IMPD is now a part of the Department of Public Safety, in which the mayor is in charge of appointing its Director. The Director then has the opportunity to select the current Chief of Police. The Chief is in charge of the day to day operations of the police department.

The IMPD, with its vast resources, shares the responsibility of covering all of Marion County with the Marion County Sheriff’s office. Both provide public safety and security to nearly 1 million residents who are located within 403 square miles. Marion County was created on April 1, 1822. It was in anticipation of moving the state capital. The state capital had initially been in Corydon, Indiana, and was moved to the city of Indianapolis in 1825. It was after this time, the city and the police department experienced rapid growth.

Officer Breann Leath left behind a young son and her parents. It is a terrible loss for a family so close to law enforcement. Leath had just been teaching her son how to ride a bicycle. Her family, extended family, and her co-workers are mourning her unexpected loss. It has been a tragedy for all of Indianapolis. The loss is causing distress to all those who have gotten to know her as an officer. She had planned for a long career serving the people of Marion County.

Indiana Governor Eric J. Holcomb offered a statement to Hoosiers regarding the shooting. “Officer Leath gave her life as she answered the call of duty. Janet and I are heartbroken for her family, friends, and the Indianapolis Metropolitan Police Department. I ask every Hoosier to join me in honoring Officer Leath’s courageous service and dedication to her community. She will be forever remembered for being the finest among us.”