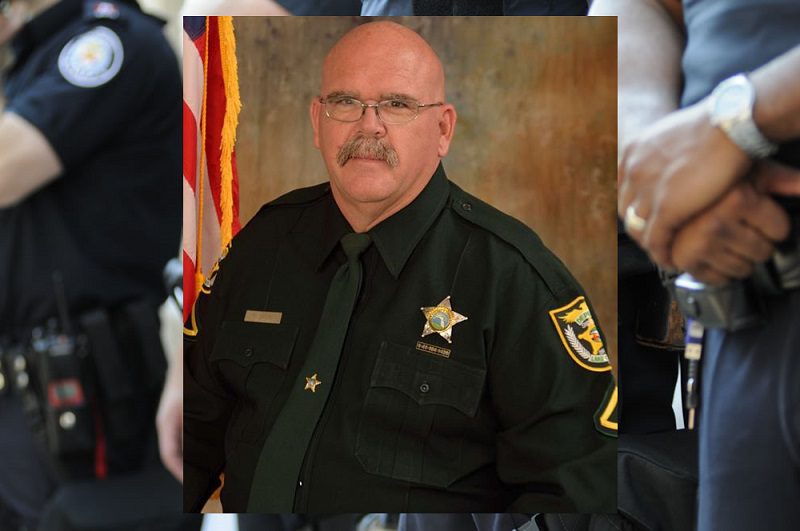 On Thursday, July 16, 2020, Master Detention Deputy Richard “Rick” Barry, 58, passed away at AdventHealth Waterman in Tavares, Florida. Deputy Barry was a US Air Force Veteran and was employed with the Lake County Sheriff’s Office for 24 years. Deputy Barry died from complications of COVID-19 after contracting the virus during an outbreak in the Lake County Detention Center in Tavares, Florida. His 25th anniversary would have been in August. Deputy Barry is survived by his wife, Bria, and their son, Brennan, two sisters, a brother, sisters-in-law, brothers-in-law, aunts, uncles, 28 nieces and nephews, and countless co-workers and friends.

A Brief History of Deputy Barry

Richard “Rick” Mark Barry was born January 6, 1962, in Ayer, MA, and grew up in Dracut, MA. He attended Dracut High School and was quite the sportsman as he was the center for the football team, he also played baseball and hockey. He continued his love of football and played while he attended Maryville College in TN. In July of 1981, Rick joined the United States Air Force and was stationed in Germany. He served as a telecommunications systems/equipment maintenance specialist. Rick earned the Air Force Training Ribbon and also the Air Force Good Conduct Medal.

After his service with the Air Force, Rick worked in several different fields at different companies and was even a tattoo artist. He became bored with the cold weather in the northeast and yearned for warm weather and new opportunities, so he headed to Deltona, FL, in 1991. He worked as a plumber’s assistant until he wanted a change. As an avid motorcycle enthusiast, Rick took many solo road trips covering thousands of miles and camping along the way. Rick would often hop on his bike and ride miles to get to the best food spots. Rick was a hardcore New England Patriots fan, and his #1 house rule was, “if you lived in his house, you had to love his Patriots.”

Rick completed the Basic Corrections Operations Recruit training class while in attendance at Daytona Community College. In October 1994, he started his profession as a Corrections Officer at the Volusia Co Sheriff’s Office. He joined the Lake County Sheriff’s Office in August of 1995. Rick, wishing to further his knowledge and education, took incentive courses that include Line Supervision, Field Training Officer, Discipline and Special Confinement Techniques, and Instructor Techniques. Rick served as a training instructor for recruits at the Institute of Public Safety after his further training. In October 1999, Rick completed the Cross Training Corrections to Law Enforcement course, which permitted him to be dually sworn in as Detention Deputy as well as a Deputy Sheriff. In 2005, Rick was transferred to the Fugitive Extradition Unit, where he remained until his death on July 16, 2020.

His peers will best remember Rick for being a gentle giant with a big heart and kind spirit. He had a loud and boisterous voice, with a bright Boston accent “R”s that could distinctly be heard in the halls of Lake County Jail. Rick had two main priorities: first was his love and dedication to his family; the second was his excellence in law enforcement. Rick continued his love of sports with his son, Brennan. He even took the time to learn lacrosse, one game in which he had never participated. By learning lacrosse, this enabled Rick to assist Brennan in sharpening his skills. Rick even converted the yard on the side of the house into a lacrosse field where he and Brennan would practice passing balls. Rick took an active role in Brennan’s school and sports activities. He attended every parent meeting, addressed all school issues, chaperoned every field trip, and could always be seen (and primarily heard) on the sidelines cheering for Brennan. For many years, Rick also served as both assistant and head coach for TYFL (Tavares Youth Football League).

Rick was also a God-fearing man, read his Bible daily, and spoke of God’s goodness and wonders. He was a member of New Vision Community Church and served faithfully as an usher for many years. Rick’s dedication to his wife, family, and excellence of service as a Master Detention Deputy is a shining example of the character he displayed. Rick will be missed by all the lives he touched.

Lake County Sheriff’s Office stated in a news release that Deputy Barry had been assigned to the jail as a detention deputy in the extradition unit, where he worked regularly. When inmate transports were halted earlier this year due to the pandemic, Barry was moved to supervise inmates in the jail. Deputy Barry tested positive for COVID-19 on June 16 and had since been quarantining in his home. His death marks the second deputy who died of COVID-19 at the Lake County Jail. On June 17, the Lake County Sheriff’s Office confirmed to WESH 2 News that there were 100 confirmed cases of coronavirus at the Lake County Jail. Out of that count of 100 cases, 6 were employees, and 94 were inmates. By July 10, the count rose to 135 inmates, 30 employees, and two nurses, all of whom had tested positive for COVID-19. A mere six days later, on Thursday, July 16, there were 161 cases of COVID reported at the jail, including 131 inmates, 28 employees, and two contract nurses.

Co-worker and friend from the Lake County Sheriff’s Office, Lt. John Herrell, shared his condolences with his late friend’s family. “The Sheriff’s Office is grateful for his service and is praying for peace and comfort for Barry’s wife, Bria, who is also a detention deputy, their son, Brennan, and all who knew and loved him.”

Church member and friend Renee posted her thoughts about Deputy Barry and offered prayers of support to his family and friends. “Rick was such a good man in so many ways. We will miss him at the New Vision Community Church and will continue to pray for peace to come to your hearts with the loss of your husband and dad, Bria and Brennan. He was so talented and loving and hearing all these beautiful, and happy things said about him today only made it more real. Love & blessings to you both.”

Co-worker and friend, Bobby Lou, posted his heartbreak for the family of Deputy Barry. “He was such a great guy… I always loved working with him. Very heartbreaking!”

Fellow officer Sergeant Darren Weisse of the Tufts University Police Department also posted his thank you to Deputy Barry, who gave the ultimate sacrifice to his community. “RIP Master Detention Deputy Barry. Thank you for your service to the country and the citizens of Lake County.”