In Memory of Master at Arms Oscar J. Temores 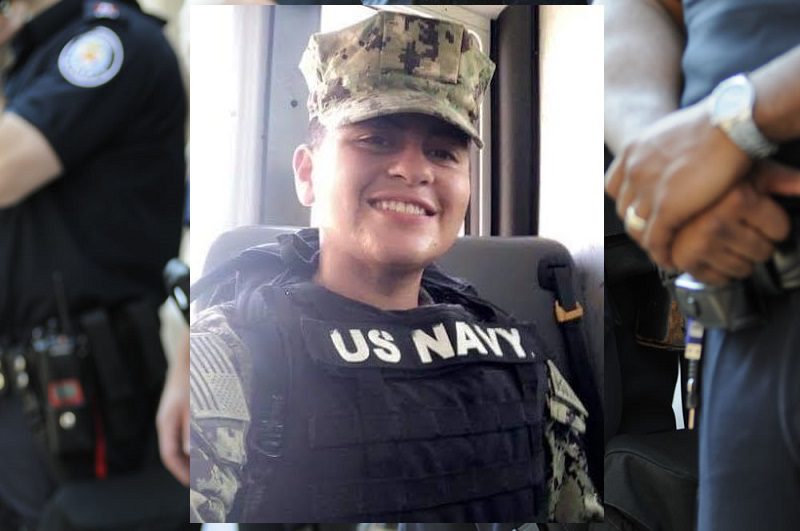 It was approximately 7:35 pm on November 30, 2020, when a vehicle rushed through Gate 8 at Fort Story off Atlantic Avenue, entering through the wrong way, forcing their way onto the base. The suspect was driving at a high rate of speed, and the military guards at the gate immediately called for assistance. Master at Arms 2nd Class Oscar J. Temores heard the call and began to respond. As MA2 Temores approached the scene in his patrol car, the suspect intentionally struck his vehicle in a head-on collision at high speeds.

MA2 Temores, age 23, was critically injured and was immediately transported to Virginia Beach General Hospital. It was a short time later that he succumbed to his injuries. The driver of the other vehicle was also injured and was swiftly taken into custody. He is being investigated as to his primary motive for entering the base and conducting a terrorist attack upon an active United States military base.

The news fell hard upon Ricky Temores, the older brother of Oscar. They were extremely close during their entire lives. Growing up, they were only a year apart in age and shared a bedroom. They had a ritual in their room whenever they watched scary movies together. Oscar would slip over to Ricky’s bed, for comfort, and to let Ricky know he was there for him, too.

The idea became a part of Oscar’s future as a protector; it was an innate part of his personality. They grew up together in Lemoore, California, but it had always been Oscar’s dream to join the U.S. Navy since he was a young boy.

Frenchman and physician, Dr. Lovern Lee Moore, first made his home on the shoreline of Tulare Lake in 1871. This area would later come to be known as Lemoore, California. Tulare Lake, at that time, was the largest freshwater lake in the United States outside of the Great Lakes. At that time, pioneers and a few farm families dotted the area.

Lemoore took steps to organize the area farmers into a community, build a post office, and plot out what is now the city of Lemoore. It was formally organized in 1872. The town officially celebrated becoming incorporated on July 4, 1900. The official incorporation began the citizens’ involvement in political elections and having an elected city Council.

The Lemoore Army Airfield opened in 1941 as an Army Air Forces training area. The federal government began by acquiring land to open the Lemoore Basic Flying School. However, in 1961, the Army Airfield was converted over to the Naval Air Station, Lemoore. Since then, it has become the most extensive Master Jet Base in the Navy. Today, NAS hosts five carrier air wings, with the majority of planes consisting of F-18’s and F-35 jets.

Today, Lemoore has a population of over 25,000 citizens. Perhaps growing up in a community heavily influenced by this large Naval Air Station fueled MA2 Oscar Temores’ dreams to join the U.S. Navy. Joining the Navy led him on his path from Lemoore across the country to the base he had currently made his home at, the Joint Expeditionary Base Fort Story, in Virginia Beach, VA.

MA2 Oscar Temores was serving his country at the Joint Expeditionary Base Fort Story. It is commonly called Fort Story, by both locals and Navy personnel. It is located in Virginia Beach, Virginia, at Cape Henry, the entrance to the Chesapeake Bay.

It became a military installation in 1914 when the Virginian General Assembly designated the land for the U.S. Government to erect fortifications or other military use. The base was named for General John Patten Story.

The country lost a hero with the death of MA2 Temores. The Navy lost a valued member of their service and military police force. For the Temores family, the loss was so much more. For everyone, Oscar strived to be the hero. For the entire country, a hero is forever gone from our midst, never to know what greatness he may have achieved. He is survived by his immediate family, brother, wife, and 2-year-old son, Damien.

California Congressman, T. J. Cox, wanted to honor the family of MA2 Oscar Temores in a unique way. He wanted to bring light to the sacrifice that Temores made in serving his country. He did this by inviting his widow, Bethany Temores, to be his guest of honor at the 2020 State of the Union Address in Washington, DC. Representative T. J. Cox released this statement. “People in Washington could learn a lot from the example of Master-at-Arms 3rd Class Oscar Temores, who served our country bravely. All service-connected families deserve our respect, and we owe it to them to honor the legacy of their loved ones, especially when they lose their lives in the line of duty. It’s a true honor that Bethany accepted my invitation, and I want to thank the entire Temores family for allowing me to honor the legacy of a husband and beloved family member.” He was, after all, an American Hero.