In Memory of Lieutenant Shirley Lanning 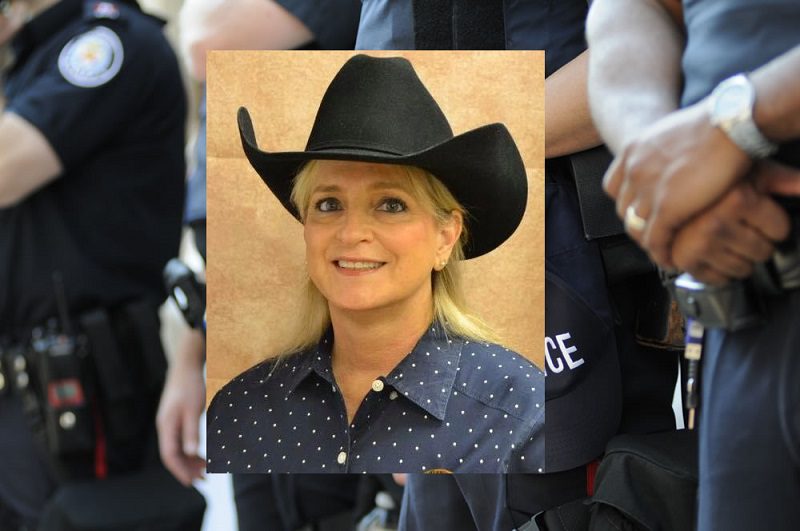 February 14, 2020, Valentine’s Day, Lieutenant Shirley Lanning of the Canadian County, Oklahoma Sheriff’s Office was called out on her last watch. Around 9:30am her unmarked police vehicle was involved in a head-on collision with two other vehicles. The three-car crash was severe and Lanning had to be extricated from her vehicle and rushed to the nearest hospital, where she was pronounced dead from her injuries. The passengers of the other vehicles sustained nonlife-threatening injuries, and are expected to recover.

The crash is currently under investigation. No one yet knows what happened that Lieutenant Lanning pulled out into oncoming traffic. The other driver attempted to avoid the collision but realized there was another vehicle beside them and there was nowhere to go. It was a traumatic situation, as co-worker and friend, Canadian County Sheriff Chris West was there to identify the deputy, Lt. Lanning, whom he admired for her good work.

Lt. Shirley Lanning had spent a lifetime, over 30 years, giving and serving her community. Her entire career was spent in law enforcement. Sheriff Chris West made a statement on the sheriff’s office Facebook page stating that Shirley had been taken from them suddenly. His heart was heavy as he requested prayers and support for the department, other Deputies, and for her husband and family. He said that her family is in a state of shock over the news and are completely devastated. She had been a great leader and friend to everyone she knew. All of Oklahoma is mourning the loss of this long-time law enforcement veteran.

The Canadian County, Oklahoma Sheriff’s Office where Lt. Shirley Lanning had chosen to finish out her career had an interesting history. The office began in 1890 when the first sheriff, James T. Godfrey was elected to office. The history description provided describes Sheriff Godfrey as a “busy man” as he had several other jobs simultaneously. He held not one, but two Mayor positions. He was Mayor of Frisco and Mayor of Reno City. He was also the U.S. Commissioner at Frisco.

He was followed by a “mystery” sheriff, named Orville Shelby, of which they know little about. However, his successor may have begun the American image of what a Western Sheriff is all about. His name was Sheriff T.R. ‘Tom’ Jackson. He was well known for wearing his big hat and cowboy boots along with a thick black long mustache. People for many years would swear he could be heard for a “country mile” when he would give a big shout.

This cowboy sheriff had much to deal with, just like in the western movies of our modern day. He had killings, claim jumpers, timber theft and even prize fighting to deal with. This department even comes with its own sense of humor as you’ll find its history written under the title “Sheriffin’s Not What It Used to Be.” With this much history, I can see why Lt. Lanning wore her big cowboy hat with pride.

The Sheriff’s office is located at the county seat which is El Reno, Oklahoma. The department is responsible for all of Canadian County. Lt. Shirley Lanning worked and protected every part of this community. She took upon herself to be responsible for 906 square miles and the lives of nearly 145,000 citizens.

Canadian County was named after the Canadian River which runs through the county. It was established officially in 1889 as the fourth county in the Oklahoma territory as part of the Oklahoma Organic Act. This act separated Oklahoma territory from Indian territory. The county has a lot of history in that this is the location where the last great battle between the Cheyenne, Arapaho, and the United States Army took place.

Before joining the sheriff’s department in Canadian County, Lt. Shirley Lanning first worked as a deputy at the Oklahoma County Sheriff’s Office. This office is located in Oklahoma City. Lt. Lanning enjoyed her work here, and had the respect of many of her fellow deputies. This office is a large metropolitan force, with many accomplishments. Recently this office solved a 20+ year cold case using DNA to identify a victim that was found covered in lime on the banks of the Canadian River. They are looking to solve the case but are extremely grateful that they can return this Jane Doe to her home and give her back her name.

The University of Central Oklahoma Campus Police is where Lt. Lanning made many friends. She spent many years here and earned her retirement. She was well-liked by her fellow men and women in blue, as well as the many students who attended the university. Even after her retirement, she still felt the need to continue giving back to her community. The call of the badge was in her blood. That is when she joined the Canadian County Sheriff’s office so she could continue to do what she loved the most which was to serve the people she cared about.

While investigators are still looking into the cause of this accident, automobiles and danger go hand in hand with law enforcement. Motor vehicle crashes are the leading cause of line of duty deaths for officers in law enforcement. Officers take many hours of additional road course training to help bring these numbers down. There can be many distractions while driving that can contribute to the cause including radios, police equipment, stress levels, urgency to get to a call, and driving too fast.

During the years from 2005 to 2017, in the United States, there were 775 officers who died from vehicle related accidents. Some were in their vehicles; others were struck by vehicles while they were doing their jobs or assisting victims. States have passed legislation to slow drivers when there are police or other law enforcement vehicles on duty, to move over to the farthest lane, or to slow down as you pass. These laws have helped, but more needs to be done. With training, legislation, public awareness, and other programs the numbers of law enforcement deaths from automobile accidents can be reduced.

Perhaps this could be done to honor all whom we have lost. Lt. Shirley Lanning was loved by her community, and it is a sad loss to all, on Valentine’s Day.