In memory of Lieutenant Chris Cunningham 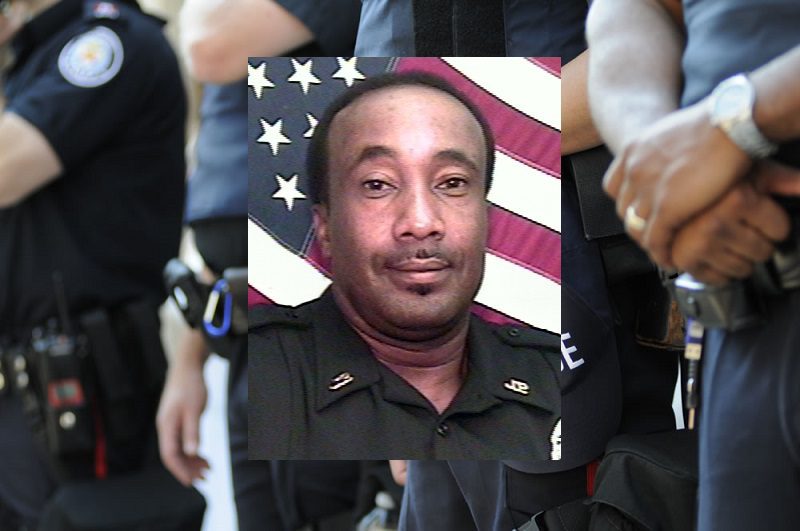 COVID-19 Takes the Life of a Georgia Police Lieutenant

Lieutenant Chris Cunningham, 48, died Wednesday, August 5, 2020, at UF Health Shands Hospital from complications of COVID19 after contracting the virus as the result of a confirmed exposure while on duty at the Jacksonville Sheriff’s Office, where he had been assigned for 22 years. His wife, Gwendolyn Lalisa; children and step-children Cameron, Christopher, Ashiya, Jozef, and Jasymne; three grandchildren; Carrie Lou, his mother; 2 siblings; aunts, uncles, nephews, nieces, extended family, and countless friends all survive him.

Lieutenant Cunningham’s wife, Gwendolyn, gave a brief public comment. “He embraced those in need as a personal mission to serve them. It’s so unfortunate this pandemic is taking lives by the seconds. Please, please communicate to the public the damage this virus does in the body.”

Lieutenant Cunningham was a U.S. Navy veteran and received his US Navy Military Training from 9/90 to 93. Lieutenant Cunningham was deployed in 1994 on the USS George Washington Tour. His last assignment transferred him to the Weapons Department in Jacksonville, FL. While serving, Cunningham received countless medals and honors throughout his Naval career, which ended on May 5, 1998. He transferred to Naval Reserve, where he remained active duty. After his discharge, Chris attended Columbia College and graduated with a major in Criminal Justice. During his 22 years at Jacksonville Sheriff’s Office, Deputy Cunningham worked his way up in rank and achieved the prestigious status of Lieutenant. Cunningham became the commanding officer of the Crime Scene Unit, latent prints, and the photo lab, where he remained until his death.

A Man of Faith

Lieutenant Christopher “Chris” Cunningham was born on 11/23/71, in Lincolnton, GA, to the late Zelma (father) and Carrie Lou Cunningham and was the youngest of 3 children. On November 16, 2011, Christopher Cunningham and Gwendolyn L. Prince – Cunningham were married. Chris was accepted into full membership in the African Methodist Episcopal Church on 2/24/14. Faith and family were at the foundation of Cunningham’s life, family and friends said. Chris Cunningham and his family worshiped every Sunday at the St. Paul AME Church in Jacksonville. “He had a relationship with God that helped him know that he was the best that God had made for doing what God wanted him to do,” said Pastor Marvin Zanders II.

The late Lieutenant’s body was moved from the Medical Examiner’s Office to Hardage-Giddens Funeral Home on Friday, August 6, with a Sheriff’s Office escort. Officers lined the route with their police cars, lights on, to show their respect. The Jacksonville Fire and Rescue Department was asked to participate as well as officers from all local agencies. Hundreds of residents paid their respects from the sidewalk along Jefferson Street from Eighth Street to Riverside Avenue. The escort then proceeded to the funeral home on Park Street.

The American flag covered his casket as honor guard members stood watch, motionless. Lieutenant Christopher “Chris” Michael Cunningham Sr. of the Jacksonville Sheriff’s Office was laid to rest Saturday, August 8, by family, friends, colleagues, and strangers who never met him. Bagpipes were played by The Jacksonville Fire and Rescue’s Honor Guard as the processional of the clergy, family, and friends entered the service. Following the service, the American flag that had been covering his casket was folded and handed to the family. Outside there was a 21-gun salute, a riderless horse, and a flyover by three JSO helicopters. The Lieutenant left earth with the highest of honors.

Many community members, coworkers, friends, and family came forward with statements about the loss of Lt. Cunningham. He was a local hero, a giving family man, and a protecting hero to all who knew him.

Jacksonville Sheriff Mike Williams spoke of the legacy that a great man like Cunningham left behind. He wanted to tell the Lieutenant’s family that they will always be a part of the Sheriff’s office. “His greatest legacy is that of being a son, brother, husband, father, and grandfather. Chris’s family know that you will always be part of our JSO family, and Chris will live in our hearts forever.”

Sergeant Jason Troeger gave his recollection of Cunningham as a friend and coworker. “Cunningham was a compassionate man who expected hard work and professionalism from his officers and never asked anyone for more than he would do himself. Cunningham treated them as his family and kept a watchful eye on them. Lieutenant Cunningham also liked to dance and walk by my office door in the morning, ask how I was doing and then break out into a dance.”

Heartbreak was expressed by both of the Lt’s two sons. Cameron Cunningham gave a statement that was sent out of grief to his father. “Dad, you supplied us with the tools that we will use for the rest of our lives. I really appreciate everything you did for us. We will continue to make you proud. You did your job, and now it’s time for us to do ours.”

The Lieutenant’s other son, Christopher Cunningham, Jr., also gave a closing statement addressed to his father. “I promise to keep your legacy, and your name lives on forever. I promise to have a business and take care of the family near and far just, as you would — had you still been here. I love you forever and ever, Dad until we meet again.”

The local news station’s crime and safety expert Ken Jefferson called Cunningham a giant of a man, personally and professionally. “Chris fought for his family; he fought for his country; he fought for the city. He finished his course. Chris kept the faith. On that dreadful day, when Chris was dispatched to heaven and received his last call for service, it hurt us.”

Sheriff Mike Williams reminded the community that Cunningham was a local hero that would forever be remembered “for his unwavering commitment to the job and to the agency he loved. We also recognize that his greatest legacy is not that of being a police officer. His greatest legacy is that of being a son, brother, husband, father, and grandfather.”