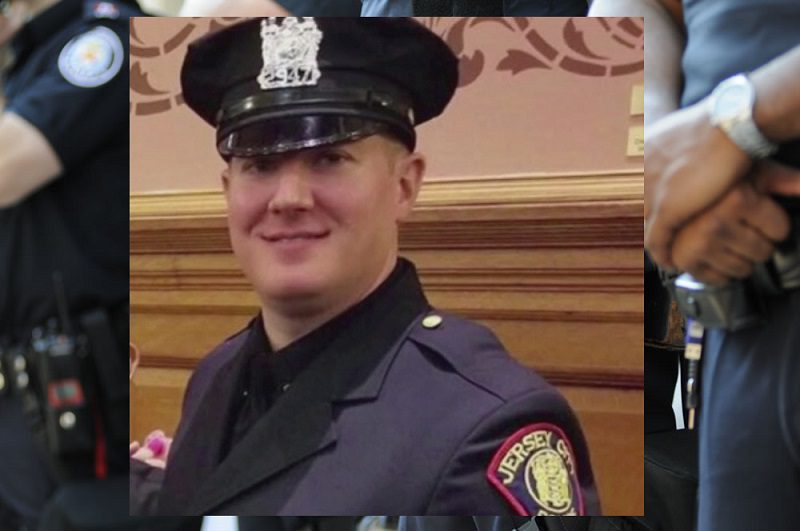 Two members of a radical religious organization shot and killed Detective Joseph Alan Seals of the Jersey City Police Department on Tuesday, December 10, 2019. He was 40 years old and had been a member of law enforcement for 18 years.

It was on that day that Detective Seals had agreed to meet with a confidential informant in Bayview Cemetery, in the Greenville neighborhood of Jersey City. When he arrived, he noticed a suspicious white van and made the decision to confront the occupants to find out the reason the van was parked in the area. It is unknown if he had called for back-up, or had made the call that it was indeed a dangerous situation.

He confronted two occupants, a man and a woman who had appeared to be acting in a suspicious manner were thought to be suspects from an area homicide. The two occupants of the van shot and killed the highly respected veteran Detective. Prior to this, he had been texting with his mother about Christmas gifts for his children, but had stopped responding around noon of that day. The two criminals in the van, which was also reported stolen, fled the scene.

Others Killed by Suspects

The two suspects, whose names were released but will not be mentioned here, drove to an area about a mile away. It is presumed this is an area they had been planning to target prior to shooting Detective Seals. The area is a well-known Hasidic neighborhood where many ultra-Orthodox Jewish families had recently relocated. As patrol cars were rushing to answer 911 calls and heading to the cemetery, the two offenders rushed and invaded the local kosher supermarket.

Upon entering the store, they began shooting. They killed the store owner, an employee, and one of the store’s customers. Then it was an all-out shoot out as police, swat, and helicopters surrounded the store. While this occurred, dozens of schools went on lock-down, and thousands of students were held in buildings for many hours after their normal school day ended. Bus services ended, the transit in that area of Jersey City was also suspended until the situation was over. The nearby exits off the New Jersey Turnpike was closed for hours.

A local resident, Willie McDonald, told the New York Times, “This is one of the biggest gunfights I’ve seen in a while, and I’ve been in Vietnam.” The police were under assault of gun fire for hours according to witnesses. Two officers were hit with bullets from high-powered rifles but have been released from the hospital. In the end, five bodies were found inside the market, including those of the two assailants.

Officials stated that this would be investigated for links to terrorism. It was one of the biggest, most violent crimes in recent history in the Jersey City area, which is the second most populous city in New Jersey. In the stolen vehicle, there were more guns and also an incendiary device. The shootout at the market was also next to a synagogue and school with more than 100 students. As the sound of gunfire was heard the community began to flee and was held back by swat for hours as they watched the violence unfold. The community mourns the victims lost but are grateful that many more lives were saved through the heroic acts of the Jersey City Police Department.

To be effective in combating terrorism in the United States the Department of Homeland Security (DHS) understands how important it is to rely on local law enforcement agencies. According to Volume 5 of the annual report for Partnerships to Promote Homeland Security, the conclusion is “the critical link between federal authorities and the public is local law enforcement.”

DHS recognizes that it is local law enforcement who has the best handle on what is happening within their own communities. There is no better group of individuals prepared to work with them and the community to report suspicious activities, coordinate local preparedness efforts, or to guard their communities against hate crimes. It is also only local law enforcement who has both the training and local knowledge to pinpoint critical infrastructures within their jurisdictions that could be vulnerable to attacks and are uniquely positioned to protect them and their communities.

In this case with Detective Seals, it was his knowledge of a recent crime, knowing the cemetery from having regular meetings with his informant, and automatically knowing that something about this particular vehicle looked amiss parked where it was located. He gave his life trying to protect his community, doing the job he loved. As a long-time veteran, he lived for his job. He was well known for fighting against gang violence, wrong doings, and especially for standing up to hate violence like the type he fell victim to on his last day. He would have done anything to stop these suspects from hurting members in his community.

Detective Joseph Alan Seals is the 35th law enforcement officer to be killed in the line of duty on the Jersey City Police Department. The Jersey City Police Department has approximately 975 officers on its force, which is growing significantly from 430 officers in 2013. The number of officers increased is to help crime-ridden areas of the city to improve communities by boosting police presence. They have also made significant changes in their methods of policing by directly involving communities. They believe that their residents are an essential tool to combating crime in their own neighborhoods.

Jersey City, the Jersey City Police Department, his family, friends, wife and five children all mourned the loss of Detective Seals. Hundreds attended his service at St. Aedan’s Church, where hundreds of police officers from all over the area came and stood in formation outside of the church. There were so many that the line of officers in formation filled the streets for blocks as bagpipes played Amazing Grace. Jersey City’s Mayor, during the eulogy called Seals one of the cities’ “Best officers,” and at the end, filled with grief and emotion, Police Chief Kelly looked over at his casket as stated, “Hey Joe, we got it from here.”