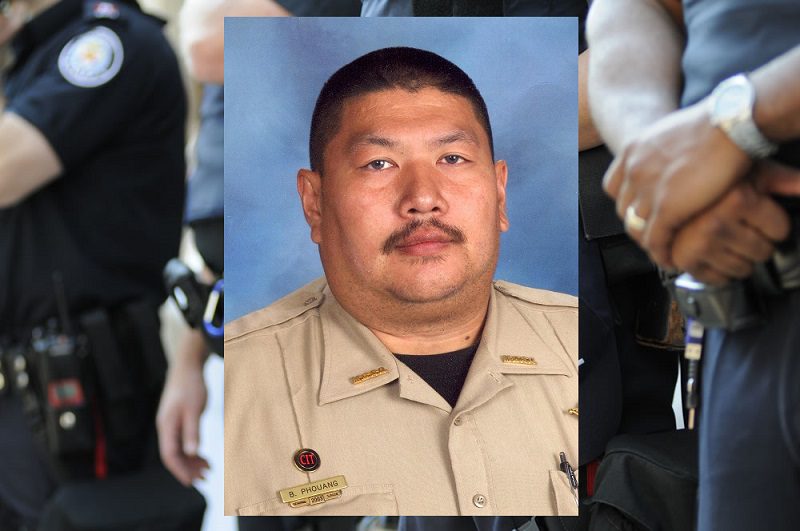 On March 31, 2020, a Montgomery County, NC, Sheriff’s Office Deputy, died from complications arising from coronavirus. Deputy Sypraseuth “Bud” Phouangphrachanh was 43 years old and lived in Candor, NC. He was being treated in the intensive care unit at First Health – Moore Regional Hospital in nearby Pinehurst.

“Deputy Bud,” as he was known to his co-workers and children in his community, thought he had been suffering from spring allergy symptoms. After seeking outpatient care, he was tested for the virus and sent home to stay in a 14-day Quarantine. His symptoms worsened, and he was admitted to the hospital on Monday, March 30, only to pass away the following day.

Deputy Phouangphrachanh had spent more than 14 years serving the local community as a member of the Montgomery County Sheriff’s Office. Before that, he had worked as a Candor Police Officer. Deputy Bud served as a Deputy and a School Resource Officer, where he impacted the lives of many school children who looked up to him. He was a DARE instructor who was dedicated to serving and mentoring the youth in both the middle school and high school in the Montgomery County School District. He was adored by the students, staff, and co-workers for having a big smile, teaching with laughter, and a fantastic sense of humor. He was even known to wear his ‘Superman’ costume under his Deputy uniform. The community and the children that looked up to him have genuinely lost a superhero.

Deputy Bud worked as a School Resource Officer. The Department of Justice created this designation. They defined the role of a school resource officer as a sworn officer who is responsible for the safety and security of both students and staff as well as working on crime prevention within the school. Through the Montgomery County Sheriff’s office, as a sworn deputy, Deputy Bud Phouangprachanh worked directly with both the middle school and high school in the Montgomery County School District.

School Resource Officers or SROs can make arrests and respond to service calls. They can also work on documentation for incidents both within the school and outside of the school. SROs often work very well with the youth of the community. They provide mentoring and help steer troubled youth in the right direction. They can also work with the school to give presentations on youth-related issues.

The students in the Montgomery County School District will be severely affected by the death of Deputy Bud. Many children in the district enjoyed seeing him each day, responded to his mentoring, and depended on his direction. Deputy Bud showed enthusiasm in his work with the kids, often with humor and laughter. He would often wear superhero costumes under his official deputy uniform, to bring a smile to the kids in the hallways.

For the state of North Carolina, the forecast is grim. On April 6, 2020, a team of epidemiologists and the state’s top universities’ data scientists have released new models regarding the evolution of COVID19. The state is expected to lift social-distancing and stay-at-home at the end of April. Experts are warning that this will devastate the entire state of North Carolina and overwhelm the available hospital capacities.

Three independent models studying the rates of infection came to nearly the same conclusion. The estimates show that almost 750,000 citizens of North Carolina will be infected by June 1, 2020, if social-distancing and home quarantines are not continued. While workers have been doing as much as possible to expand their health care capacities, the truth is that there will not be enough beds to handle the number of cases in the state should this occur. Experts have estimated that there are currently approximately 16,055 hospital beds available in the state. There will not be any room to treat infected patients or provide them with the care they need. The entire briefing experts have released to government officials is also available in full to the public.

Deputy Sypraseuth “Bud” Phouangphrachanh had committed his life to serve the public, with 14 years of his career being with the Montgomery County Sheriff’s Office. The department is responsible for the public safety of approximately 27,500 citizens. It is a rural county, with a total of 502 square miles.

The county originated as a part of Anson county. It was reformed and named by the North Carolina General Assembly in 1778. It was named after Richard Montgomery, who was a General in the American Revolutionary War who was killed in 1775 while attempting to capture Quebec City, Canada.

The county seat is Troy, North Carolina, which is where the Montgomery County Sheriff’s Office is located. Most of Montgomery County, along with the city of Troy, is located within the federally designated Uwharrie National Forest. The federal forest covers the majority of the county, making it a very rural, heavily forested community.

North Carolina Sheriffs are recognized as Constitutional Officers who are elected by the people they represent. The Sheriff, currently Chris Watkins, is expected to be on call 24 hours a day, seven days a week, 365 days a year. The Montgomery County Sheriff and his deputies are currently working to enforce North Carolina Governor Roy Cooper’s Executive Order 121. The department is engaging with the community by demonstrating effective social-distancing measures and also providing guidance and assistance to those citizens who are under stay-at-home orders. The Montgomery County Sheriff’s Office is working closely with other government agencies to reduce the spread of COVID19 effectively.

Deputy Bud Phouangphrachanh left behind a large family. Mourning his loss are his wife, five children, and brothers, as well as his ‘blue’ family members. The many students in the Montgomery County School District cared for and relied on Deputy Bud. They are also grieving the loss of their mentor and friend. Deputy Bud touched many lives. Funeral arrangements are pending, due to restrictions from the coronavirus.

The Montgomery County Sheriff Chris Watkins released this statement concerning the passing of Deputy Phouangphrachanh and his loss to the community. “Deputy Bud is survived by his wife, five children, brothers, and extended family. His family of co-workers is also mourning him, especially his brothers and sisters who wear a badge, stand tall, but never too tall to bend down and whisper a comforting word to a kid, as he did so well. Our hearts and prayers go out to his family, as well as the families of all those throughout this world who have endured the loss of loved ones in this crisis.”