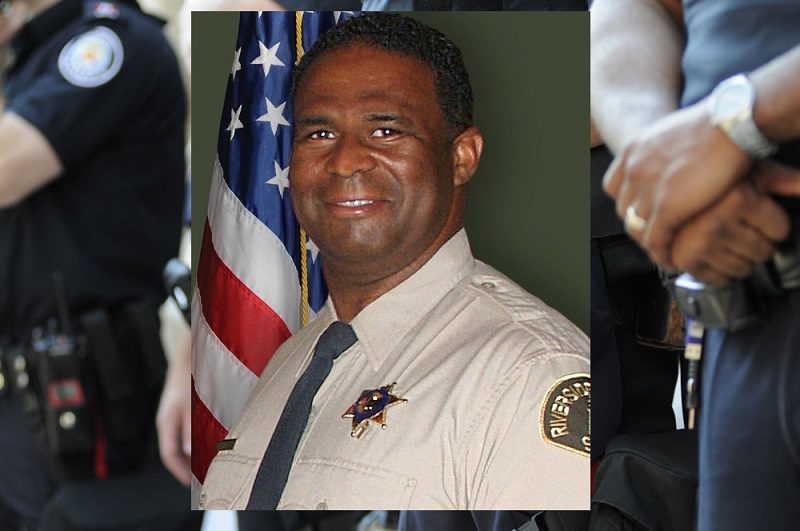 On Thursday, April 2, 2020, California’s Riverside County Sheriff’s Department lost a hero to the current health crisis. Deputy Sheriff Terrell Young was the first of two officers who died from COVID19 on the same day. It is a tragedy for his family and the department. It is also a significant loss to Riverside County, where Deputy Young was well-known and well-liked, willing to spend time going into neighborhoods to serve and find ways to give back that many would not consider spending extra time.

He was known for his smile. Always upbeat, his former partner claimed he was a ‘teddy-bear’ inside. Sheriff Chad Bianco had this to say about the loss of Deputy Young. “I’m seriously heartbroken. “We are reeling from the reality that this virus has taken the lives of two of our family members in the past 24 hours… He was a fantastic role model for his kids, especially for his daughter. Employees knew they could count on him for good advice. Terrell was always on time and very well-liked by his peers and supervisors, and always willing to lend a hand. He was always smiling. According to many, known for his smile, and he will be missed deeply.”

Authorities have concluded that Deputy Young may have contracted coronavirus from an inmate at the Cois Byrd Detention Facility in Murrieta, CA. Deputy Sheriff Terrell Young was a 15-year veteran with the Riverside County Sheriff’s Department and assigned to corrections duty at the facility. On March 16, he was the officer assigned to transport a sick inmate to the hospital. The inmate was checked out but returned to the facility. He began to feel unwell when starting his shift on March 22. A coronavirus outbreak was recently announced as a health threat at the Byrd Detention Facility.

Law enforcement duties have always been dangerous. The men and women who wear a badge to protect and serve still put their lives on the line for public safety. Today that job means something different. Each day as they prepare for their shifts, they know when saying goodbye to their families, there is a chance they may not make it home. Each day, they step out the door, head held high, and with a brave heart face the challenges required to keep us all safe. Now, as they prepare for their daily duties, they must also worry about an invisible threat, one that may not only take their lives, but they can also bring home to their loved ones and take their lives as well.

Officers are facing another challenge, just like every first responder in the United States, they are having difficulties getting factual information regarding the virus. They have to deal with a public that is confused and does not fully understand the threat that is happening across our country. While attempting to handle their regular duties of fighting crime and keeping citizens safe, they also have additional responsibilities of keeping people informed of social-distancing and ‘gently’ enforcing state and local stay-at-home orders. They face these challenges unprepared and facing shortages of personal protective equipment.

Without federal intervention, this problem will persist. More first responders will be lost to all of us. Finding ways to make sure they get the supplies that they need is a life-necessary, life-protecting need. Having the right information that helps officers understand how to handle their gear and how to disinfect themselves and their equipment properly after each possible exposure will be necessary to save lives.

Deputy Sheriff Terrell Young served the Riverside County Sheriff’s Department as a Correctional Officer at the Cois M. Byrd Detention Center. The center was opened in 1993 and named in honor of former Riverside Sheriff Cois M. Byrd (1986 – 1994). It is located in Murrieta, California. The detention center is under the charge and command of an assigned Sheriff’s Captain, and the day-to-day operations are under the responsibility of the Corrections Department Chief Deputy.

It has been announced that there is a significant health threat at Riverside County, California, correctional facilities. Sheriff Bianco has confirmed that test results have indicated that 25 employees and 11 inmates are currently infected with the virus. More test results are pending. Of the employees who have received their positive test results, 22 of them work at the Byrd Detention Center. Bianco has also tested and quarantined more than 160 inmates; results are pending.

Riverside County, California, was divided off from portions of both San Bernardino and San Diego Counties starting on May 9, 1893. In those early years, the Riverside County Sheriff’s Department was a one-person operation. Today, the department has more than 3000 employees and an annual budget of $502 million. The department is responsible for the unincorporated areas, and many incorporated cities by way of contract, for more than 7,303 square miles. The county holds a current population of more than 2.5 million residents.

The loss of Deputy Sheriff Terrell Young has left many to mourn the community hero and role model. He left behind his wife of 31 years and four children. While his family has received a great deal of support through social media, they have not been able to have the usual type of support given when an officer is lost in the line-of-duty due to the health threat the virus poses. Deputy Young’s family is also ill from the coronavirus and is recovering in-home quarantine.

Sheriff Bianco stated that it had been made even more difficult for everyone because there will be no traditional funeral gatherings to honor the deputy – which is a highly important held tradition in law enforcement. In light of needing to mourn, as well as recover from coronavirus themselves, the family has requested privacy at this time. Sheriff Bianco made a public announcement regarding the death of Deputy Young and the response needed from the citizens in the community. “If you want to honor his death, stay home … quit committing crimes.”