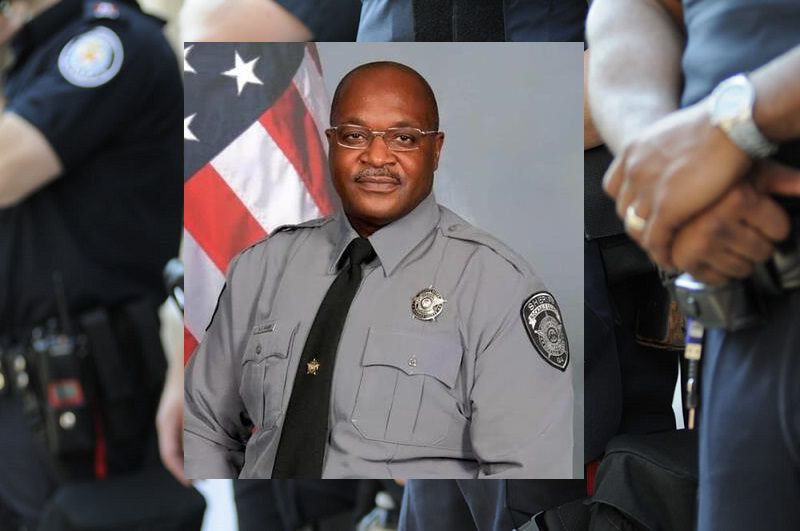 Deputy Sheriff Minor, age 54, passed away Wednesday, June 24, at the Rockdale Piedmont Hospital from complications of COVID-19 as a result of contracting the virus while on duty.

Deputy Minor was an 18-year veteran with the Rockdale County Sheriff’s Office. He served in the Uniform Patrol Division for 15 years, first as a patrol deputy and later as a school resources officer at Heritage High School and, most recently, at Edwards Middle School. Deputy Minor is survived by his loving and devoted wife Veronica; his loving daughters Ariel, Asia, and Shawanna; his grandchildren De’Marshae Travis, Tre’vion Travis, Jackie Daniels III; his brothers and sisters; a host of adoring nieces and nephews; and numerous cousins, relatives, and friends.

Deputy Steven Allen Minor was born on February 24th, 1966, in Lawrenceville, Georgia, as one of six children, to the late Evelyn Blackmon Minor and James Arthur Minor. His mother and father were both from Lithonia, Georgia. Steven spent his early years in Lithonia, Georgia, where he was given a Christian foundation. As a child, he attended New Macedonia Missionary Baptist Church in Lithonia. Steven attended Shiloh Elementary School, Shiloh Middle School, and South Gwinnett High School. Deputy Minor pursued his secondary education at Columbus State University.

Discovering the value in furthering his faith, Minor started his education in seminary school. He attended several theological programs at Lutheran Rice Ministry School in Lithonia, Columbia Theological Seminary in Decatur, and Atlanta School of Biblical Studies in Atlanta. Minor completed his programs and became an Ordained Minister in 1992.

Deputy Minor started at the Rockdale County Sheriff’s Office on Sept. 18, 2001, as a Detention Deputy within the Jail Division. Deputy Minor was promoted to a Certified Sheriff’s Deputy on Sept. 21, 2004, after completing the Georgia Peace Officer Standards and Training Council (POST) mandate academy. Deputy Minor then served in the Uniform Patrol Division for 15 years, first as a patrol deputy and later, as a School Resource Officer at Heritage High School and, most recently, at Edwards Middle School.

Deputy Steven Minor gave his all to his family and work, but he still made time to impact his community, especially the youth. As a School Resources Officer, he shared his time and knowledge to mold the next generation’s lives. He never forgot a name or face and took it upon himself to address the children’s needs to help them feel safer and less alone.

Minor was well respected and loved in the church communities. He served on the Ministry Protection Team at Springfield Baptist Church in Conyers. Springfield Baptist was a second family to Deputy Minor, and many there came to depend on him. Minor was also a part of the Security Ministry Team at the Redeeming Love Church in Conyers, where he served selflessly, providing security at church gatherings and events.

The Rockdale County Sheriff’s Office honored Deputy Sheriff Steven Minor on Monday, July 6. after having laid a wreath on his patrol car in a ceremony the prior week. They gathered at 10 am at 911 Chambers Drive, the Rockdale County Sheriff’s Office in Conyers, and then started a procession through Conyers. The public paid their respects by standing in line along the route. At Springfield Baptist Church, where the funeral procession ended, a balloon release took place in Deputy Minor’s honor.

Due to concerns of the pandemic, the sheriff’s office said participation was conducted with recommended social distancing guidelines in mind. Those that gathered along the processional route were strongly encouraged to wear face masks. Final remarks and a balloon release took place at Springfield Baptist Church after the procession.

Deputy Sheriff Steven Minor was a local hero, well respected by friends and neighbors, and gave everything, including his life, to protect the community he held dear. Many friends, coworkers, and family members shared their hero’s loss on various social media outlets.

Layla, a friend of local law enforcement and reporter with On Common Ground News, shared her knowledge of the Deputy to the community. “Deputy Minor was a friend to all the children in Edwards Middle School. He was goofy with the students and protective of the school. He told his life stories and ENCOURAGED students to be better! He was a public figure in the middle school and will forever be in our hearts.”

Chief of Strategy and Innovation with the Rockdale County Schools Cindy Ball expressed her sadness in the loss of an officer that had such an impact on children in the school district. “We are deeply saddened by the passing of Deputy Minor. He had a profound impact on the lives of so many RCPS students, staff, and families as a School Resource Officer (SRO) at Edwards Middle School and previously at Heritage High School. With his kind and caring demeanor, he was a beloved member of the RCPS family. We will remember him fondly and miss him greatly. Our thoughts and prayers are with his family, friends, and the community he loved and served so well.”

“You will be missed. To one of my first protective back up units in patrol in 2002 to me being your SGT. There was never a day you didn’t have a kind thing to say. You policed with empathy and compassion, so it was ultimately just fit for you to become an SRO, your purpose. You impacted so many who will become so great because of knowing you. Keep watching over us down here!” These words were shared by Captain A. Pilgrim, who was a coworker at the Rockdale County Sheriff’s office as well as a good friend.

Wendy Kochis, a CJIS Network Operator for the Rockdale County Sheriff’s Office, expressed her joy in working with Deputy Minor and tells of a man who showed enormous pleasure in work and daily life. “ I met Deputy Minor in 2008 when I worked at 911 for Rockdale county. Over the years, I got to know him on a personal level. He always had a smile on his face and something hilarious to say. As an SRO, he touched the lives of countless children & parents. It was just a blessing to know him. He will be missed greatly by family, friends, coworkers, and the public he served.”