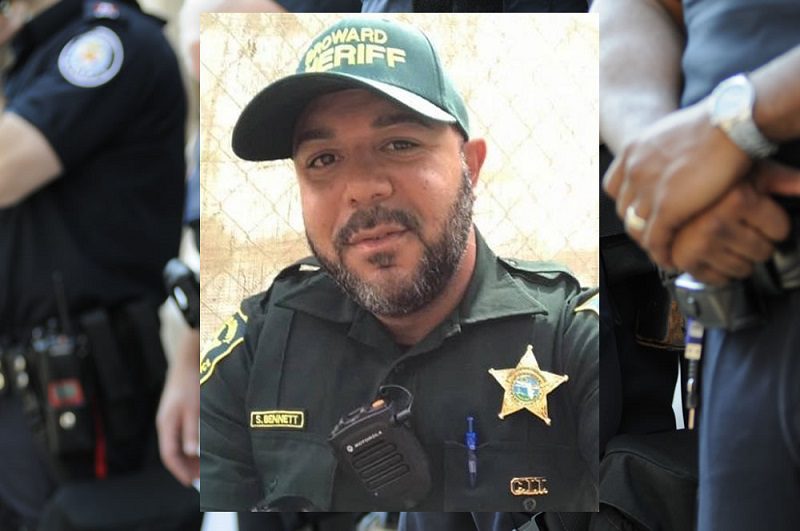 Deputy Lost Due to COVID19

On March 23, Deputy Bennett left work early. He was not feeling well. The next day, Bennett sought testing for the coronavirus. Four days later, he received his test results, indicating it was positive for infection. Broward County Sheriff stated that as of April 3, the department had had 21 employees with positive virus test results returned. Deputy Bennett is considered a line-of-duty death as he most likely contracted the virus while on the job.

Shannon Bennett was known by his friends and many in the community. He was working on trying to bridge the gap between the LGBTQ community and law enforcement. He intensified his efforts after the PULSE nightclub shootings in 2016. On Saturday, a make-shift memorial was outside his home as flowers were dropped off and left on the officer’s patrol vehicle. A long line of cars and law enforcement patrol vehicles could be seen surrounding the area as many stopped to pay their respects.

According to the National Order of Police, as of April 5, 21 officers have died due to COVID19. Many cities have yet to face their peaks with the virus; it is expected that this number will rise significantly. National Police Trainer, Travis Yates, explained that the nature of law enforcement does not provide for the ability to protect against infection. There is also a severe shortage of personal protective equipment as well as factual information on the disease. The lack of supplies makes it harder for officers as the spread in the community rises. It is predicted that the total number of officers that Americans may lose to COVID19 will surpass the numbers lost to 9/11.

Though Native American’s settled the region more than 12,000 years ago, Broward County originated on April 30, 1915. The Sheriff’s office also began in 1915 with the election of A. W. Turner, who received 295 votes and served for ten years. At the time of its inception, the county had 4,700 residents. Today that number has grown to reach nearly 2 million. The current department is the largest, fully accredited Sheriff’s office in the United States. It has 5,500 employees and a working budget of $930 million annually.

The current leader of the department, Sheriff Gregory Tony, is the first African American to head the department. The department is responsible for providing full-time law enforcement in 14 Broward County communities as well as covering all of its unincorporated areas, which equates to about 1/3 of the county’s 1,322 square mile area.

The department has several specialized units, including a School Resource Deputy Unit, to which Bennett was assigned. Other units include road patrol, Bomb Squad, the K9 Unit, and the Child Protective Investigations Section (CPIS).

At the Broward County Sheriff’s Office, Deputy Sheriff Shannon Bennett was assigned to serve as a School Resource Officer or SRO for the Deerfield Beach Elementary School. Many young children will be deeply affected by the loss of Deputy Bennett. An SRO is a fully sworn law enforcement who is employed by local law enforcement departments but is responsible for the safety of students and crime prevention in schools.

An SRO can be assigned a single school as a responsibility to monitor or may be assigned more than one depending on the size of the school or districts. As an SRO, Deputy Bennett would have worked with the school administration to provide and instill a sense of safety for students and staff. Student Resource Officer’s duties are comparable to those of regular police officers. Officers can make arrests when necessary; they can respond to calls, document incidents, and file reports. The exceptions for SRO’s are the challenges involved in working with youth. Most take this position because they feel a connection to helping kids and pointing them in a positive direction in life. Part of the responsibilities of being a School Resource Officer is to mentor students and also to conduct presentations for students on youth-related issues.

Deerfield Beach Elementary School was the school where Deputy Bennett served as School Resource Officer. The children whom he worked with every day are also victims of this virus as now they will also mourn a friend and mentor. The school is a historic school in Deerfield Beach, Florida. It is one of the oldest schools in the area.

The building is beautifully designed. It has a stucco exterior in a traditional Florida color scheme of salmon pink. It was designed by Thomas D. McLaughlin and Associates and built-in 1926 for the total cost of $55,000. Its historical value to the community was validated when on April 16, 1990, the U.S. National Register of Historic Places added the building to its list of significant historic structures.

Virus Leaves More Victims – Those Who Are Mourning

Deputy Sheriff Shannon Bennett leaves behind family, friends, and young students who are mourning his loss. They, too, are victims of the effects of coronavirus. His fiancé and partner, Johnathan Frey wrote this message on his Facebook page as a way to say goodbye. “My heart has been forever torn into two … I will miss you, dearly.”

Deputy Bennett’s mother is also devastated. At a time where funerals are delayed, and goodbyes are at a distance, she posted this on her page. “A mother’s heart is broken. I want my son but can’t and will no longer see him, touch him, can’t even kiss him goodbye.”

Darren Bennett, who is the brother of Deputy Bennett, had previously served for ten years in the same Broward County Sheriff’s Office. He stated this about his brother’s illness. “The shocker was, we thought he was getting better, and then it just went south so quickly, and that’s what this virus will do to you.”

Julian Calgaro, the mother of a young student who looked up to Deputy Bennett, expressed her grief. She stated that his smile and welcoming presence made her 11-year-old autistic daughter feel comfortable at school. “With my daughter having autism, I was very concerned about her, but he made her feel secure,” she said. “My daughter loved him. He was a great guy. He will be very missed on campus.”

Sheriff Gregory Tony urgently expressed a need to follow stay-at-home orders to help protect each other and officers. “If you truly support your first responders, then reduce our opportunities for having citizen contact. Because for every time we have to answer a call because someone’s non-compliant, it puts our lives at risk.”