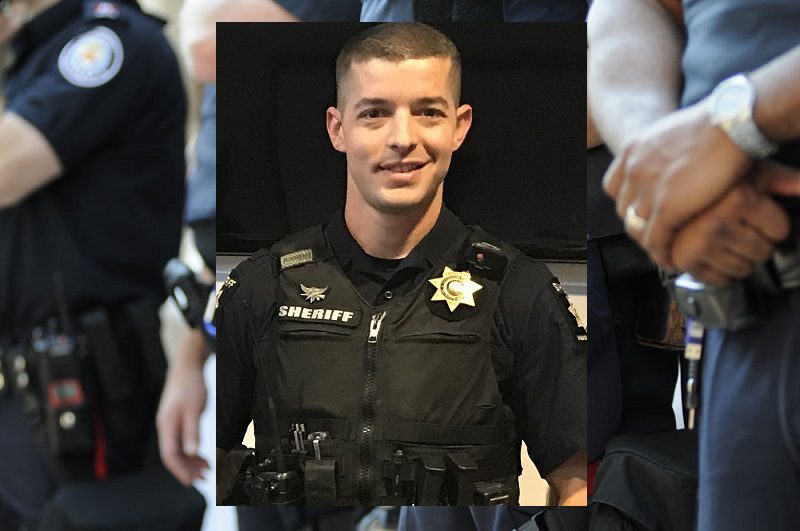 Officials in Henderson County, North Carolina, announced a deputy sheriff who was shot and killed attempting to stop a robbery in progress. Deputy Sheriff Ryan Hendrix, age 35, died on September 10, 2020 protecting his community from an armed car thief. He had worked serving his family, friends, and neighbors as a Deputy Sheriff with the Henderson County Sheriff’s Office for eight years.

Deputy Hendrix responded to a call of someone tampering with a vehicle. It was just after 3:00 am when a local citizen called 911 asking for help as he had two subjects who were breaking into his car. The citizen grabbed his weapon to protect his home, property, and family. After the homeowner yelled out to the suspects, one grabbed a crowbar and smashed out a window to the family’s home. The homeowner then confronted the thieves with his firearm. One or both of the suspects reached for weapons and fired back. There was an exchange of gunshots.

Hendrix and other deputies arrived on the scene and confronted the subjects. The offender who had fired the shots was wanted on a warrant for probation violation and was considered a multi-state offender. At first, both men seemed to comply with orders shouted by the officers. As he was ordered to raise his hands, the suspect pulled the firearm shooting Deputy Hendrix in the face. The other officers returned fire and killed the shooter on the spot. The shooter had a history of felony theft charges, grand larceny, and drug offenses. The second subject was then apprehended and is facing several charges.

The home where the shootings occurred was located near Bethea Drive and Piney Ridge Drive in Mountain Home, North Carolina. Deputy Hendrix was given life-saving measures and rushed to the nearest hospital. His family was told that he would not survive, and there was a loss of brain activity. He was declared medically deceased. Deputy Hendrix served his community and saved lives through his career in the Sheriff’s department. He had previously served the country as a U.S. Marine. In his death, Hendrix will continue to save lives as he had signed to donate his organs to help another continue to live.

Deputy Sheriff Hendrix was enjoying his career with the Henderson County Sheriff’s Office. The sheriff’s department serves Henderson County, North Carolina, and a community population of 101,000 residents. The department is well staffed with more than 225 sworn officers and many more who work in the agency’s administration. The sheriff’s office is located in Hendersonville, North Carolina.

The Henderson County Sheriff’s Office believes in community policing. Getting citizens involved helps keep the community safe. The department has created its own app that is available for download for free to residents. This app allows two-way communication between the residents and the sheriff’s department for local news, events, warnings, and crime. The department furthers the residents’ involvement in policing through Citizen Connect, which allows homes to access their security video footage to law enforcement to help reduce crime and keep neighborhoods safe and prosperous.

Hero in Life, Hero at End of Life

Deputy Sheriff Ryan Hendrix is survived by his fiancé and his two children. He had been planning a wedding with his fiancé the following month. His extended family, neighbors, friends, and coworkers share in the grief with the loss of a great compassionate man. After spending his life serving his community, he had chosen to continue to give back through organ donation. He realized that he could continue to save others in a situation where he could lose his own life. He was a hero in his life through his actions and hero again, at the end of his life.

The Hendrix County Sheriff’s Office gave a statement about the loss and service Ryan had shown during his lifetime. “Early this morning, while the world slept, Ryan responded to assist a family needing help when they became innocent victims of a violent encounter. We all know the tragic outcome, but Ryan refuses to let the story end there. Deputy Hendrix continues to exemplify a servant’s heart as an organ donor. He will continue to help strangers for a lifetime, even after making the ultimate sacrifice,” the sheriff’s office said. “Ryan’s family wants everyone to know that ‘Ryan was doing the job he was born to do and he died doing the job he loved.’”

Sheriff Griffin was saddened by the news and the loss of such a great asset to the community. “He has done an outstanding job in every aspect that he served in. Deputy Hendrix’s murder has been an enormous blow to the department. We are all a family, and we’re all hurting right now.”

Carolina Brotherhood made a statement on their Twitter regarding the passing of a fellow deputy. “Det. Ryan Hendrix, an 8-year veteran of the Henderson County Sheriff’s Office, was shot & killed this morning by a suspect. Hendrix was a 35-years old, Marine veteran & leaves behind two children. He was set to be married in October. #Brotherhood #CBH20 #SelflessServant #LODD.”